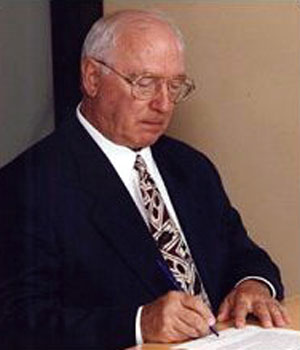 I was born in Winnipeg, married Elyse N. Samuels and we have three children, Susan, Tracey, and David - and four grandchildren. I was a law student with Andrews Andrews Thorvaldson and Eggertson and then joined in partnership with my father Joseph Halprin in 1951, and later with my brother Paul William*.

I was a co-draftsman of the Special Act of the Manitoba Legislature, which created the Jewish Foundation of Manitoba and served as a Director for some years and now on the Board of Governors and as a member of the Audit Committee.

I participate in the Manitoba Bar Association and other community activities pro bono and recently have represented religious organizations of diverse faiths, and re-incorporated the Hebrew Congregation of Winnipeg Beach. The complexion of the Jewish Community in Winnipeg has changed with the consolidation of activities into the new RADY Centre.

The Foundation will move and change with the times. It needs, yea, requires the constant input and planning of its members and supporters with financial contributions from every source to enable it to continue to fill its expanding and diverse functions, community needs and projects of merit.