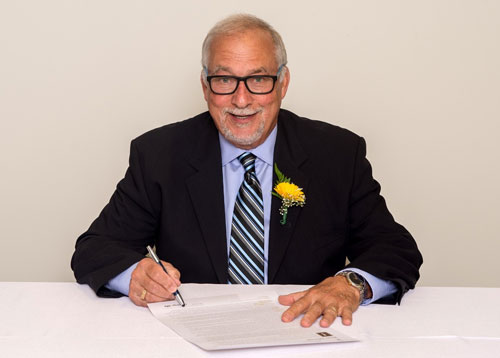 Richard signs his story for the Endowment Book of Life 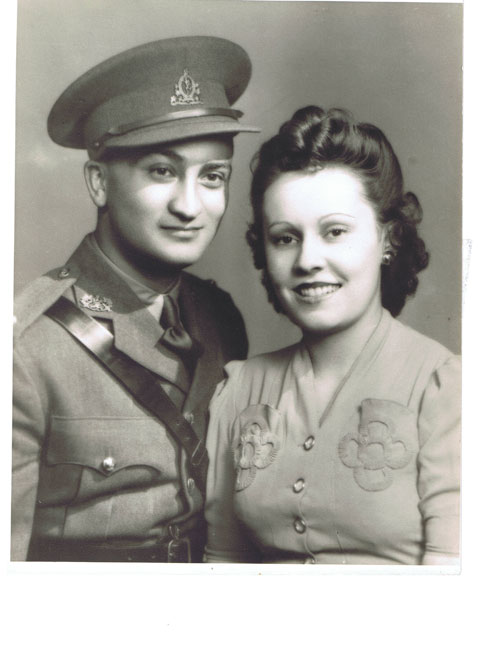 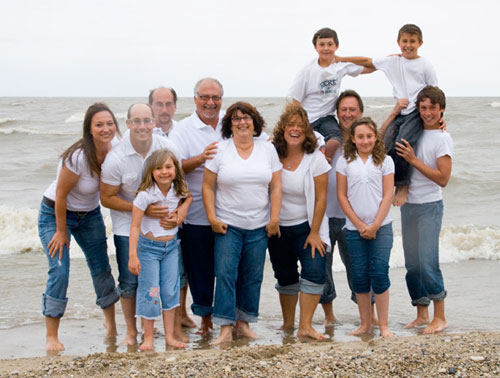 As early as I can remember, my mother would put me to sleep and say, "You're going to be a doctor." She was right, and was very influential in the rest of my life.

I was born in 1943 in Winnipeg to David and Elsie Boroditsky (née Lipkin). My mother was born in 1920 in Winnipeg to Jacob and Risa Lipkin who came from Russia. My father was born in Winnipeg in 1916, the son of Eliyokum Getzl and Anne, both originally from Russia. My grandfather and three brothers escaped the pogroms and made their way to the Gdansk Port in Poland, arriving too late to take the intended boat to South America. Instead, they took the next North America-bound ship. They were then lured by the promise of free land in Canada's west. By the 1930s, one brother moved to pre-state Israel while the others started Boroditsky Brothers' Bottling Company. My grandparents met and married in Winnipeg and originally lived in the traditional North End and finally moved to Glenwood Crescent. My Baba was a kind and gentle woman; my Zaida was an outspoken, traditionally religious, and community-minded man. He was active with the Hebrew Sick Benefit Association, Mount Carmel Clinic, the Propoisker Society, and the Labour Zionist movement.

I grew up with three brothers. Jack was born in 1946; Carey in 1953; and Danny in 1954. We lived on Anderson. Our home life was very Jewish and very beautiful, until my mother took ill when I was 10. She died at the age of 55 after years of seizures and poor health. I hated to see her suffer, and the desire to help relieve and prevent suffering shaped the choices I made throughout my career.

Before she took ill, she was caring and feisty, going after anyone who offended her family. I remember once she marched angrily into the Peretz School where on the previous day, my teacher tossed me through the window. She marched Jack and I right out of Peretz School and over to the Talmud Torah. I later went to Machray School and then St. John's High.

My father was one of the first graduates of the University of Manitoba's electrical engineering program. He enlisted in the Canadian Army in 1940 and served overseas in Holland as a lieutenant in the Signals Division. After the war, there weren't any jobs available in his field in Winnipeg, so he joined the family soft drink business, Bell Bottling.

My sense of Jewish identity was influenced by singing in choirs and by my summer camp activities. I sang in Cantor Jacob's choir as a soloist at the age of five. I joined Cantor Benjamin Brownstone's legendary choir, earning the nickname "Gerdie" (you knew you had made it in the Cantor's good books when he gave you a nickname). My dad was trained to be a chazzan by Cantor Jacob Koussevitzky and initially was an itinerant chazzan. Jack and I would go to sing with him in Calgary, Moose Jaw, Regina, and Saskatoon for the high holidays. My father became a full-time chazzan at the B'Nay Abraham and Beth Israel Synagogues. He passed away in 1992.

My life was immeasurably enriched by summers at Camp Massad. I developed friendships that still endure, and I sharpened my identity as a Jew, as a Zionist, and an activist. I learned about creativity, productivity, and community while working as a counsellor, assistant director, waterfront director, and medic.

In 1962, I met Diane Ross who had just come to Winnipeg from Saskatchewan. My colleagues and I who sang in my father's choir traditionally took our girlfriends to Slichot services and then out for coffee. That year my planned date was sick and I was introduced to Diane as a blind date.

We got married in Regina in 1965 with half of the staff of Camp Massad in attendance. We then returned to Winnipeg to start our family while I finished my medical studies and postgraduate studies in Obstetrics and Gynaecology at the University of Manitoba. Our first son, Alan, was born in 1966. Steven was born in 1969, and Michael was born in 1971. Our "boys' nights out" are a special memory for me, but more so for my wife. Today, Alan and his wife Lisa have three sons: Matthew, Jordan, and Noah. Michael and Elizabeth have two daughters: Emma and Madeline.

My career has been a source of excitement for me. I am a Professor and full-time faculty at the University of Manitoba and am the Medical Director of the Mature Women's Centre, and the Hysterectomy Alternatives Program at the Victoria General Hospital. Throughout my career I have tried to be a strong voice in controversial debates surrounding reproductive choices, sexuality education, minimally invasive surgery, and much more. I've been picketed and harassed, and was even a target of a bomb scare because of my advocacy. My passion in these areas kept me driven. As a physician, I changed my practice and activities every few years to satisfy my thirst for novelty and learning. I delivered thousands of babies as an obstetrician; performed numerous minimally invasive surgeries using new technologies as a gynaecologist; and led the charge in 1994 to open the Mature Women's Centre. Other than a six-month postgraduate term in the 1970s when I worked in Louisiana, I have proudly practised in Manitoba.

Today, Diane and I spend half of the year at our home in Gimli, with the rest split between Winnipeg and travelling. I have been blessed with a remarkable family and am proud to be part of an exceptional community.

In my career and my life, I have learned that you must have a vision and advocate for what you believe is right. I have difficulty with concrete thinkers; I prefer abstract thinkers — working with these individuals make things happen. I have enjoyed seeing the ripple effects of these endeavours.

I am happy to give back through the Jewish Foundation of Manitoba's Endowment Book of Life.