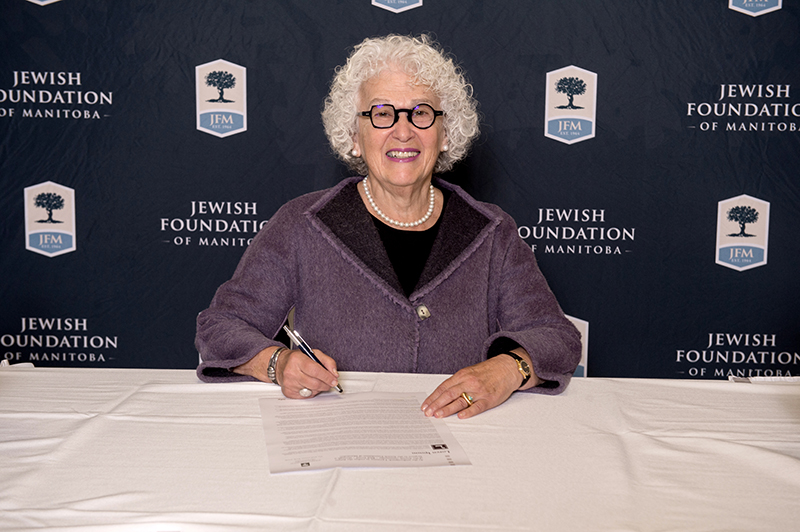 I was born in 1943 — the second daughter to Hyman and Kayla Shell. My father was the oldest son of David and Chana Shell who came to Winnipeg from Russia in the 1920s after much hardship along the way. His siblings were Bill (Ruth), Pauline Zinman (Sam), and Dr. Ben (Cal). My mother had the advantage of having been born in Winnipeg, to Elya and Shayndel Doner who came from Poland. She had two brothers, Sam and Saul (Lillian). My mother suffered the tragic loss of her father when she was only eight years old. As a result, my Baba lived with us and was a tremendous help to my parents in rearing five kids. My mother was quiet and reserved — a gentle, loving soul. My father was a furrier (Shell & Simovitch) who retired young and became involved in grain trading and investments. Our home was always full of people and great food, especially on Yom Tov. My parents bought a small cottage in Gimli in 1946, which, after several redesigns and rebuilds, is where we still love to spend our summers.

My older sister Carole Cohen (z"l) (Jerry), younger siblings Ella Diamond (Gary), Arnie Shell (Barbara), Malki Lapidus (Bob), and I kept our parents very busy. Between music lessons, Hebrew school, sports, the Y, and summers in Gimli, there was little time or resources for travel. I have always felt a special connection to my siblings, their spouses, and their children.

As a child, I remember going to the old Y by streetcar, being in a club (the Gems), going to school, loving math, hating history, having a Bat Mitzvah, being on the Honour Roll at Rosh Pina Hebrew School, being evacuated to Gimli during the 1950 flood, being a flower girl at my aunt and uncle's wedding, and spending summers in Gimli. My worst memory was when my Baba died when I was 10. She had been living with us and her death left a gaping hole in our lives.

It was assumed in our family that we would all go to university, which I dutifully did, achieving a BSc in Home Economics in 1964. To cover my tuition, I worked as a dictaphone typist in a law office every summer except one. That one summer I was a counsellor at a camp in Niles, Michigan, run by the Chicago Board of Jewish Education. It was there that I met my future husband, Mike Abrams.

After university, I went with a friend to Israel for a four-month adventure. We travelled by sea — a 16-day trans-Atlantic crossing on Zim lines out of New York. In Israel, we started out at Kibbutz Ramat Yochanan, then worked on an archeological dig at Masada before it opened, followed by two months in Jerusalem working at the Israel Museum typing English letters to North Americans prior to its opening in 1965. Shortly thereafter, I returned home and married Mike a few months later.

Mike's studies and career took us to Chicago (Northwestern), Toronto (U of T for a PhD in Psychology), Winnipeg (Psychology professor at U of M), Zanesville, Ohio (Psychology professor at Ohio University), and Dayton, Ohio (Systems Engineer at NCR). During those years, I worked as a secretary in Chicago (AC Nielsen), and as a Systems Analyst in Toronto (R.L. Crain Ltd). When we moved to Winnipeg, we started a family and I became a stay-at-home Mom.

Sadly, our first child, Adrienne (z"l), was born and died at three months of age in 1970. I still grieve that terrible loss, but that grief is tempered by the wonderful children and grandchildren who followed. Allyson (1972), is married to Amir Kats, is a bio-statistician, lives in Minneapolis, and has two sons, Matan (2014) and Yossi (2015). Aaron (1973), is married to Elaine Poon, and is a math professor at Washington & Lee University in Lexington, Virginia. Ilana (Lani) (1976), is married to Steven Hyman, is the office manager of the Jewish Heritage Centre in Winnipeg, and has a son Adam (2008) and a daughter Danielle (2011).

There is nothing more magical than holding the child of your child for the first time. Being the Baba to four amazing grandchildren is a great gift in my life and a reminder of how important family is.

In 1988 on a trip to Winnipeg to celebrate my parents' 50th anniversary, I made the decision to return to Winnipeg, much to the chagrin of my children. It was a rough transition — Aaron had graduated high school and had college on his mind. Allyson and Ilana were thrust into Jewish day school for the first time. And I didn't have a job. Ultimately we settled in and lived our lives. I worked at Nygard for a year and then as a software developer at a pioneer IVR company, Voisys, which eventually morphed into Telenium, Inc. from which I retired in 2013 after almost 25 years.

I have always enjoyed working with my hands. Over the years I have created objects in a variety of ways — sewing, knitting, crocheting, woodworking. But my greatest joy was working with clay — from earthenware to stoneware to my favourite medium, which is the beautiful and versatile porcelain. I am proud to say that my pieces are in many homes in Winnipeg and around the world.

Today I live a full and active life. I attend shul regularly — a pleasure I discovered while saying Kaddish for my father in 1993. I'm an avid golfer, I walk five miles a day, I used to run in 10k events, and I cycled in the MS150 eight times. In the community, I served on the Rosh Pina Board for ten years and on the Grants Committee of the Jewish Foundation's Women's Endowment Fund. I care about this community, which is why I am participating in the Endowment Book of Life.