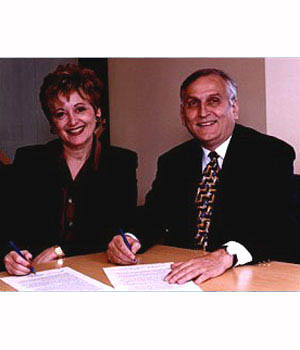 Through my participation in the Endowment Book of Life, I hope to ensure the future viability and growth of the Jewish community.

I was born in Winnipeg, the son of immigrants. My father and grandfather arrived from Turkey in 1927 and first farmed in Saskatchewan. My mother and her family emigrated from Russia. My parents, Joseph and Rose (Shnovsky) Kives had two sons, Harold and myself. I grew up in the North End and attended Peretz School, Edmund Partridge Junior High, West Kildonan Collegiate and the University of Manitoba. My fondest childhood memories centre around my grandfather and the support I received from him. Yiddish was my first language, and I enjoyed participating in Hashomer and the Y.M.H.A.

My parents always stressed the importance of education. Medicine was not to be my calling, so after one year I entered law school, and graduated in 1968. At the same time that I was a student, my cousins and I marketed kitchen gadgets and compilation records on television. This activity led to the humble beginnings of K-Tel International.

After my marriage to Barbara Rosenfield in 1969, I opened offices in the U.S.A. and in Europe where Barbara and I resided over a period of ten years. In 1971 we had our first child, Sari, while living in Minneapolis. In 1974 and 1976 we had Stephanie and then Reagan. In 1981 we had our son Michael while living in London, England. On my return from Europe, I left K-Tel to start my own marketing company, Quality Dino Music which I ran in North America and abroad until 1997. At present I am semi-retired and enjoying time with my family and friends until I find a new outlet for my energies.

I have always enjoyed participating in fundraising for the Jewish community and the community at large. The first Winnipeg Hebrew School lottery to raise funds for Jewish education was established by myself and my brother. In the past I have served as Chairman of C.J.A., Membership Chair of the Young Presidents' Organization, and Board Member of the Manitoba Opera Association. I presently sit on the Investment Committee of The Jewish Foundation of Manitoba.

I have always felt the importance of doing good deeds and sharing my good fortune. Barbara and I have hopefully instilled these traditional values in our four children and believe that they too will continue to actively participate and contribute.