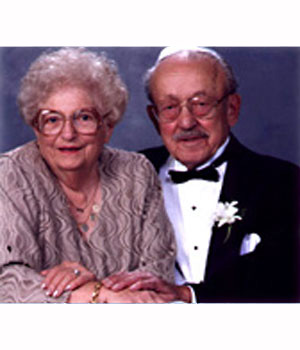 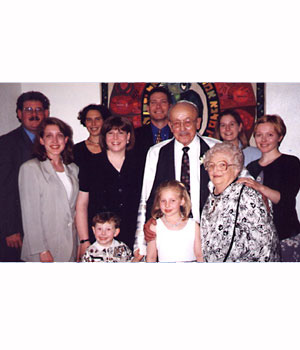 Clara Hamovich and her family

My parents, Maier David and Rachel (Anjou) Hamovich came to Winnipeg from Romania in 1912 with their five children, Sarah, Julius, Victor, Louis and Ray. They migrated twice - my mother's parents were still in Romania and were not well - so they returned to Romania, and came back to Canada again in 1914. The family settled in Winnipeg's North End where I was born two years later, in 1916.

I attended Argyle School, David Livingstone, and Aberdeen School. This was the height of the depression and I realized I would not be able to go on to University. I was advised to re-take my Grade 9 at Machray School where I took a Commercial Course rather than University Matriculation, and then went on to graduate from St. John's High.

During my high school years I became involved with Young Judea and was one of the youngest to be active on the Zionist Council, serving as President of the J.N.F. in Winnipeg. At age 29, I met with the late Rube Kimmel, who asked me to become the Executive Director of the Mid-West Region of the Zionist Organization of Canada. I assumed the position on February 15, 1945. This began a life-long career of community involvement. Among a variety of activities and projects initiated by the Z.O.C. - I inaugurated and organized the first twelve Negev Dinners in our community.

In 1967 I was appointed Regional Executive Director of the newly created Canadian Zionist Federation, and that year I also conducted a special Emergency Campaign during the Six Days War. It was the second most successful campaign per capita world-wide, which undoubtedly led to my being asked to serve as Campaign Director for the Combined Jewish Appeal in 1970. I held this position until 1982 and stayed on in a consultative capacity until my "total" retirement in 1992. During my years of community service, I visited Israel nine times - including several fundraising missions. In May, 1985, my wife and I were privileged to attend the dedication in Israel of "Ralph Hamovich Lounge" at Winnipeg House (a Senior Citizens Centre in Jaffa Dalet) - built with funds raised through the Combined Jewish Appeal.

I am also proud to have been a founding member and first President of the Brandeis Lodge - receiving an Honourary Life Membership in 1973.

I married Clara Freed, whom I met through Young Judea, in 1939. We have three children, Mira (Buchwald), in Winnipeg, Jerry and Keren (Freed) in Vancouver, also eight grandchildren, and two great-grandchildren.

Curling and golf have been a great joy in my life. I was pleased to be conferred with Honorary Life Memberships by the Maple Leaf Curling Club (having served as Secretary for 18 years), and by the Manitoba Curling Association. I particularly enjoyed the years when I organized the B'nai Brith Curling Bonspiels, which brought in curlers from far and wide. I have been golfing for about 50 years, having been a member at Pine Ridge, Bel Acres, and, since 1975, Glendale Golf & Country Club, where I served on the Board of Directors. (It was a special thrill for me when our son Jerry won the Manitoba Junior Golf Championship in 1963.) On June 7, 1999 I was pleased to be one of 20 people honored at the Annual Y Sports Dinner, in recognition of my participation and accomplishments in community sports.

I am concerned that Jews are becoming more self-absorbed - rather than caring first and foremost for each other. There are many ways of being Jewish, and I encourage our community to become more tolerant. I believe that our education system must continue, even be intensified, and encourage parents to aim for consistent values between home and school.