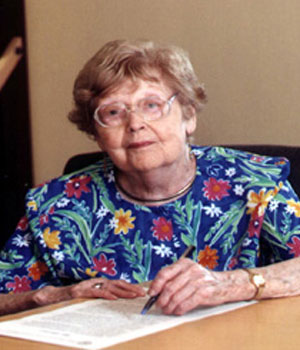 My parents, Michael Troyanker (Trojan) and Fanny Selikovsy were married in Oman, Kiev in the early 1900's. They had seven children - five daughters and two sons - and I was the fourth child in the family, born on Christmas Eve, December 24, 1916. One of my most vivid memories was of an incident that occurred when I was only six years old when the Cossacks came to our town on horseback to destroy the Jewish population. Our family went into hiding and this was one of the most traumatic experiences of my life. To this day I still experience reoccurring nightmares of the Cossacks attacking, beating and murdering many of our friends and neighbors.

We were fortunate to escape since the Russians liked my father, a gregarious, social being, and we managed to get to Besserabia and from there to Bucharest, Romania where I attended school for one year. We then departed across the ocean on the good ship "Atlantic" to the "Golden Medina" of the north, Canada. The journey took one long, arduous month, though I do remember one joyous event where the captain invited my sisters and myself to sing for the passengers in first class on Christmas Eve - ironically, the day of my birthday!

Our hope was to emigrate to Montreal, but this was denied by immigration officials and we wound up in Winnipeg. The Hebrew Immigrant Aid Association assigned us a two-room apartment and my father set up a photo studio at Salter and Selkirk. I attended William Whyte School until the end of the eighth grade but our dire economic plight required that I leave school and enter the work force. I joined my father in his studio where I did retouching and colouring of photos with oil paint.

I met my husband, Joe, when I was 14 years old and we married six years later on February 17, 1935. We have three wonderful accomplished children who all have exhibited a "psychological bent". David is a successful financial analyst on Wall Street who has written books on the psychology of the stock market. Solly is a professor of psychology in Israel and has written extensively about families in stress. Sherrill is a psychiatric social worker and also supervises students at the University of Manitoba. Her husband Dane is the head of the Department of Psychiatry at Victoria Hospital. We also have eight grandchildren and two great grandchildren residing in Winnipeg and Israel, and have much "nachas" from them all.

As for my personal interests and endeavours, I have always loved sports, including golf, ice-skating and tennis. My greatest love is music and since the 1940's I have sung for many groups - at such places as the Sharon Home and the Gwen Secter Creative Living Center, and have been a member of both the Shaarey Zedek Synagogue Choir and the Stay Young Choir. Following this tradition, my daughter Sherrill also complements her busy professional and family life by singing in the Manitoba Opera Company and various other musical productions.

Music is a way of bringing both joy and hope to other people and myself - indeed it is a spiritual uplifting to both the participants and listeners. Even though I am a senior citizen and my voice has seen better days, I still persevere and to this day take music lessons and participate in a variety of music concerts and festivals. I have found singing to be a metaphor for living - if you persevere and do your best in what you love, you give joy and hope to others and also find hope and meaning in your own life. Through the "Sound of Music" I have both found and hopefully contributed to the "Joy of Living" of others.