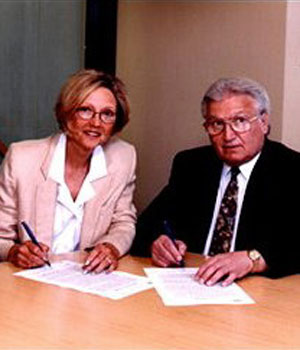 I was born in Shelbourne, Nova Scotia, but my three brothers and I grew up and were educated in Transcona. I was raised in the United Church, but as a teenager began to question its teachings and embarked on a spiritual search which eventually led me to embrace Judaism. I am, therefore, a Jew by choice. My parents, Beverly and John Wright (both born in Canada), allowed me to live according to my choice. I consider myself fortunate both in having such parents and in the choice that I made.

Gary Margolis was a frequent customer at the drugstore where I worked during my high school years. We were married in 1971, and shortly thereafter, we moved to Hillhouse Road, where my neighbours and friends helped me to make the adjustment to life in the Jewish Community. When our two children, Tara and Jonathan, became part of the Jewish school system, my involvement consolidated and enhanced my Jewishness as did my role as a Bar/Bat Mitzvah mom.

My involvement in the school system centred around the PTA of the two north end schools, serving on the Boards of both, and including time as President of the Talmud/Torah Joseph Wolinsky Collegiate PTA . I have many fond memories of fund raising activities for the PTA (particularly hot lunches and casinos), and of long and involved Board meetings. I was pleased to receive the Max Nathanson Young Leadership Award in 1986. My volunteer activities later extended beyond the schools and include serving on the Board of the WJCC, Rosh Pina and Chesed Shel Ames, and participating in Meals on Wheels.

In reflecting about my life thus far, I realize that it has been a great joy to be an active community participant. We were privileged to have our children in the Jewish schools which provided them with a strong affiliation and gave them the background necessary to make educated choices about how to live their lives.

Despite my admiration and hope for our community, I do have a concern about its future: our children have so many opportunities for travel and work - what will keep them in Winnipeg?