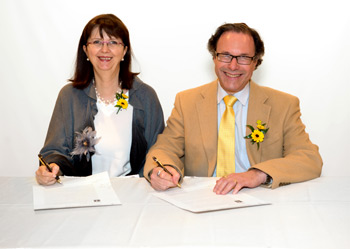 Chaya was born Kathryn Rose Shirtcliff on November 13, 1949, in Coos Bay, Oregon. Alan was born in Los Angeles, California, on September 14, 1953. A complex set of circumstances led to their marriage in Los Angeles on October 21, 1990. Here, briefly, is their story.

Chaya (who then went by the name Katy) met her first husband, Robert Rabinoff, in Tucson, Arizona, and married him after converting to Judaism in 1973 in New York City. Both Katy and Robert had previously learned the Transcendental Meditation technique—a turning point in both their lives—and both became teachers of TM in 1972 and 1974, respectively.

In the meantime, Alan was growing up in Los Angeles. He also learned the TM technique—also a turning point in his life—and went on to become a teacher of TM in 1973. Shortly after returning from TM teacher training, Alan picked up his first book on Jewish mysticism—titled “9 ½ Mystics: The Kabbala Today,” by Herbert Weiner.

Reading it proved to be a life-changing experience for Alan, because much of what he had learned and experienced at TM teacher training was precisely articulated—in Jewish terms—in that book. In the wake of this experience, the thought of becoming a rabbi first entered Alan’s mind.

Meanwhile, in 1975, Katy and Robert moved to Fairfield, Iowa—a small town in the southeast corner of that state—because it had become home to Maharishi International University (now called Maharishi University of Management). Robert, who had just earned his PhD in atmospheric physics, became first a professor of physics, then chair of the Physics Department at MIU, and went on to serve as Dean of Faculty. Katy worked in the Office of the President.

While this was going on, Alan graduated with a degree in Religion from UCLA in 1976. A year spent abroad at the Hebrew University in Jerusalem had set him on the rabbinic path, and he entered rabbinical school at the University of Judaism (now called American Jewish University) in Los Angeles in 1978.

However, once there, Alan found the school not to be to his liking. When Dr. David Lieber, President of the University, taught that “the mystical level of interpretation of scripture has no relationship to the meaning of underlying text,” Alan realized that it was time to move on. A year later, Alan entered the Master of Business Administration program at Maharishi International University.

In the meantime, Katy had given birth to Joseph in February of 1981. Because of their shared interest in Judaism, Katy’s husband Robert became friends with Alan. Visiting Robert’s home on one occasion, Alan caught sight of Katy for the first time. She was, in his words, “the most beautiful woman (he) had ever seen.” Of course, at that time, Katy and Alan had no notion of what the future would hold in store for them.

Alan continued on with his MBA program at MIU, and even did field work in the Philippines in 1984. Back in Iowa, Katy gave birth to triplets Daniel, Eve, and Shoshanah in April of that year. However, as Alan’s field work wound down, he received word that his mother in Los Angeles had fallen ill, and that he was needed at home.

Over the next five years, Alan helped care for his mother, while earning a Master’s Degree in Religion from UCLA. In the meantime, he heard of an opening in a small synagogue in East Los Angeles. While not yet an ordained rabbi, Alan decided to try out for the position, and was hired as spiritual leader of Temple B’nai Emet of Montebello in 1987. He served in that capacity while working toward S’micha, until he received a private ordination from Rabbi Zalman Schachter-Shalomi, Founder and Dean of the Aleph Alliance for Jewish Renewal, in 1991.

It was a lonely and desperate period in Alan’s life. During that time, his routine mainly consisted of caring for his congregants, caring for his mother, and commuting on the L.A. freeway. But God answered the inarticulate cry of Alan’s heart in the form of another fortunate meeting with Katy, whose marriage had ended in 1989.

In May of 1990, members of the synagogue in Fairfield (of which Robert and Katy had been founding members), invited Alan to officiate at a Bar Mitzvah and a wedding, as the community didn’t have a rabbi. As he was bidding farewell to Katy that Friday evening, Alan gave voice to what he had felt when he first laid eyes upon her all those years before.

Two months later, Katy and Alan were engaged to be married. One month after that, with four children in tow, Katy bravely moved to Los Angeles. They married in October 1990, and Katy began the arduous task of transforming Alan from an aging bachelor into a husband and father.

It remains a work in progress! Alan owes Chaya (who legally changed her name in 2007) an infinitely great debt of gratitude for the decades of love, compassion, patience, faith, and clarity she has invested into their relationship that it might grow and flourish.

After receiving Reb Zalman’s ordination in 1991, Alan and Katy moved to Winnipeg, answering a call to serve as Rabbi of Beth Israel Synagogue (now merged into Congregation Etz Chayim). After eight years with Beth Israel, in 2000, Alan was called to the pulpit of Congregation Shaarey Zedek.

Alan has continued to serve as Senior Rabbi of Shaarey Zedek as of this date (June 2013) with joy and gratitude for the great good fortune God has bestowed upon him, upon Chaya, and upon their children: Joseph and Kirsten; Eve and Eric; Daniel and Elena; and Shoshanah and Erik and their son Nathaniel.

May God continue to bless all of us with long life, good health, great happiness, and much fulfillment. Amen!