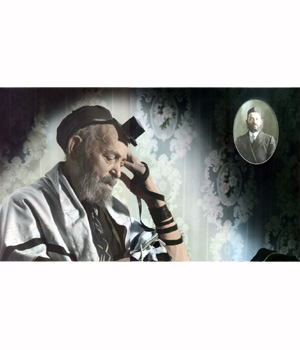 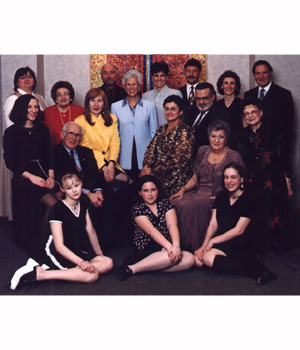 The extended Wilder Family, April 1999 at our 50th Wedding Anniversary

Our family roots began in Russia and Poland. My father, Alex Cantor emigrated with his parents Rabbi David and Hoodel Cantor and his two sisters and three brothers in 1904. My grandfather was the first mohel and ritual slaughterer in Winnipeg. My mother, Anne Secter, arrived here six years later with her parents. Both families settled in the north end of Winnipeg, which was home to so many of the immigrants of that era. Both of my parents attended public schools and graduated from St. John's High School.

Following high school, my father received his B.A. degree at Harvard, returning to Winnipeg to study law. He was admitted to the bar in 1920 and became an active member of both the Jewish and the general community. He served with distinction in many areas including B'nai Brith and Fresh Air camps, and was a founding member of the Jewish Foundation of Manitoba. He also had the distinction of being the first Jewish chairman of the Community Chest, which is now the United Way. My mother was also involved in the community, in particular with the Family Planning Council of Winnipeg, where she was vice-president for a number of years, and also participated actively in her Hadassah chapter.

Our family was always strongly affiliated with the synagogue. Initially we were members of Tiferes Israel Synagogue until I was about twelve years old. We then became members of Shaarey Zedek Synagogue, where my father later served as president. I attended Sunday School classes there, and following my confirmation took on the role of teacher at the pre-school level.

I was also educated in the public school system and like my parents, graduated from St. John's High School, after which I earned my B.A. at the University of Manitoba followed by a course in Pre-School Education. I taught pre-school for several years both at Shaarey Zedek and Rosh Pina Synagogues and later also taught a Creative Cooking class in the Adult Education Program of the Winnipeg School Board. My career path then took me to The Paper Gallery where I have been employed for the past twenty-four years.

In 1949 I married Marshall Wilder and we recently celebrated our Fiftieth Anniversary. We have two children: our daughter Leslie who was born in 1952 and our son David who was born in 1954. Leslie is a Program Leader at Red River Community College and a very active volunteer in the Jewish community. David is married to Diane Schacter and they have two daughters, Shira and Tovah. I am delighted that both girls attend the Gray Academy of Jewish Education. Our children need a place to learn about their culture, traditions and faith. One of the reasons that I support the Foundation is to help ensure that funds are available for the Jewish schools and for the Campus, for it is through these organizations that my granddaughters can find a sense of community, continuity and belonging.

Like my parents and grandparents, I too have always been active in the Jewish community. I was a member of National Council of Jewish Women, am a life member of Hadassah and served as president of Israeli chapter. I also served a term as president of the Shaarey Zedek Synagogue Sisterhood and sat on its Youth Commission. As I have been inspired by parents and grandparents, my hope is to pass on to my children and grandchildren the same vision of community and strength so that our community will continue to grow successfully.