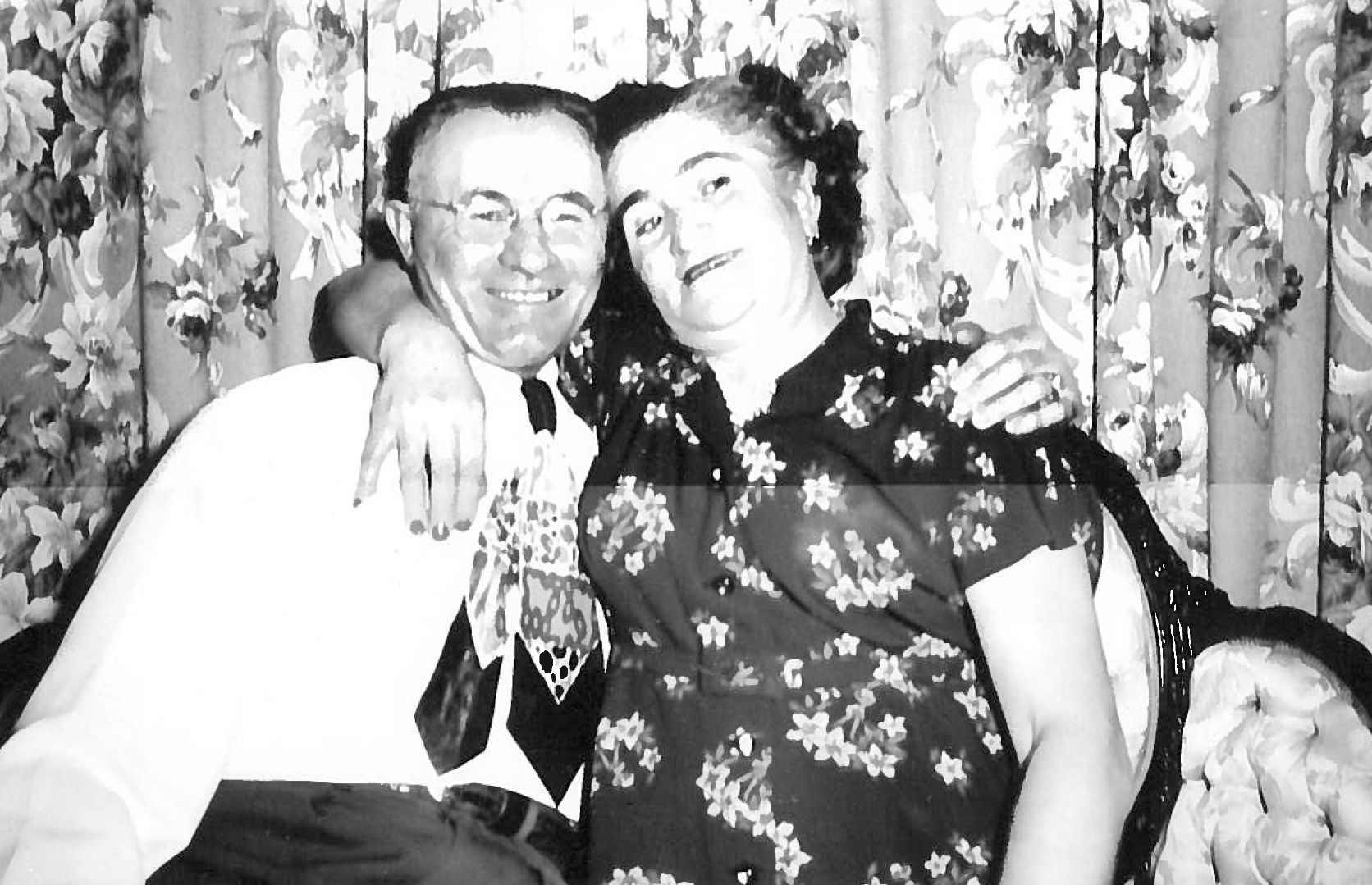 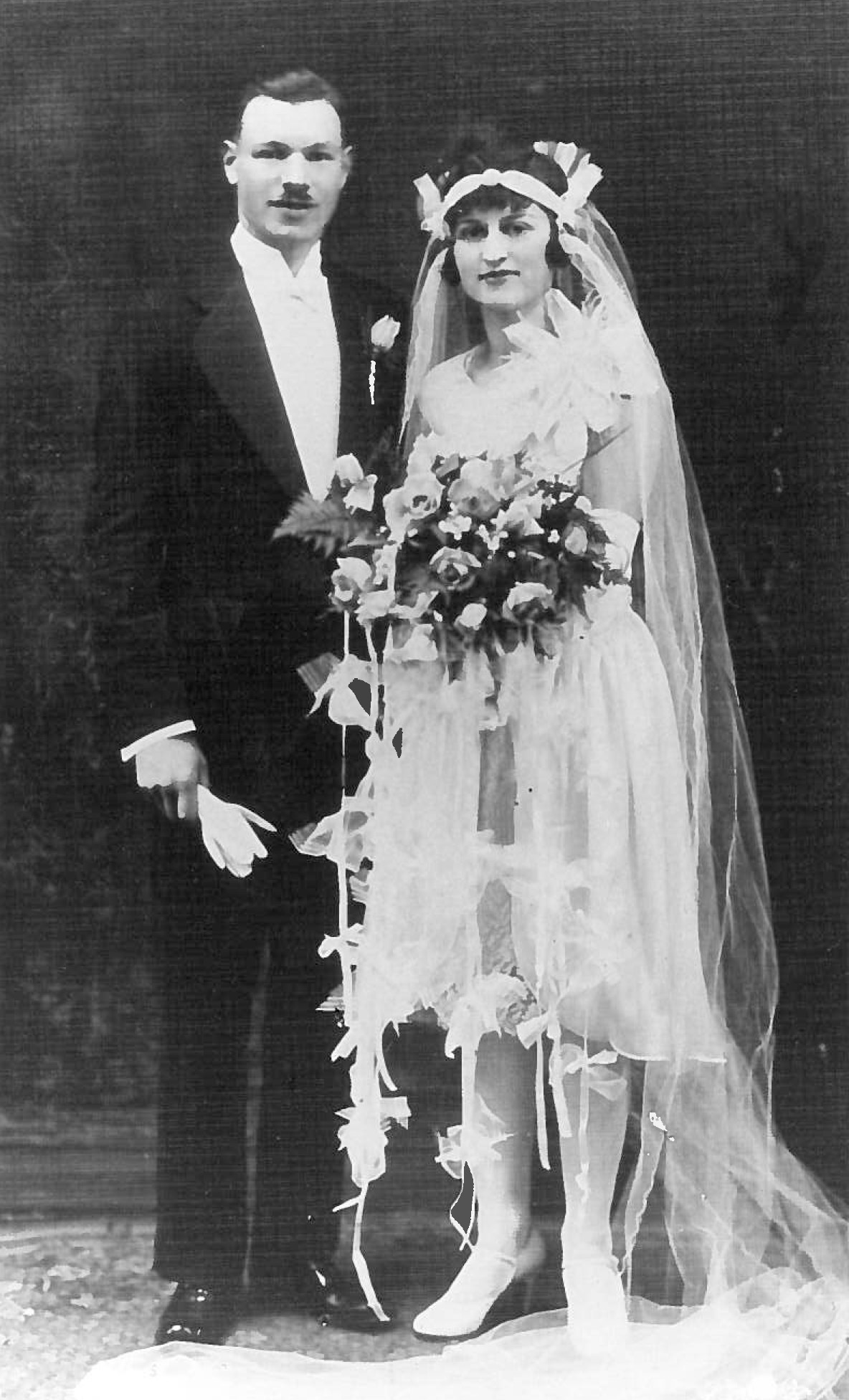 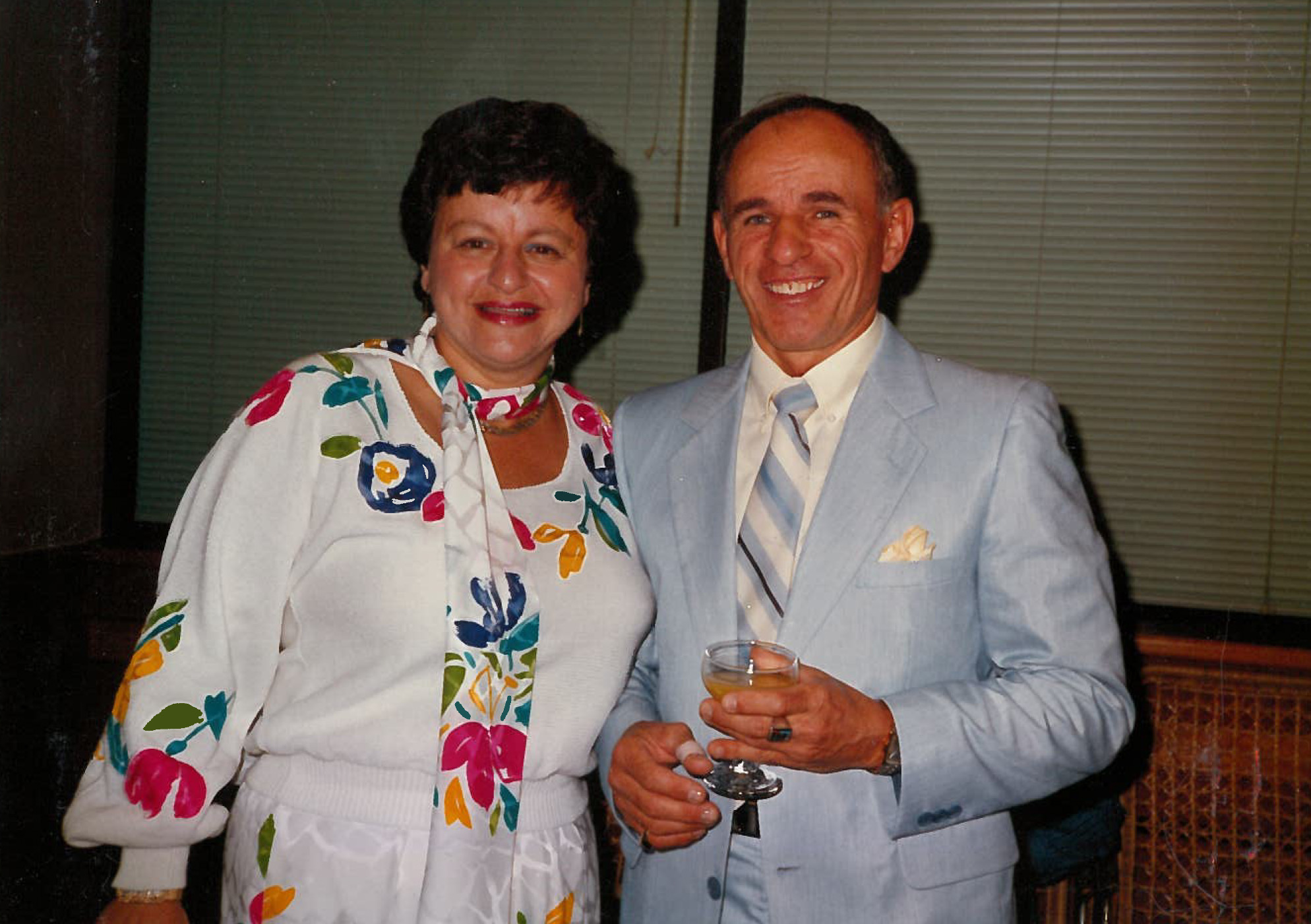 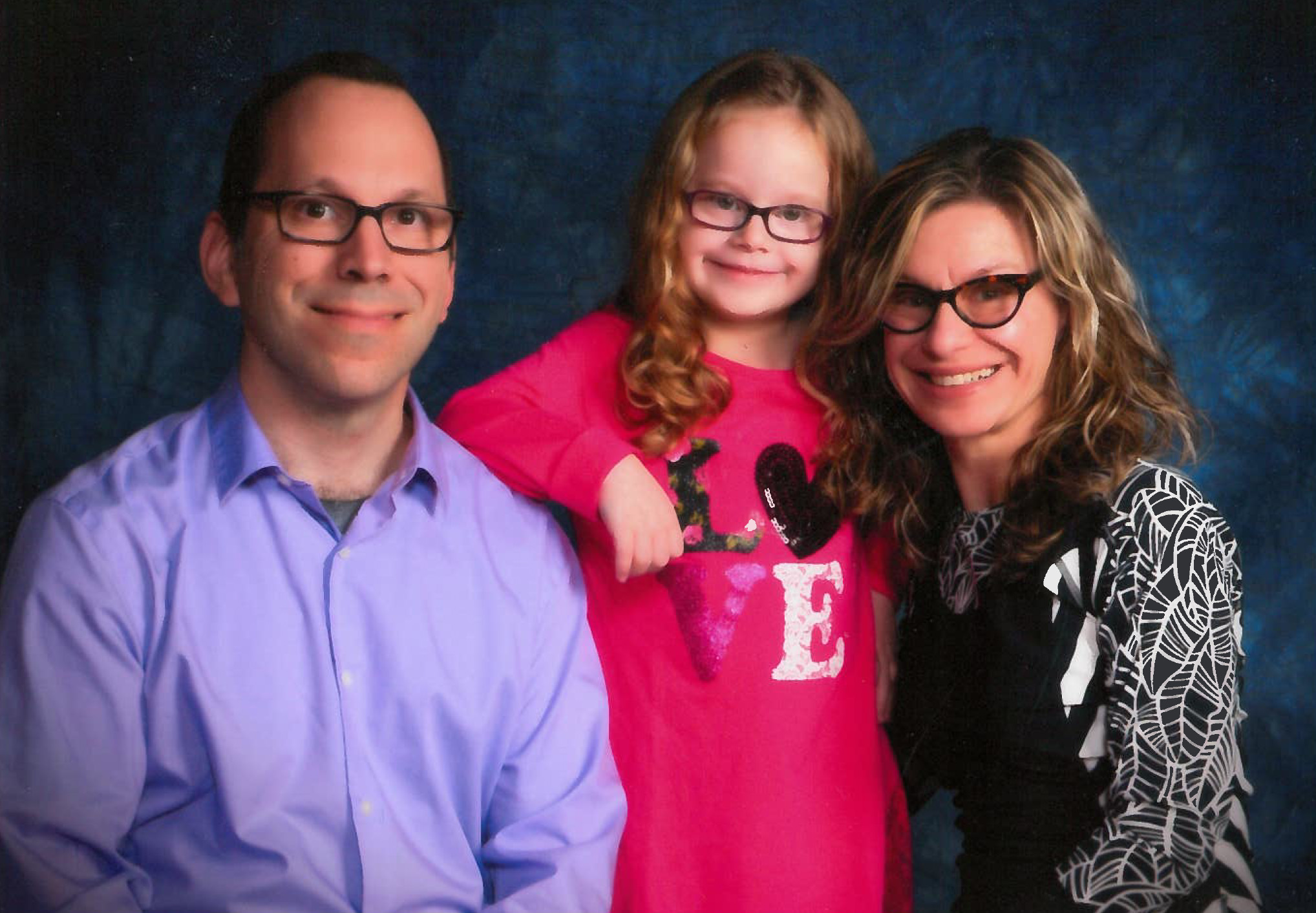 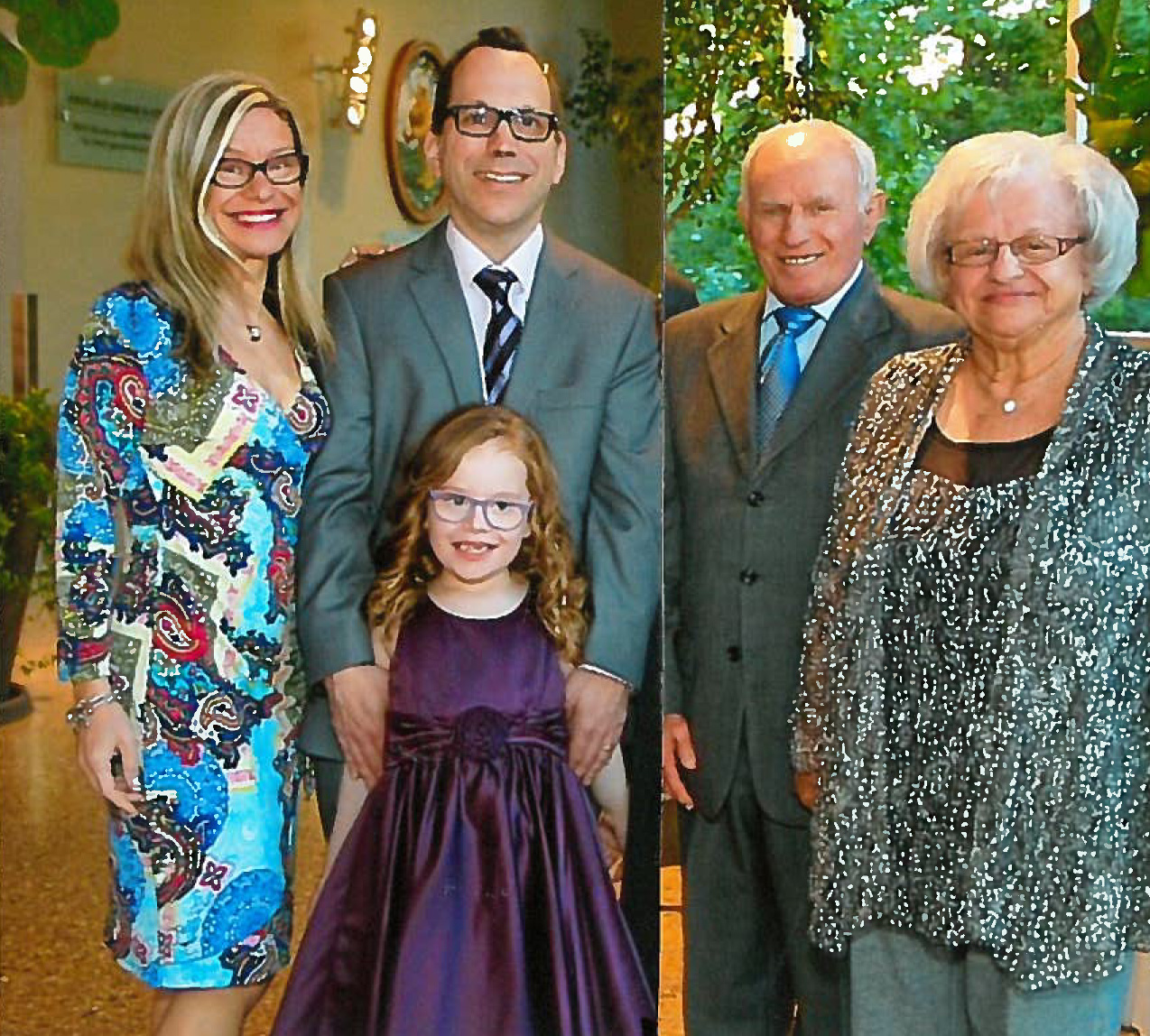 The Zimmermans and the Hochmans

"BabaZaida". One word. A name that describes two people whose stories have been intertwined for over half a century. Their granddaughter sees that connection and cannot imagine one without the other.

Phyllis and Benny Hochman were married by Rabbi Rappaport at the Rosh Pina Synagogue on October 11, 1970. Their first date had been eleven years prior - to see the movie entitled, ironically, "It Started with a Kiss" ... but let's rewind the clock and go back a few years...

Abraham Hochman, Benny's father, was born on October 10, 1899 to Shami and Soora Hochman. Rose (Zusman) Hochman, Benny's mother, was born on January 1, 1899. Both were from Wyszubja-Luck, Poland. In 1929 Abraham made the painful decision to leave his wife and children behind and sail to Canada to attempt a better life for his family. He worked first as a farmer in Hoffer, Saskatchewan and then came to Winnipeg and became a fruit and vegetable peddler. Two years later, he sent for his family - Rose and four daughters: Florence, Betty, Sarah and Dora. One son had passed away of measles. Once here they added daughter Clara, son Gordon and on July 11, 1936, the hottest Winnipeg day ever recorded (108° F), twins Sammy and Benny. They raised their family on Robinson Street.

Benny attended Aberdeen and Champlain Elementary, Machray Junior High and St. John's High School. Peretz Shul and the Talmud Torah provided his Jewish education. Throughout his schooling he was very involved in sports - baseball, basketball, hockey, volleyball, and - his favorite - soccer. Among his many achievements he cites two as particularly special: when he completed Machray Junior High he received the letter crest "M" for outstanding athlete, and when his soccer team at St. John's took the city title against Daniel Mac, the newspaper article read, "Ben Hochman was a pillar of strength at centre-half." He enjoyed it all and managed to juggle sports with his job at his father's store.

Abraham Hochman opened Hochman's Food Store at 906 Main Street in 1936, the same year his twin sons were born. They began working there at the age of 12. The store initially featured fruit and vegetables but as time went on it expanded to include the neighboring delicatessen and was named the Oasis Delicatessen in 1955. Abraham spoke seven languages which drew in customers from many backgrounds. Benny admired his father greatly and loved working alongside him. The Oasis was a thriving, demanding, 7-days-a-week business and it provided a wonderful life and livelihood for Benny until it was sold to new owners in 1984.

The store and sports kept Benny busy enough, but he also developed another passion - ballroom dance. He diligently learned a variety of ballroom and Latin American dances and this eventually led to years of his instructing others.

At the Y.M.H.A. on Hargrave Street Benny met Phyllis Zelickson. After that first date he continued to date Phyllis periodically but his work and other interests kept him busy. But by now he was 33 and the time had come.

Phyllis was born in Winnipeg on December 31, 1940, to Esther (Manishen) and Sam "Walter" Zelickson. Esther, born in Winnipeg in 1907, was the daughter of Pearl (Byck) and Jacob Manishen who had recently emigrated from Poland. Along with working hard to establish security for their family, Jacob worked actively with the Hebrew Sick Benefit to help newly arrived immigrants and Pearl was a founding member and very active for many years in the Winnipeg Chapter of Hadassah-WIZO.

Phyllis was raised on Burrows Avenue in Winnipeg's north end and has many fond memories of her childhood days and the lifelong friendships she formed there. Her father worked as a manager at Peerless Laundry and her mother worked as a sewer in the fur industry. Her mother was a warm, generous person who found special joy in caring for those who were in need. Phyllis attended Peretz Shul for her Jewish education and William Whyte School, St. John's High School and the University of Manitoba. She had one sister, Sylvia, who was twelve years her senior and who helped raise her and was always very good to her. After university Phyllis worked for the Leon A. Brown Insurance Agency and was an active member of the National Council of Jewish Women, enjoying its many activities and events. She was pleased to receive a service award for her volunteerism with that organization.

On September 9, 1973, Phyllis and Benny's lives were changed when their daughter Paula Joy was born. She has lived up to her name and given them much joy as they watched her grow up into the accomplished woman she is today. Paula is a graduate of Joseph Wolinsky Collegiate and the University of Winnipeg and has been teaching in the Hebrew Bilingual program at Brock-Corydon School since 1997. She is a dedicated, passionate teacher who loves her students and is loved by them. On October 14, 2007, Paula married Warren Zimmerman, son of Ron and Audrey Zimmerman. Warren is a psychological associate.

On July 28, 2009, Paula and Warren were blessed with daughter Abby Rueth. Abby is the light in her grandparents' eyes. Much of Phyllis and Benny's lives today consist of the necessary and the good: time with friends, errands, medical appointments, and sports for Benny - lawn bowling in summer and curling in winter. But some of their life consists of the great: the opportunity to participate in their granddaughter's life. Attending her sports activities, dance recitals, and school programs, going on outings or trips (an annual trip to Disneyworld is a highlight), or just being together as family; these are what makes life so special.

Participating in the Endowment Book of Life is Phyllis and Benny's way of saying "we have a granddaughter in this community; it is important to us that the community remains active and viable long into the future; that it is respected by others and respectful of others; and may it go from strength to strength."

She is their Abby. They are her "BabaZaida".