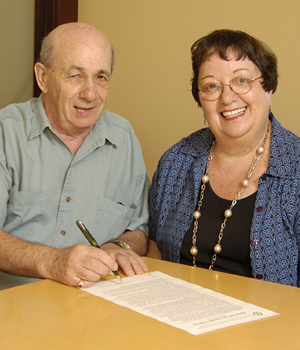 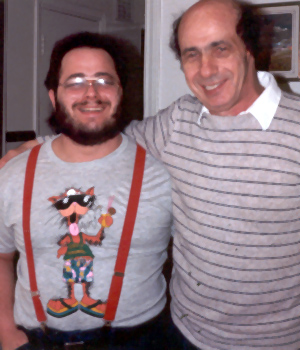 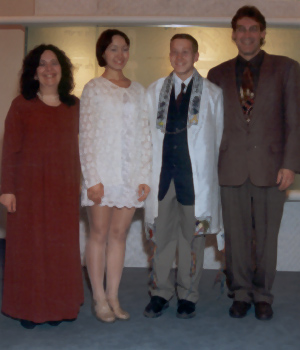 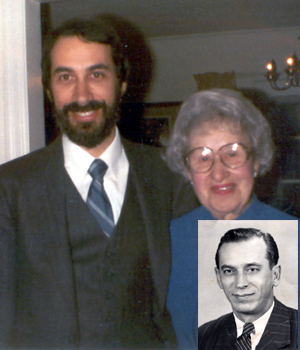 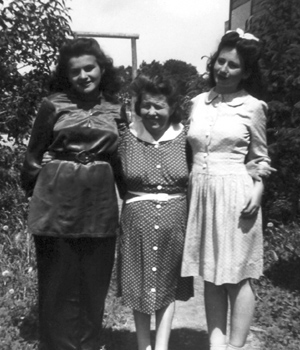 In many ways Phyllis and Nate Dana are opposites, but as they approach their 50th wedding anniversary

they have demonstrated that the attraction of opposites can indeed be a lasting one.

Phyllis is very much a public person, recognizable in the community for her nearly 30 years of teaching in the Jewish day school system, as a vocal soloist and synagogue choir member, and as an active member of several community organizations. Nate has been more of a private, behind-the-scenes kind of guy, the type of person who will do anything for anybody, but do it quietly. He is well known and highly respected for his contributions.

Phyllis' grandparents, Nate and Dora Lifshitz, were strong Zionists. The family intended to move to Palestine, but en route they changed their plans. Maurice, the oldest child had completed high school, so he enrolled in the National Agricultural College in Pennsylvania. His two younger brothers did make Aliyah. Maurice married his American sweetheart, Ida Cohen (Billie), and they talked about following his brothers, but when the Depression hit, the couple traveled to Winnipeg instead. Maurice began working in the garment industry, where he remained throughout his life.

Phyllis was born and raised in the city's north end. She attended the Folk and I.L. Peretz day schools and Shaarey Zedek religious school, Luxton, St. John's and one year at the University of Manitoba. She completed her education later at both Winnipeg universities while teaching in the Jewish day school system.

Phyllis was born into the tradition of community service. Her grandparents were active fundraisers for Zionist causes, Billie and Maurice (Lippy) gave a great deal of their time and energy to organizations and activities within the Jewish and general communities. These examples molded Phyllis as she matured, and she has continued the family legacy.

While the Lifshitz/Lipson family dreamed of making Aliyah, Nate's father Joseph, who was born in Palestine, immigrated to Canada in 1908, a graduate of Mikveh Yisrael Agriculture School. He farmed and worked as a lumberjack before going into the general store business. He married Ann (Galsky) and together they had seven children, only three of whom grew to adulthood. Nate was born in Paswegin, Saskatchewan, where his parents ran a general store. They moved to Fisher Branch, Manitoba, and came to Winnipeg in 1942, when much of the town burned down.

Eleven-year-old Nate was mistakenly sent to William Whyte, an all-girls' school, but quickly transferred to Machray. There he learned to stand up for himself in defence against the school bullies. Shortly after his mother's death, Nate began high school, which he never completed.

At the time that Nate and Phyllis met, she was contemplating studying at the Curtis School of Music in Philadelphia to become a concert singer. Unknown to Phyllis until many years later, Nate had been thinking of returning to school with the aim of becoming a social worker, a natural career for this caring individual. Instead of pursuing further studies, they fell in love and married when Phyllis was 18 and Nate was 22. A year later they were parents to Karen, who became a social worker. Son Marshall came along three years later. Both children attended Jewish day school until grade nine.

Nate began working in the garment industry in 1947, earning $13 a week. He was forced into early retirement in 1993, and soon began his career as a community volunteer. He has worked primarily with Jewish Child and Family Service, Gwen Secter Creative Living Centre, and Meals on Wheels. Phyllis is also retired now and shares her husband's conviction that volunteering enhances the volunteer's life even more than it does the agency or individual being served.

Daughter Karen is married to Harry Havey and together they have two children, Jessica (21) and Joshua (18), who are the joy of their grandparents' lives. Harry is a teacher, artist and musician, and he and Karen often perform as a duo. Their daughter Jessica is the lead singer with the folk group, The Duhks, and her career is flourishing. Joshua graduated magna cum laude from Kelvin, and has accepted academic and athletic scholarships from Simon Fraser University to study and play football. Son Marshall Dana lives in Winnipeg, sings for Jewish holidays at the Sharon Home, and is involved in volunteer activities of his own.

Having their children and grandchildren living in the same city has been a tremendous plus for the Danas. Their home has, for many years, been a gathering place for extended family celebrations and holiday feasts.

Both Phyllis and Nate hope that future generations will support and perpetuate the wonderful agencies and institutions which have made our Jewish community so enriching for those who have lived here. They urge others to give back to the community, both in terms of financial support and of themselves. The rewards are beyond measure.