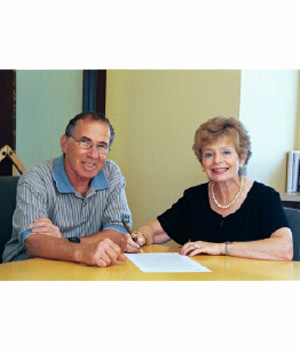 Phyllis and Manley sign their Endowment Book of Life story

Phyllis and Manley's story has a familiar ring. Their grandparents were immigrants from Russia/Poland, arriving in Canada early in the 20th century and making their living as farmers and peddlars.

Bella and Herschel Chochinov and Paul and Mary Lichter, Phyllis's grandparents, settled in Manitoba in the early 1900's. The men had come earlier, leaving their wives with the children to fend for themselves until passage to Canada was possible. Ida Chochinov was 10 and Ben Lichter 15 when they arrived in Canada. When they married on September 2, 1939, their home in north end Winnipeg followed the tradition of their parents — strong in the faith of Judaism, participation in the synagogue, and involvement in the community. Ben was one of the founders of the Hebrew Sick Benefit Society, Ida kept busy as a community volunteer and upholding her family — parents and four siblings and a large extended family. B & G Menswear on Main Street supported them and their only child Phyllis.

Sara and Moishe Goldenberg, Manley's paternal grandparents, followed a similar route while his maternal grandparents, the Pentelovitch family, settled in St. Paul Minnesota after a brief stay in Morden Manitoba. Manley's parents Bill and Ann Goldberg married in 1924 and Bill worked hard to become the first and youngest Jewish bank manager in Canada, managing the Bank of Commerce at McGregor and Selkirk. In 1935 he left the banking business and worked in the insurance field, eventually building the business that later became Apex Agencies. But his career paled in comparison to his volunteer work, he was known as "Mr. B'nai Brith" and was honored many times by that organization. He was one of the founders of The Jewish Foundation of Manitoba and was an extraordinary man involved in many facets of community life. He was the Jewish National Fund's Negev Dinner honouree in 1973.

Manley was born in 1935 and chose a career in law, graduating from the University of Manitoba in 1960. Together with a busy law practice, he followed his father's lead by taking an active interest in community affairs. He served as vice president of the Winnipeg Jewish Community Council and as president of Canadian Technion Society. He twice served as chair of the Youth Aliyah Dinner, a position that his father held before him and his son Bobby after him. He has been an active fundraiser for many community organizations. In 1974 his involvement in the community was rewarded when he became the first winner of the Harry Silverberg Young Leadership Development Award.

Phyllis and Manley married on July 19, 1959. Phyllis put her teaching career aside to raise their family — four sons, Bobby, David, Howie and Michael. All four boys finished Grade 6 at Ramah Hebrew School, and Phyllis was active with the school and the PTA. She also participated in Hadassah-Wizo, National Council of Jewish Women and Canadian Friends of Technion University. Over the years, they have opened their home to many community functions.

Phyllis and Manley speak with great pride of their sons, all of whom won various academic achievements throughout their schooling. They were pleased to be able to send each son to Israel at the age of 16 to be part of a Kibbutz and to develop a love for the land of Israel. Today, Bobby (born 1961) is a dentist in Winnipeg, married to Beth-Caren Ritter who this year is co-chair of the CJA Women's Division. Bobby and Beth's three children are Zachary, Jessica and Stephanie who all attend school at the Gray Academy of Jewish Education. David (born 1963) is a doctor in Kelowna, married to Lauri Hahn. They have a son Robert and a daughter Aidan, who is named after her two great-grandmothers Ann and Ida. Michael (born 1969) is a tax lawyer in Toronto.

Howie, born in 1966, was a lawyer in Toronto when he passed away in 1993. To honor his memory and as a tribute to his love for education, the family established the Howie Goldberg Scholarship Fund, which now makes possible scholarships at the Gray Academy, Technion University, University of Winnipeg and University of Manitoba.

Phyllis and Manley now enjoy retirement living... friends, community life, golf and travel. "We have travelled all over the world," they say, "but Winnipeg is our home. This Jewish community is unequalled in other cities, and particularly with the development of the Asper Jewish Community Campus, there is no reason for people to go elsewhere. We appreciate the tremendous opportunities for a superb family life and the richness of friendships and community life are unparalleled."