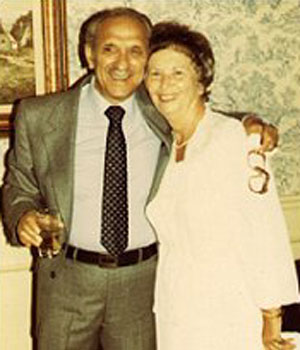 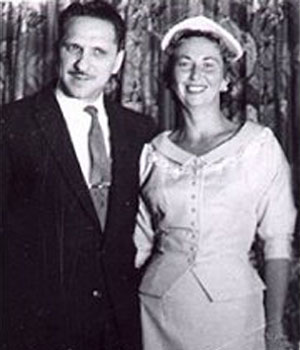 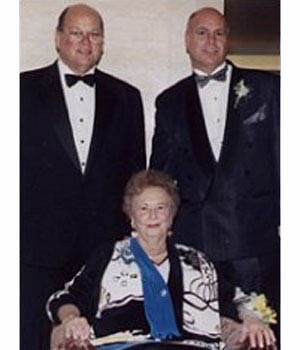 Phoebe with her sons, David and Bruce

I was born, grew up, and was educated in Newark, New Jersey. My parents, Mollie and Barnett Efseroff, settled there in 1906 when they came by ship from Russia and established themselves in the hotel business. My two brothers, three sisters and I had a traditional Jewish upbringing, and I have vivid and warm memories of the celebration of Jewish holidays and the wonderful dinners that were part of them. I participated in activities at the YMHA, a centre for Jewish young people's activities.

I was a widow at a very young age, with two sons David, 13 and Bruce, 6. I moved to Florida from New Jersey to live near my sisters and brothers who were living there at that time.

I met Ralph Mozersky in Florida, we fell in love and married on May 29, 1956, and I subsequently moved to Winnipeg. Although I had previously worked as a book-keeper, I dedicated myself to being a devoted wife and mother. My son, David, is a vascular surgeon who lives in Texas. He is married to Patricia Serebrin who grew up in Winnipeg, and they have two sons, Joel and Jason. My second son, Bruce, is a teacher, living in Toronto. His wife, Fern Zand is from Toronto, and they have a son, Shawn and a daughter, Erin.

Ralph's parents, Harry and Annie Mozersky, both came to America from Kiev, Russia. They met in New York and fell in love and married. They came to Winnipeg in 1912 with two children, Raye (Collerman) and Myer and subsequently had four more - Isadore Ralph, Shoshana (Koster), Solomon, and Evelyn (Moglove). They started a second hand furniture business on the corner of Ellice and Carlton Streets. Eventually the three sons took over the business known as Manitoba Furniture Company at the same address. Ralph was a graduate Pharmacist before entering the business with his brothers.

I have had a very rich and rewarding life because the Mozersky family welcomed me and my sons as did many other Winnipegers who have become my friends. I have enjoyed my involvement with Hadassah Wizo and Pioneer Women.

My hope for the future is that young people continue to live in Winnipeg to assure the continuity of the Jewish community. Winnipeg is a wonderful place to bring up a Jewish family, and I am pleased to be a participant in the Foundation's Endowment Book of Life which will help to make the community and institutions strong and vibrant.