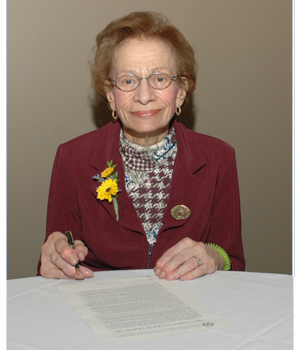 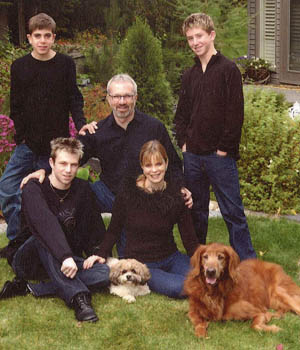 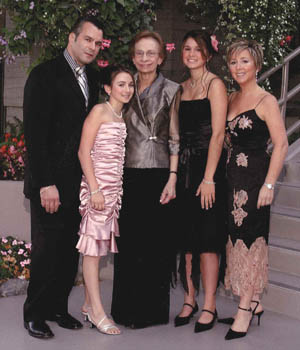 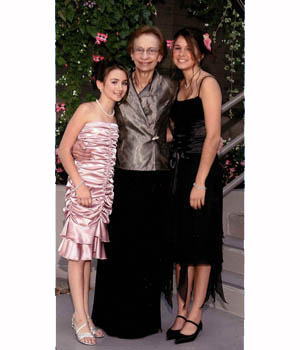 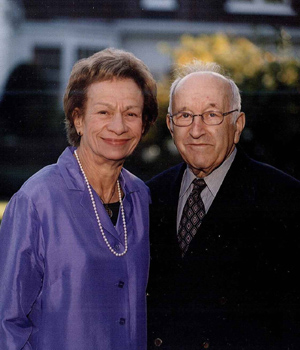 Pauline Lowenstein has happily lived in Winnipeg her entire life, growing up in the city's north end and residing in that part of the city for almost 80 years.

Pauline's parents, Chatze (Lifcitz) and Mendel Kanovsky, had emigrated from the Ukraine in 1920 with the intention of meeting an uncle in Saskatchewan. Instead they settled in Winnipeg, opened a store on Dufferin Avenue and raised their children, Rose, Eliyahu, Pauline and Gerry. An anti-Semitic incident on Dufferin prompted the family to move to a better neighbourhood, and so they settled on Selkirk Avenue and opened up a grocery store there.

Pauline recalls a good and loving childhood. She attended Aberdeen School until grade nine and then St. John's and was active in sports, particularly baseball, and in Habonim. After high school she studied at Success Business College and worked in the offices of the garment industry and for a manufacturer's agent.

Unusual for the times, Pauline continued working part-time after she married Rudy Lowenstein in 1948. When her mother passed away in 1952, her 16-year-old brother Gerry moved in with the newlywed couple. Gerry later moved with his father to New York where older bother Eliyahu was studying on scholarship at a yeshiva.

Pauline and Rudy had met at a Habonim meeting in 1947. His journey to a settled, married life in Winnipeg, however, was much less direct than Pauline's.

Born and raised in Germany, Rudy and his father Hugo were arrested during Kristallnacht and imprisoned at Dachau. When they were released, 17-year-old Rudy and his 15-year-old brother Ken were sent to England on the Kindertransport. Sponsored by a Quaker family, Rudy worked in the kitchen of Cambridge University until he was arrested as a German subject in England and interned on the Isle of Mann. From there he was sent to a POW camp in New Brunswick where initially he was imprisoned with SS officers. He was released from the camp when he was offered a job working on a Jewish farm in Manitoba. He then received his Canadian citizenship, enlisted in the Canadian Army and spent the remainder of the war years in the anti-tank division at Camp Shilo.

After the war Rudy worked for Crown Cap and in 1956 purchased the business with his friend Joe Frank, who had been interned with him. Rudy was an honest, hard working man who loved classical music, television sports and Canada. He spent many hours volunteering to speak publicly about his war-time experiences and to raise awareness about the Holocaust. Pauline's life also was enriched by many volunteer experiences. Over the years she worked on behalf of B'nai B'rith, Pioneer Women and Hadassah - serving as president of the Henrietta Szold branch - and for the St. Boniface and Seven Oaks Hospitals.

Both Rudy — who passed away in the fall of 2004 — and Pauline were very proud of their three sons. Howie, a lawyer, lives in Calgary with his wife Francie and three sons (Mark/Whitney/Michael), Arnie, an economist, lives in Boston with his wife Valerie and two sons(Jeremy/Daniel), and Jeff, a businessman, lives in Vancouver with his wife Cathy and two daughters (Rachel/Alana).

Although all three of her sons have left Winnipeg, Pauline remains very fond of the city and appreciative of its many educational, cultural and business opportunities. Since moving to a retirement residence last year she has made new friends, both Jews and non-Jews, and often feels like a rebbetzin because so many people ask her questions about Judaism.