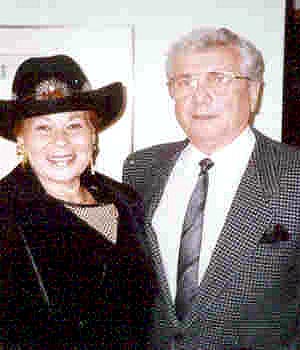 The matriarch of our family, Sarah Steinkler, was born in Dabrowa-Janow, Poland on November 3, 1904. Her mother died in childbirth and her father soon remarried. The woman he married was a cruel step-mother, and my mother decided to leave Poland. She had an uncle who had come to Winnipeg and she found the opportunity to join him here, arriving on May 13, 1929. Unfortunately, she was little more than a maid to her uncle and his family, and one day, while hanging out the laundry to dry, she decided to run away. She found herself in the "needle district" where she met a young man who spoke Polish, like her. He helped her to find a job as a sewing machine operator, and she became very skilled at this occupation. She lived on her own until she met my father, Abe Helman.

My father was born on December 5, 1906, in Zelna, Poland. He immigrated to Canada with his father, four sisters, and three brothers on June 13, 1927. He was the youngest. My grandfather was the mayor of the Russian village where they lived, and so was able to make arrangements for all of them to come to Canada.

My parents married on March 22, 1931 and established a home on Flora Avenue. My father worked in the fur business for most of his life, although for awhile my parents owned and operated the "Night and Day" restaurant at Logan and Princess. They had two children, my brother Rubin and myself. Rubin married Rita Goodman and they have three children, Mark, Carla and Elaine.

Our home was filled with Yiddishkeit and my parents taught us invaluable lessons through the way that they lived their lives. My mother had a marvelous sense of humour and in a consistent, loving manner taught us the values of mitzvah and tzedakah. Their orthodox lifestyle taught us the significance of being a good Jew. Helping others was a way of life, and nothing was as important as being a "mentsch".