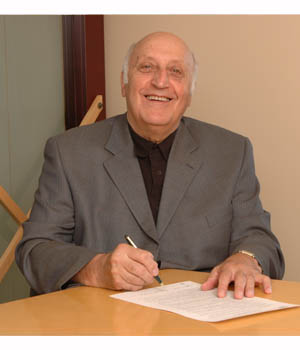 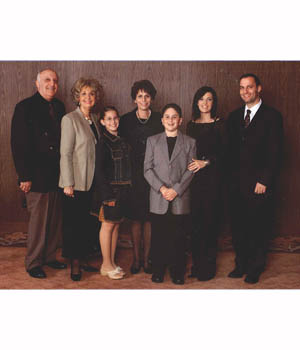 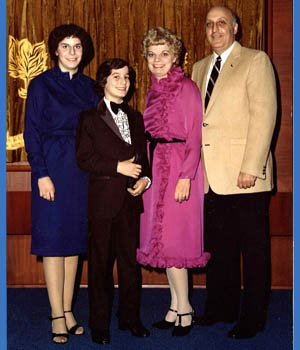 Barbara and Paul with Sharon and Stephen 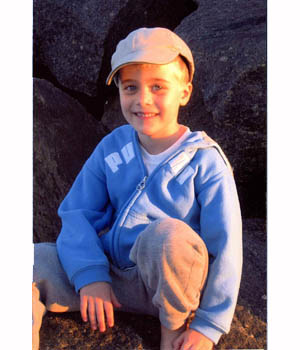 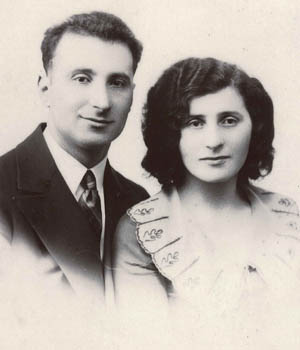 Basketball has been a central foundation throughout Paul Granovsky's life. It is the passion that gave him the opportunity to pursue a post-secondary degree, become a teacher, make lifelong friendships and feel good about his achievements.

But Paul's story really begins with the emigration from Russia to Canada of his father, Abraham. Abraham left Russia while still in his early twenties, leaving behind four brothers. Two of them later immigrated to France and Israel respectively.

In 1930, Abraham married Rose Kettner, a Ukrainian émigré. He worked as a tailor, and later was a foreman at Silpit Industries in Winnipeg. Rose was a strong-willed but kind-hearted woman who loved her family, and was an active member of Pioneer Women.

In 1940, when Paul was nine, the family was devastated by the death of Paul's sister, Tybie, at age four. Paul's brother Bernie, now in Toronto, was born in 1943.

Paul remembers a happy childhood. He had a Bar Mitzvah, played basketball and tennis, and was a member of the YMHA's Sheiks Club. Every Friday night, Paul eagerly looked forward to walking with his dad to Carruthers Park to watch the senior soccer games.

Paul attended Folk Shule until grade three, and then continued his education at Machray School and St. John's Tech, where he was on the provincial championship basketball team.

After completing high school Paul held various jobs and played basketball for the Stellars, whose coach, Martin Terry, represented a major influence in his life. The Stellars won back-to-back Canadian junior championships in 1950 and 1951.

Paul's' athletic accomplishments have been acknowledged with his induction into the Manitoba Sports Hall of Fame as well as the Manitoba Basketball Hall of Fame. In 1956, seven years after finishing high school, Paul was awarded a basketball scholarship to Minnesota's Bemidji State University, where he obtained teaching degrees in math and physical education. While at Bemidji, Paul was also a member and captain of the tennis team, winning a conference championship.

During a trip home to Winnipeg to visit his parents and friends, Paul met his future wife, Barbara (Blumes). Barb had come to Winnipeg from her hometown of Calgary to study nursing and meet Jewish young people.

On graduating from Bemidji in 1959, Paul attended Southern Illinois University, where he received his M.Ed. He returned to Winnipeg and taught at Westwood and Silver Heights Collegiates.

Barbara and Paul were married in 1962. They moved to Colorado with the goal of having Paul pursue his doctorate, but Barb fell ill and they were forced to return to Winnipeg. Paul and Barb had two children, Sharon and Stephen. The family, Paul remembers, was very close, spending summers traveling and vacationing extensively.

Currently, Sharon is a full-time mother to Kevin and Allison in Calgary, while in Toronto, Stephen is husband to Allison (Brenner) and father to Ben.

Paul worked as a physical education director at the YMHA on Hargrave Street, and then returned to the teaching profession with the St. James School Division. He loved teaching, and never experienced difficulties with his students. Paul also coached basketball, track and baseball, and served as president of the Manitoba High School Athletic Association.

Barb became seriously ill during the winter of 1994, and Paul consequently retired from teaching. They subsequently traveled extensively and enjoyed many good times. Barb passed away in 1994.

While on vacation with friends in Palm Springs, Paul was introduced to Claire Breslaw (nee Nelko). They were married in 1998. Claire's granddaughter, Sophie, is proud to call Paul her zaide.

In recent years, Paul has been active as a community volunteer with the Jewish Heritage Centre and Jewish Child and Family Service. His photo hangs in Winnipeg's Rady Centre acknowledging his inclusion in the Jewish Sports Hall of Fame.

Former students of Paul's still approach him to say hello, a tribute to his popularity and impact as a teacher. Closer to home, friends and family characterize him as a man of integrity who loves to golf, and is generous with his time.

"I am pleased and proud to be able to support the community in its many worthwhile activities through the Endowment Book of Life initiative."