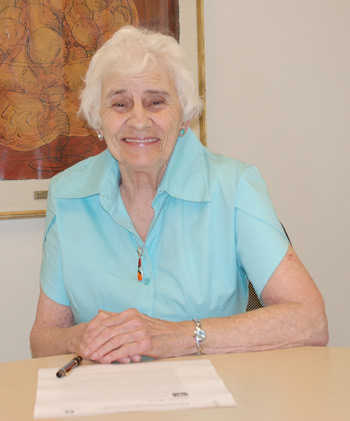 Pat Cohen signs her story for the Endowment Book of Life

It was a favourite refrain of my mother, her way of encouraging me to learn, grow, achieve, and excel. I appreciated her attitude, and I enjoyed a fulfilling career, am still excited about learning and reading, and still concern myself with the issues of the day.

As a left-handed kid growing up downtown and then in River Heights, I was, well, a klutz. Sports didn't come easily to me, although I eventually learned how to bike and swim (I still love swimming). So, I turned to books and read one every day; I knew how to read and write very well by the time I was five.

I come from a long line of colourful characters and exceptional leaders on both sides of my family. My father was Jack Cohen (I was a Cohen who married a Cohen). He was born in England in 1901 to Reuven and Sheindel (née Sherman). My grandparents were originally from Poland, and settled in Winnipeg around 1906. I admired how my grandfather made every grandchild feel like the favourite. I remember my Grandma Sheindel for her wonderful Pesach seders. She was a strong woman who gave birth to eight children, four of whom died at birth.

My mother, Gwen, was born in Winnipeg in 1909 to Peter and Rebecca (née Bardy) Lexier. The Lexiers, originally from Kamanets-Podolsk in Poland, were among Winnipeg's earliest Jewish settlers, although my grandparents first settled together in Portland, Oregon (where the Bardys lived) before joining the extended Lexier family in Winnipeg. I was named after my Grandpa, who died before I was born. I was very close to my Grandma Rebecca and remember making my way often from River Heights to her home in the North End to visit.

Both sides of the family were active in the community. The Cohens and the Lexiers were involved with the Mount Carmel Clinic; my grandfather, Reuven, was a founder of the Hebrew Sick Benefit Association; my uncle, Max Cohen, was the former President of Congregation Shaarey Zedek and the YMHA; my father and his brother, Wolf Cohen, founded the local furriers' guild; and my Uncle Wolf was an early contributor to the Winnipeg Foundation.

Leadership and generosity aside, where my family and extended family truly excelled was at quizzing/interrogating me about every boy I ever dated. They needed to know everything about him—and his family!

I was born in 1932; my only sibling, Phillip, was born in 1938. We lived across from the Mall Plaza downtown, then moved to Montrose Street and, later, Niagara Street. For school, I attended Queenston, R.H. Smith, and Kelvin. I had friends of all backgrounds and learned a lot about different cultures. When I was a bit older, I went to BB Camp as a camper and later as a counsellor, worked as a club leader at the YMHA, and volunteered at the Children's Hospital — a very powerful experience that has stuck with me.

Few women went to university in my day, but I wanted to pursue a career that would enable me to be mobile and independent. I earned my Bachelor of Arts degree at the University of Manitoba, where I was active in Hillel, and then studied social work at McGill University in Montreal. Some years later, I earned a Master's degree in psychology at the U of M.

I joke that I pursued the career I did because I was expected to be involved in the community, and I figured I might as well get paid for it! It was, in fact, a very meaningful career. I worked at the Baron de Hirsch Institute in Montreal where I was involved with Holocaust survivors and other Jewish clients, and later at the Children's Aid Society (later known as Child and Family Services) in Winnipeg. I was involved with adoptions, mental and physical health issues, and a variety of difficult cases, doing my best to help children overcome adversity. I cared deeply about my clients.

It was during the university years that I met Hy Cohen. I was dating his best friend at the time. Hy won me over and I'll never forget one of his early expressions of interest in me: "You're quite a pretty girl and you're very smart. But don't worry, I like smart women." For me, those were magical words!

We got married in 1954 and returned to Winnipeg from Montreal, eager to move forward with our careers, start a family, and engage in community life. Hy and I were involved with a study group that met in people's homes. Some of the members of the group ultimately went on to establish Temple Shalom. Hy and I were active at the Temple for many years.

We had three children: a daughter, Beryl, and two sons, David and Matthew. We enjoyed our time together as a family, including camping trips, and travel to Montreal, Vancouver, the Rockies, and summers at Lake Itaska in Minnesota. Hy passed away in 2003; Matthew in 2007. These were times of great sadness.

My life today is full. I still live in the house Hy and I enjoyed together on Beaverbrook. I'm blessed with three beautiful and charismatic granddaughters: Paula, Sari, and Marli, and my schedule is full. I assist at an English as an Alternative Language class for newcomers; I swim, garden, play bridge, and continue to read voraciously (especially historical fiction and mysteries). And I confess to being a "Trekkie" and a science-fiction enthusiast.

I am proud to participate in the Endowment Book of Life program as an expression of my fondness for the Jewish community, and indeed, for all of Winnipeg.