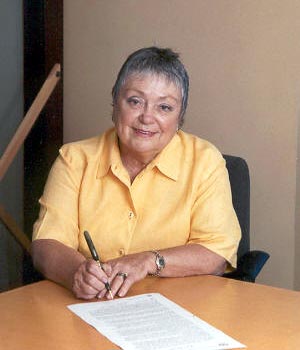 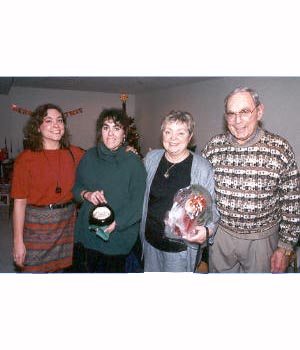 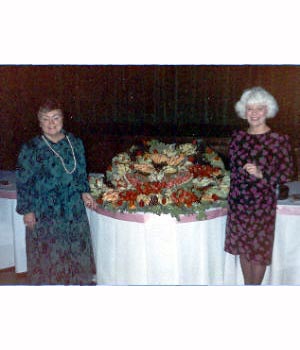 Pat and Beth Shore at their Bat Mitzvah, 1987 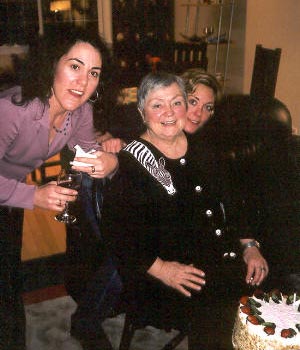 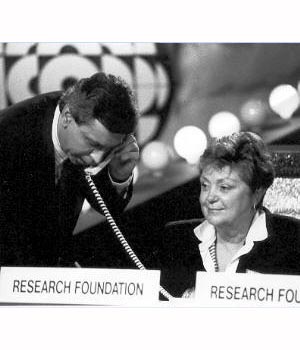 Pat Charad came to Judaism after living the first thirty years of her life "hardly knowing a Jew", as she readily admits. Today, she feels very much a Jew.

Born in Detroit, Pat arrived in Winnipeg as a baby and was raised by her mother, Mary Elizabeth, and her maternal grandparents, the Dick family, in the west-end of Winnipeg. This Irish family, made up of two sons and one daughter, was dominated by a loving but strict matriarch.

After attending west-end schools, Greenway, Hugh John McDonald and Daniel McIntyre, Pat worked as a clerk at Great West Life. Her dream to be a child psychologist was short lived, as money for university was not available. She eventually took an office position elsewhere, and taught herself bookkeeping and typing. Pat's memories of her time as a working woman are "fun-filled and very positive".

One Christmas Eve, Pat was invited to help trim a friend's tree. When she arrived, she discovered that she was only one of a number of guests, many of whom were Jewish. Here, Pat Dick met Issie Charad.

Life, she suggests, is always opening doors for people.

Issie was in the Air Force during World War II, and later came to Winnipeg from Montreal to open an office for Rubinstein Brothers, a company selling machinery to the needle trade. A chance arose to buy the business, and Issie had to borrow the down payment.

As their relationship evolved over a six-year courtship, the religion issue had to be faced. Pat decided to begin the process of conversion under the direction of Rabbi Schwartzman. Pat and her mother didn't have a problem with her conversion to Judaism, but she is not so certain her late grandmother would have been so understanding.

In 1963, Pat and Issie married, and began to live their life in Winnipeg. Pat remembers her first meeting with her orthodox mother-in-law. The day the two women spent together was the start of a close, warm, and loving relationship with Issie's family that remains intact.

For the past fifty years, Pat has been a member of the Chown Guild and was a Children's Hospital Foundation board member. Pat reflects fondly on her co-presidency of the Shaarey Zedek Synagogue Sisterhood, her work as gift shop Chair there, her Shaarey Zedek vice-presidency and her tenure as a Winnipeg Jewish Theatre board member.

Pat speaks of her late husband Issie's commitment to cultural Judaism, taking seriously the obligation a parent has to provide children with the tools to lead a Jewish life. Reegan and Judith consequently attended Ramah School in order to get a full understanding of Jewish tradition. Reegan, a sales representative, and Judith, pursuing her Master of Social Work degree in Vancouver, have both remained close to their mother.

Her Jewish identity and emotional attachment to Israel were strengthened when she spent time at Vad Hashom and Massada, following the Six Day War. Pat also has concerns about the dwindling of the Winnipeg Jewish community, but looks optimistically at the possibility of immigrants from other parts of the world adding to our numbers. Her memories of how easily she was accepted into the Winnipeg Jewish community solidify her identification as a Jew. A shining moment in Pat's life was being called to the Torah to celebrate her Bat Mitzvah.

Pat quotes husband Issie as often saying: "You're the real Jew in the family!"