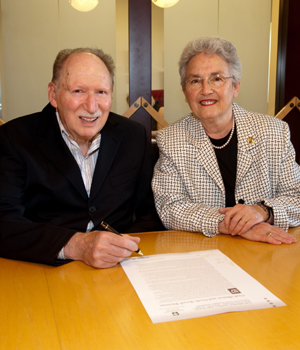 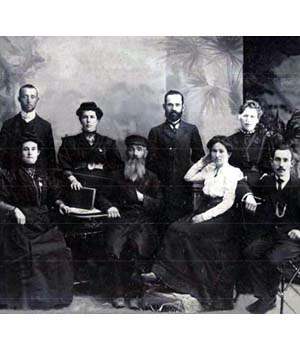 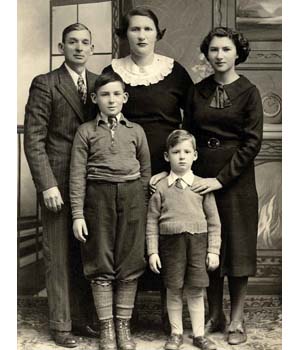 The Kleiman family in Winnipeg — David and Rose with children Riva, Sam and Soody 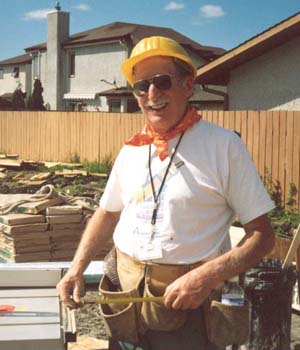 Soody works for Habitat for Humanity 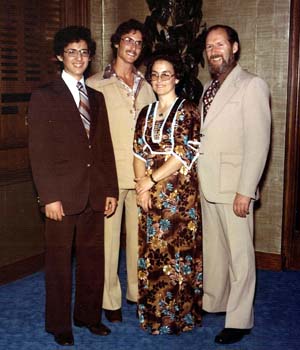 Soody and Orah with sons Simcha and Rafi (Rafael), 1976

While it was the Habonim youth movement that brought Orah and Soody Kleiman together more than 50 years ago, it is their shared commitment to family, community, volunteerism, and education that has enhanced their relationship for this last half century. Separately and together they have committed hundreds of hours to a variety of causes and concerns in both the Jewish and wider communities, and have, at the same time, created remarkable educational opportunities for others.

Soody (Israel) was born in Winnipeg in 1932 to David and Rose, who had emigrated from Ukraine in 1925 with three year old Riva. While Rose stayed at home looking after Riva, and later, Sam and Soody, David worked as a furniture builder and carpenter. Soody grew up in the North End, getting his English schooling at Aberdeen School and St. Johns "Tech" and attending the Talmud Torah for evening Hebrew and Jewish studies. Influenced by the example of his mother's sister Hadassah (Adele) who had made Aliyah to live on a kibbutz in Israel in 1933, he joined the Habonim Labour Zionist Youth movement at the age of 10.

Habonim quickly became a major influence in Soody's life. In 1951 he participated in the inaugural Habonim Youth Workshop, which was a nine month intensive work-study program designed to further develop the future leadership of the Movement with the expectation that many would make Aliyah. While this cemented Soody's desire to move to Israel, it inspired him with the idea that a Hebrew speaking summer camp should be created in Winnipeg.

Upon returning to his hometown, Soody convinced his fellow Habonim leaders that the existing Habonim summer camp — which would be losing most of its leadership to Aliyah — should be converted into a Hebrew- speaking camp that could appeal to all local Jewish youth. The senior Labour Zionists and Keren Hatarbut (an organization to promote Hebrew language) were ultimately convinced that a Hebrew-speaking camp was a desirable goal. In 1953 Camp Massad opened with Soody as the Head counselor for the first two years (summers 1953-54) and with the assistance of other Habonim Camp veterans on staff incorporated even more Hebrew language usage into the daily programme. That same year Soody met Orah when they both attended a convention in Detroit of the Habonim group that were committing to make Aliyah together, in 1954, to a Kibbutz. Orah had been very involved with Habonim in her hometown of Brooklyn, N.Y. In 1952 she participated in the second Habonim Youth Workshop in Israel. Afterwards she became the Rosh Machaneh of Crown Heights Habonim.

Orah's mother, Edna, had immigrated as an infant to the USA from Russia in 1901. Her father, Harry Peskin, had emigrated from Romania in 1911. He served in the US Army in WWI. During WWII he worked as a shipwright. Orah's parents, as well as her four older brothers Milton, David, Stanley and Jerome, all knew her as Helen. Upon joining Habonim she had adopted the name Orah, meaning light as the Hebrew translation of her given name, Helen. In 1954 Orah and Soody married and made Aliyah afterwards.

Orah and Soody lived on a Kibbutz for three full years, returning to Winnipeg with their son, Simcha, in 1958. Orah discovered that Winnipeg was a good place to raise a family, enjoy cultural offerings and get involved with the community. Soody established a successful career as an electrician. When her second son Rafael (Rafi) started Grade 1 at the Talmud Torah, Orah also returned to school full time. She completed her Bachelor of Arts and Bachelor of Education degrees and a 20 year career teaching elementary school with Winnipeg School Division 1.

During this time Orah became very involved with Na'amat Winnipeg while Soody became active with the Talmud Torah and Joseph Wolinsky Collegiate, where their sons attended school. In working on the JWC Education committee, Soody was instrumental in bringing Israeli teachers to Winnipeg, creating a mission statement for the school and advocating inclusion of Holocaust studies as a full course, rather than an extra-curricular one. He also served as an outspoken member of the Winnipeg Jewish Community Council and the Winnipeg Board of Jewish Education for many years. He was a member of the dance group led by Tamar Cohen, which was a precursor of the Sarah Sommer Chai dance group.

In 1961, missing the political discourse that had characterized Habonim gatherings, Orah and Soody, together with like-minded couples, created an informal adult educational group. This group came to be known as "The Saturday Night Discussion Group". It met almost every other week, to listen to informed speakers on a variety of topics in an informal setting and surprised many of them with the keen interest and comments that always ensued. Forty-eight years later, the group still meets regularly with undiminished interest.

Since retiring in 1990, Orah has kept busy as a full- time volunteer, continuing her work with Na'amat, delivering Meals on Wheels, visiting seniors on behalf of Jewish Child and Family Service and working at the Childrens' Hospital Book Market. Orah and Soody also helped out at Winnipeg Harvest. For many years Soody volunteered his time at Habitat for Humanity both in constructing new homes and with their building committee.

It is obvious that Orah and Soody recognize the importance of education. For the last several decades they have relentlessly pursued education for themselves, for their children, for their friends and for others. This devotion to education is evident in the scholarships that they have generously established to support both Jewish and non Jewish students in need and in the accomplishments of their two sons (both JWC graduates). Simcha, a father of three, is currently Head of the Anaesthesia Department at the Montreal Jewish General Hospital, while Rafi, a father of two, holds the Canada Research Chair in Nanotechnology at McMaster University.