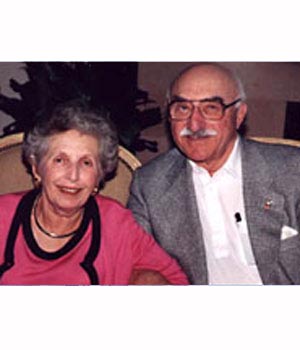 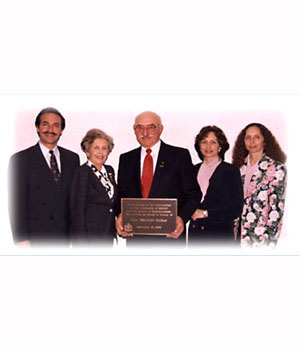 My father, Sam Vickar, left Lithuania as a young man and immigrated to South Africa with one of his two brothers. Although they went into the bakery business in Cape Town, my father always dreamed of one day owning land and becoming a farmer. When a Canadian government ad offering quarter sections of land for sale caught his attention, he applied and was accepted. In 1906 he arrived in Star City, Saskatchewan, and began his life as a mixed farmer. Initially he worked during the week at a dairy farm near Melfort, about 35 miles from his own homestead, and farmed his own land on weekends. Eventually he was able to devote his time exclusively to successfully developing his land, which became an integral part of the community of Edenbridge. Sam married Gertrude Gelman and with her raised five sons, four of whom now live in Winnipeg.

I was born in Edenbridge, and like my parents, have always been active in community affairs. In 1947 I married Florence Zeitlen whose father was a teacher at the Peretz school in Winnipeg, and we settled in the small town of Gronlid near Melfort. In 1955 we moved to Melfort in order for our three children to get a Hebrew education. In 1976 we moved to Regina and in 1983 to Winnipeg. In Regina I served on the board of the Beth Jacob Synagogue.

I served as president of many organizations, including the Hebrew congregation, B'nai B'rith, the Melfort Rotary Club, and the Melfort Elks Lodge. I also served as chairman of the United Israel Appeal, and as a city alderman, and then as city mayor for seven years. I was elected as a Member of the Legislative Assembly to the Saskatchewan provincial legislature, and, until 1982, served in the provincial cabinet as Minister of Industry and Commerce, and Minister in charge of the Saskatchewan Research Council and Saskatchewan Economic Development Corporation. I was the first and only Jewish cabinet minister in Saskatchewan. In 1993 the Saskatchewan government recognized me for my contribution to the welfare of the province by naming a government building in Melfort 'The Norman Vickar Building.'

Since moving to Winnipeg I have been active in many community endeavours, as a WJCC member, as chairman of the JNF high holy days campaign, and as president of the Saskatchewan and Manitoba JNF. Currently I am serving on the board and executive of Shaarey Zedek Synagogue and of the Jewish Heritage Society. Florence and I have three children and eight grandchildren. They keep us busy.