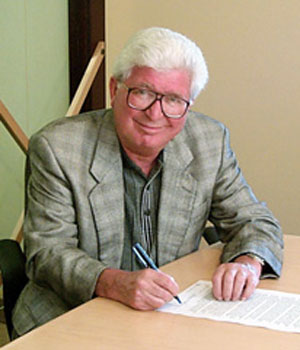 I grew up in a wonderful time. Life in Winnipeg's north end in the 40's and 50's provided great memories, including the YMHA and Camp Stephens in summer, and hockey on the Red River and curling at the Maple Leaf Curling Club in winter. Many life-long friendships were made - on Cathedral Avenue, at Luxton and St. John's schools and at the Y and AZA.

My uncle, Jacob (Jack) Shore came to Winnipeg in 1910 from a shtetl in Russia where he had apprenticed as a watchmaker. A year later, my father, David Joseph Shore, also a watchmaker, followed and in 1915 they established Shore Brothers Jewellers at Higgins & Main. They worked hard and, in 1912, were able to bring their parents to Winnipeg - Reb Samuel (Shimshon) and Eva (Chava) Shore, as well as a sister, Anne Shore.

My mother, Bertha Ella Cossoy also came to Canada in 1910, when she was 7 years old. Her father, Solomon Isaac Cossoy was related to the Oretzky family in Winnipeg and immigrated with his wife, Sonia, and three children - my mother Bertha, and two brothers, Marcus and Philip. Another sister was born in Winnipeg, Mary Cossoy Levi. An older brother of Solomon Isaac Cossoy moved to the Hirsch colonies in Argentina.

Following graduation, I attended the University of Manitoba and Pacific University, and then joined the jewellry business from 1952 to 1972, when Shore Brothers Jewellry was sold. I was a jewellry manufacturer's representative until my retirement in 1997.

In May, 1960 I married Beth Slotin, daughter of Sam and Corinne (Ripstein) Slotin, at the Shaarey Zedek Synagogue. We have two children. Our daughter Sydney, born in 1961, is a York University honors graduate with a Theatre major, and is a stage manager for the Stratford Festival. She is married to Wayne Sharpe. Philip, born in 1964, is a graduate of the University of Manitoba with an honors degree in Economics. He has been in Japan for the last eight years where he owns an English school.

We have received great satisfaction from our involvement in the community. I am gratified to be one of the founders of the Winnipeg Jazz Festival. I have volunteered for the Manitoba Theatre Centre and the Pan Am Games, and have served on the Board of the Winnipeg Fury Soccer Club, and on the Endowment Book of Life Committee of the Jewish Foundation. I am especially proud of Beth, who founded Flair Travel in 1972 and has untiring energy for her many volunteer projects - among them the Winnipeg Folk Festival, International Children's Festival, Winnipeg Arts Advisory Council, and recently the Pan Am Games, where she is working to co-ordinate the many volunteers.

When my Dad came to this country, volunteers took time to teach him to read and write English. There was nothing in it for them except to build community. My hope is that young people will see the example of their forefathers, and will be willing to pick up the task and give of themselves to keep the community going.