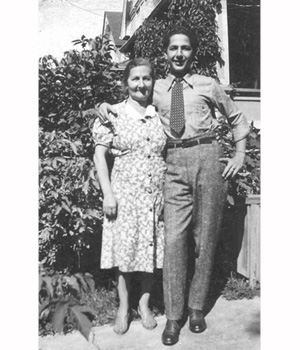 Norm with his mother Chana 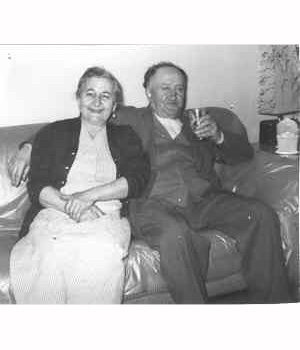 L to R: Norm's brother Sam, their mother, and Norm at Norm's Bar Mitzvah in 1940

I was born in Winnipeg on July 28, 1927, to Yitzhak Yossel and Chana Portnoy Bager, the youngest of six children and the only one born in Canada. Ma and Pa had arrived in Winnipeg from Somgorodok,Ukraine in 1925 with my five siblings: Sam, Beth [Alte], Sonia, Sylvia [Zlota] and Bill.

My father was a devoutly religious man, who, like so many of his peers, was faced with the necessity of making a living...he struggled to balance his orthodox beliefs with working on Shabbat... he had no choice, but never forgave himself...it was a hard life.

My mother was a real Yiddishe Mama, unselfishly devoting all her energies to her family, grateful for what she had and envying no one.

Raised in a very "observant" Jewish home, I attended and graduated from the Talmud Torah, having acquired a good grounding in Hebrew prayer as well as a fluency in Yiddish, which was the language spoken at home.

I began singing in Cantor Brownstone's choir at a very early age, and was amongst the first youngsters to lead Shabbat services and "bentsch" Rosh Chodesh.

At the age of sixteen, I left school and began working in clothing wholesale, eventually becoming a travelling salesman. In 1950, at the age of 23 I met the love of my life, Judith London. We were married in 1952 and were blessed with three wonderful children who have given us an over abundance of love and joy.

In 1959 I embarked on a new career, becoming a manufacturer's agent, representing suppliers in Canada, the United States and Asia.

Our children: Pamela, born in 1954, is our eldest. She was married in Israel, but later moved to Montreal where their daughter Kinneret Adah was born on May 31, 1987. Pam and Kinneret moved to Winnipeg in August of 2000, an event that has been a source of great happiness to us. Kimberley, our second daughter, resides in Toronto with her husband Tom Nyland Hansen. Steven, our son, also resides in Toronto with his wife, Jodi, and their two sons, Samuel Jonathan and Theodore Isaac.

Life in Winnipeg has been good... and full... as a member of the Glendale Golf and Country Club since 1963, I love the game, playing several times a week during the golf season. Judith and I have always supported the arts, as long-time subscribers of the Winnipeg Symphony Orchestra, Manitoba Chamber Orchestra, Virtuosi Series, Royal Winnipeg Ballet, Manitoba Theatre Centre, Warehouse Theatre, Winnipeg Jewish Theatre and the Prairie Exchange Theatre.

I continue to practice my vocation as a manufacturer's agent, enjoying my work with as much pleasure as I ever have.

All in all, I consider myself to be the luckiest, wealthiest man on earth... my treasures are my wife, our three children and (as of this date) our three precious grandchildren, who have given me unbounded joy, pleasure and "naches."