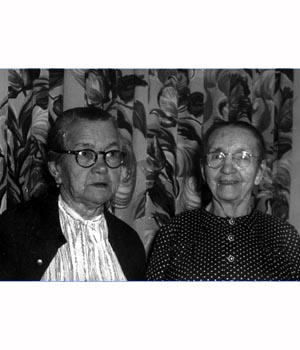 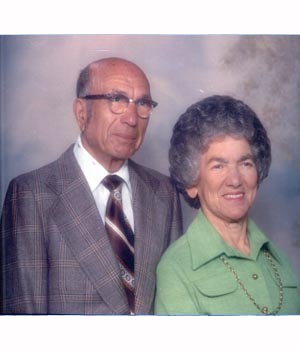 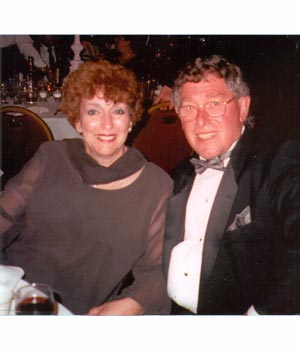 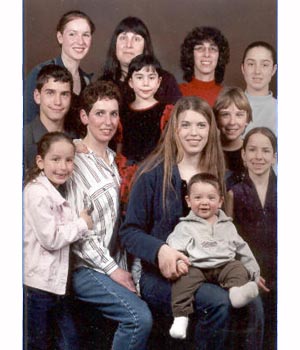 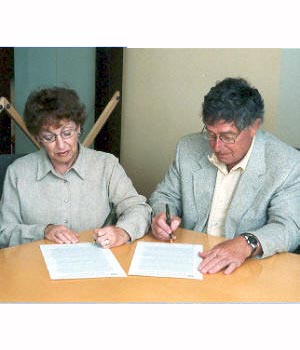 Norma and Victor sign their Endowment Book of Life stories

My paternal grandparents were Malka Kovensky and Shlome Fordman who met under the Chupah in their shtetl in Russia late in the 19th Century. My grandfather died when my father was 3 years old in 1904. In 1913 Malka chose to move her family to Canada, following her son-in-law, Joseph Freiden and her daughter Fanny to Winnipeg. This is how my father Saul Fordman came to Winnipeg at the age of 12 together with his three other sisters. Their first home here was on Stella Ave.

My maternal grandparents were Sarah Turbovsky who met her husband David Lipchen as a teenager and steadfastly refused to marry anyone but him. In 1914 they too made the decision to leave Russia and come to Winnipeg. Their only daughter, my mother Tillie, was 10 at the time. Four sons also accompanied the family, one more was not permitted to leave because of a case of pink eye. The family settled into a home on Aberdeen Ave.

My father's sisters went to work in order to enable him to attend school. Both of my parents attended Aberdeen and St. John's Tech schools. When they got engaged this began a lifelong friendship between my two grandmothers. My parents married on July 21, 1929 and were married for 67 years before they died 4 months apart in l996. Shortly after their marriage my father built a house on Cathedral Ave east of Main Street, the home where I was born and lived until my marriage. This home was shared with my father's youngest sister Dorothy, her husband Joseph Mayman and their son Shlomo.

One of my father's first jobs was selling newspapers on Portage Avenue. He later became a bookkeeper in a contracting firm and learned the business well enough to start his own company, Modern Builders & Decorators, which later evolved into Saul Fordman Ltd. His offices were downtown on Garry Street -upstairs were lawyers Bill Norrie, Charlie Huband and Scott Wright. When he decided to stop building houses, he began to do insurance work for two friends involved with prominent insurance companies - the same men he had sold newspapers with on Portage Avenue many years before. He was involved in this business for over 25 years until his retirement. My father was meticulous and honest with money, and had an impeccable reputation - his counsel was sought on many topics.

I was born on July 23,1937 and have one older sister, Reva Oman. I attended Peretz Shul for kindergarten, Luxton School for grades 1 to 9, St. Johns Tech for grades 10 and 11 and United College for grade 12. After school I worked for the Manitoba Power Commission in the steno pool.

Living in Winnipeg's north-end Jewish enclave was very special - we felt like the chosen people and thought we had the best life possible. My parents kept a kosher home and were loving, warm, wonderful parents. Life revolved around activities at the "Y"-my club, the "Saks", was very special to me - in fact, we still meet several times a year! We had a close-knit extended family and my growing up years were truly wonderful.

I met Victor Chernick at my 15th birthday party -we got pinned, then engaged and married on May 19, 1957. Marla was born in 1959 while we still lived in Winnipeg. In 1960 we moved to Baltimore where Victor was training in Pediatrics at Johns Hopkins Hospital. There Sharon was born in 1961, Richard in 1962, and Lisa in 1964. The family returned to Winnipeg in 1966, where we all still reside. We now have 11 grandchildren - 9 girls and 2 boys - and one great-grandson. Much of my life has been centered around my family, although I have spent some time volunteering with Hadassah and Kinneret, and still do "cards" for the CJA. The Bridge Group has also been a very special part of my life. In the last five years I have been taking courses at the University of Winnipeg and have thoroughly enjoyed the opportunity to study and learn new things.

Having come from such a warm community-centered childhood, my dream is for future generations to experience the same close-knit atmosphere. I have been greatly encouraged by the Campus and spend as much time here as possible. Seeing the community gathered in one place - from pre-schoolers to the elderly - gives me a great deal of hope for the future. The Campus provides this generation's opportunity for community, and I look forward to the day when the dreams of our Jewish young people center around Winnipeg. For me it has been a wonderful home!