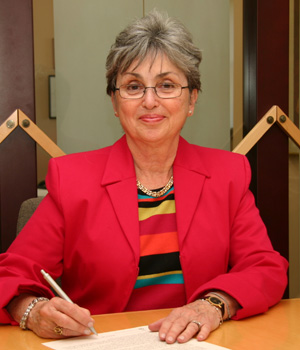 Nessie Cogan signs her story for the Endowment Book of Life 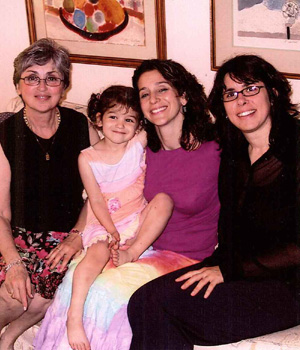 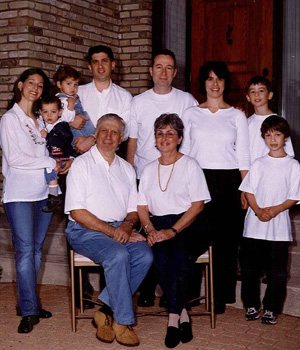 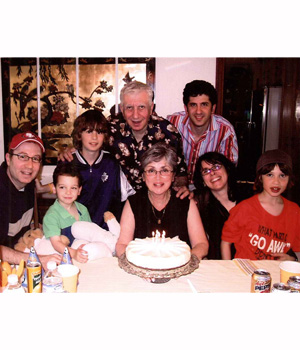 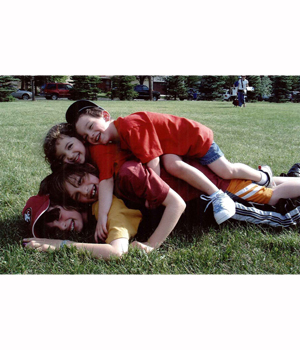 My mother Marion (Yaffe) Gitelman was born in Winnipeg to Esther and Nussen Yaffe. Unfortunately, my grandfather died when my mother was only six years old. Because of this, she and her siblings were raised by my Baba Esther alone.

My father Louis Gitelman was born in Slowatycze, Poland to Genendel and Joseph Leib. My father and his family were very prominent in the fur business in Poland before the war. They all came to Canada between 1936 and 1938 leaving two married sisters who chose to stay behind with their husbands and children. Unfortunately, his father died in 1939, only a short time after coming to Canada.

Although my grandfathers both passed away young, I am fortunate to have had many wonderful female influences in my life. Both my grandmothers were in my life until my early twenties and my mother until I was 61 years old. Genendel, known to me as Baba Gitelman was a very kind person. Baba Esther was very warm and loving, as was my mother.

My parents were married in 1939. I was born in 1940 and was named after my grandfather Nussen. In 1948 my sister Lynda was born. We were raised in Winnipeg's colourful and ethnic north end. I attended Champlain Elementary School, Luxton Junior High School and St. John's High School. Lynda moved to Toronto in 1969. Although there is distance in land we remain very close.

In 1958 I met Harvey Cogan. On July 30, 1961, Harvey and I were married. We are now celebrating our 45th wedding anniversary and have a wonderful marriage based on love and respect. We are blessed with two children: Allan Gerald (March 8, 1965) and Sherri Lisa (August 6, 1966). Allan was named after his maternal great grandmothers Esther Yaffe and Genendel Gitelman. Sherri was named after her paternal great grandfathers Shia Sosowsky and Yehuda Leib Cogan.

Harvey worked for London Life Insurance Company for the first 17 years of our marriage. In those years I was fortunate to be able to stay at home and raise our children. They are our greatest source of pleasure. Over the years I loved preparing for the Jewish holidays and having our home filled with family and friends.

In 1975 we bought a small sunflower seed business, Tasty Seeds, with our close friends Shirley and Dave Chochinov. Allan and Sherri spent their summers working in the plant and we have many fun and fond memories of these times. We all worked hard together building it into a successful business with distribution of our product across Canada. We are very proud of what we accomplished.

During the summer months we would go to Gimli. We spent 27 years enjoying our trailer in the Gimli Trailer Park. We occupied our time with friends; barbecuing, having sing-songs around the bonfire, spending long relaxing days on the beach and enjoying leisurely walks.

In 1991 Sherri married Ron Gall. They have two beautiful sons, Daniel Tovi born March 14, 1995 and Noah David born November 29, 1996. In 1995 Allan married Shawna Cass. On July 31, 2002, twins Lindsay Ronit and Joshua Matan were welcomed into the family. We feel truly blessed that they all live in Winnipeg. My husband, children and grandchildren are what my life is about and I am grateful to G-d for all that has been given to me.

In 1995 we sold our business and entered early retirement. This has given us the opportunity to spend more time with our cherished children and grandchildren. We are their biggest fans and love 'just being Baba and Zaida!" We are also able to enjoy spending our winters in Palm Springs. Although we are away for long periods, we are always happy to return home to our Jewish community.

Retirement has given me the time to pursue my hobbies and to spend time at the Asper Jewish Community Campus in a variety of programs. The campus is a place that promotes community by having programs for the very young to those in their senior years.

We are pleased to be participating in the Endowment Book of Life program and we are thankful for the opportunity to make a contribution to the continued success of the future of the community; one that we are proud to be a part of.