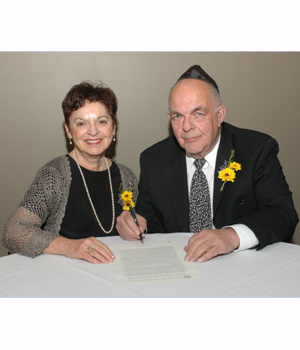 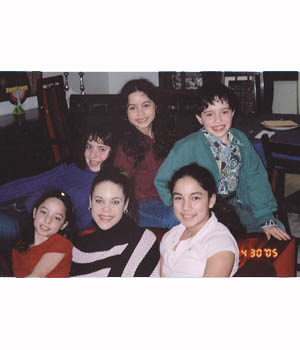 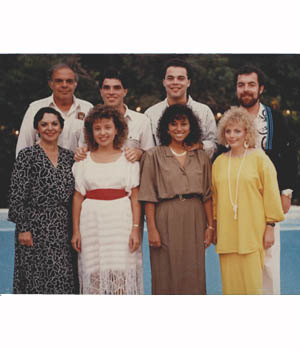 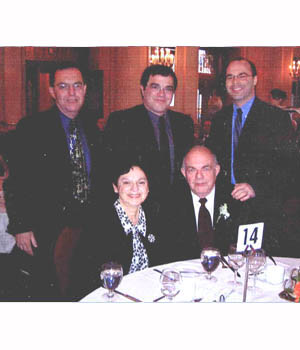 Naomi and Jack with their three sons L to R Stephen, Arthur, Kenneth 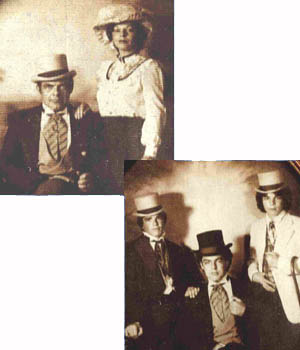 Naomi Chapman's parents were both born in Russia. Her father, Morris Romalis, arrived when he was an infant. Her mother, Sophie Gallis, arrived as a teenager who, with other family members, escaped from the pogroms. Naomi remembers her paternal grandmother as a tiny, unassuming woman who raised six children under difficult financial circumstances. One of her sons was selected to attend university — his siblings sacrificed their education in order for him to have that opportunity. Naomi's maternal grandfather was a man with a great sense of humour and a true joie de vivre. His memory still brings a smile to Naomi's face when she recalls him at the movie theatre that he attended twice a week, his pockets filled with candies and fruit to supply the various members of the family who might come by. Zaida always lived life to the fullest until he was close to 90 and was hospitalized — "shoin genoog" (that's enough) he said and shortly afterwards he died.

Naomi's memories of her parents were of a couple affected by the Depression, along with many of their contemporaries. Her father worked for the CNR as a railroad telegrapher. He retired at 65 as head of the Winnipeg office and died two months later. Her mother was a woman who was talented, refined and cultured. Her great joy in life was to become the grandmother of a little boy, and tragically, two weeks after his birth, she passed away.

Growing up in Winnipeg's north end, Naomi's home address put her outside the area to enter the school that most Jewish children attended. She has memories of anti-Semitism from students and even from some teachers while attending elementary school. She also attended night school at the Peretz School. Moving to St. John's High School proved to be a great relief. Naomi has fond memories of Friday evening Habonim socials, Habonim Camp at Winnipeg Beach and sorority life while attending the University of Manitoba.

It was at university, from which she graduated, that Naomi met the man that she describes as the most significant person in her life, Jack Chapman, her husband of 50 years. She describes him as warm, friendly, empathetic. How had his life unfolded so that he developed such character?

Jack was Winnipeg born, the second youngest of eight children born to Benjamin Chmelnitsky and Katie (Uriew) both of whom were born in Russia. Although there are few descendants that still go by the name Chmelnitsky, Jack has written a comprehensive family history chronicling the many descendants of the six siblings that came to Canada in the very early 1900's. Jack's father operated rural general stores, before settling in Winnipeg. Sadly, he died when Jack was only nine years old. As a result, Jack's intrepid mother began a successful career in the catering business, Menorah Catering. Growing up on College Avenue, a street primarily inhabited by Jewish people, Jack attended the regular north-end day schools and the Jewish Folk Shul in the late afternoons, and enjoyed good times at BB Camp in the summer and in school and street activities. Considerable time was spent helping his mother in the catering business. Jack credits his mother as being a strong influence in his life.

While at university Jack was president of his fraternity, Sigma Alpha Mu. Since graduating in 1953 and receiving his call to the Bar, Jack has had a rewarding legal career. He was a partner in Simkin Gallagher and later in Taylor McCaffrey Chapman Sigurdson, both major law firms. Jack has had a distinguished career and was appointed Queen's Counsel in 1965. One of his greatest honours was to be elected the president of the Law Society of Manitoba in 1987/1988, a great affirmation from his peers. He is a Life Bencher of that Society.

Initially Jack practiced civil litigation and corporate law and subsequently came to be accepted by all parties as a neutral mediator, conciliator and arbitrator. Jack's legal career afforded him the opportunity to plead several cases in the Supreme Court of Canada and to be involved in arbitrations and mediations throughout all of Canada. Still practicing today, in 2004 and 2005 Jack was appointed by the governments of Manitoba and Canada, with the approval of the First Nations, to two highly sensitive positions dealing with compensation for members of the First Nations - a testament to the regard with which he is held. One position is as one of the thirty-four adjudicators chosen across Canada to determine the compensation to be paid respecting claims by students who were abused at Residential Schools. The other is as the Independent Chairman monitoring the distribution of unallocated Treaty Lands still due to various First Nations under the Treaties entered into well over 100 years ago.

In addition to his regular practice, Jack has found time to lecture at the University, to do presentations for the Bar Admission course, and many other continuing education forums. From a recreational point of view, Jack is an Advanced Amateur Radio Operator (ve4ae), and at age 50 became a licensed pilot.

While Jack was expressing himself through his work and hobbies, Naomi, after being a stay-at-home mother for their three children, returned to the workforce. She worked at the fledgling Manitoba Theatre Workshop (now Prairie Theatre Exchange) as a publicist. Following that she worked at CKY Radio as a copywriter. Finally, she worked as the Events Coordinator for the Winnipeg Convention Centre. After her retirement, she enrolled at the University of Winnipeg courses for seniors. There she has taken, and continues to take, courses in a wide variety of subjects that are interesting, stimulating and fun. She also attends Dance Aerobics three times a week.

Naomi and Jack are very proud of their three sons, Arthur (Jo-Ann), Stephen (Sima) and Kenneth (Michelle). Their six grandchildren are a cherished part of their lives. They both share a belief in the concept of community and its importance in a person's life. Both have been involved in numerous community organizations. Although Jack does not always agree with some decisions made by certain Jewish community organizations, he recognizes that it is crucial to be part of the community and he has served as a senior officer and director of many organizations.

Jack and Naomi both speak of the importance of leading a decent, honourable life, and feel they have instilled these values in their children. Jack has a credo, "remember where you came from, what you do and have done, and what you will leave behind". Their involvement in the Endowment Book of Life is one measure of how Jack and Naomi have led their lives and their willingness to leave something behind.