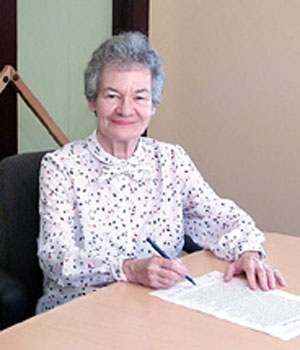 I was born in September of 1924, the only daughter of Frank Ellis Dufty and Mary Butler Dufty. My Grandfather Butler came to Canada and found work delivering milk. He then moved his wife and family from England and my mother was born in Montreal in 1886. My father's family emigrated from England and came first to the United States, where my father was born in 1887. When he was three months old, the Dufty family moved to Montreal. My father was taken out of school at age 12 when his father died, and took a job delivering coffee to support the family. He later became Manager for Canada for Yorkshire Insurance. He was a self-educated man who provided well for his family - his wife, a pianist and organist whom he married in 1915, my brother, Donald Spiers Dufty (born in September, 1916) and me.

I grew up and was educated in Montreal, earning my Bachelor of Arts degree at McGill University in 1947. At the time, the University of Toronto School of Social Work (not yet a faculty!) had already initiated a Group Work specialization and I chose to take my Master of Social Work there. I learned a great deal about the group work process both through my studies and my field work placements at the Y.W.C.A. and at Central Neighbourhood House. Subsequent jobs with various camps and with the United Cerebral Palsy Association of Cleveland, Ohio added to my work experience.

In 1964 I moved to Winnipeg and in September, 1965 I joined the staff of Winnipeg School Division #1 Child Guidance Clinic which I enjoyed until my retirement in 1985. As a social worker, I was part of a team of five disciplines - Social Work, Psychology, Reading, Speech, Hearing and Language, and Psychiatry. We worked in schools, bringing together the required professionals, school personnel and the referred parent(s) and child. I found this to be a very rewarding and fulfilling experience.

Although not Jewish myself, through the years I have met many wonderful Jewish people. One of my volunteer activities has been running a bridge group at Lion's Place. It is there that I met Anne Ross, founder of Mount Carmel Clinic, who invited me to play bridge at the Gwen Secter Creative Living Centre. The Centre has become a favorite place of mine, and the people and programs there have brought great joy to my life.

My parents had a tradition of tithing - giving 10% of their income to helping others. This value is one which I too believe in. There have been many women who have, in one way or another, contributed to my life. My bequest to the Women's Endowment Fund is a way of saying thank you to those women, and at the same time giving me the opportunity to, in turn, help others.