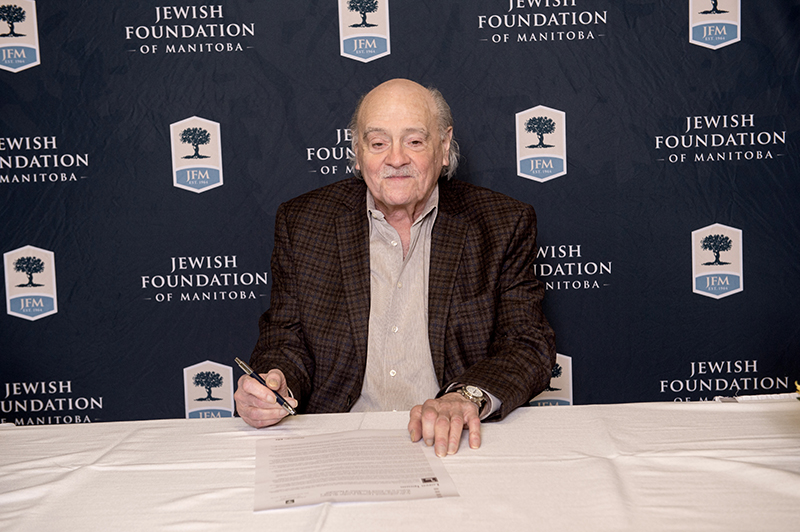 Morton Simcoe signs his story for the Endowment Book of Life

Marks "Max" Simcovitz, my grandfather, was born to Woolf and Anna Simcovitz in 1877 in Kiev, Russia. His wife, Sarah Puzarinsky, was born in 1880. Fleeing persecution, they came to live in Manchester, England and in 1904, together with their young daughter Celia, they immigrated to Montreal. My father, Irving Simcovitch, was born in Montreal on January 14, 1905.

Over time, Max built a small chain of shoe stores and also bought a shoe factory. His entrepreneurial skills were legendary as at one time he found a space and then rented out tables for purposes of playing cards. The government became aware of this and charged him with gambling. Together with his lawyer, Joseph Cohen, he was able to prove his innocence as he had never actually participated in the gambling himself! He died on October 7, 1933 at the age of 54. By that time my father was already working in the family shoe business and continued to for many years. The depression was hard on the shoe business and it floundered, but reportedly my father opened up a new store on the very day I was born, November 23, 1938.

My mother's parents, Hyman and Bella (Rosenberg) Rokita also immigrated to Montreal in 1904. Originally from Spain, the Rokita ancestors had been among the Jewish families forced to leave that country in 1492, and they had settled in Poland. Rachel Rokita, my mother, was born in Montreal on August 19, 1908.

Hyman Rokita developed a structural steel business that specialized in metal fire escapes and also the framework for large billboard-style signs. He was also very involved in the Jewish community and was the first president of the new Chevra Tillum Synagogue.

My parents married in 1937 and raised their family, my brother Barry and I, in the modern Montreal suburb of Snowdon. My parents were quiet and hardworking people. My mother's journey had an extraordinary impact on my life. When I was 12, she went into a deep depression that lasted for ten years. She was hospitalized at the Allen Memorial Institute. The treatments she received there, including shock therapy, ultimately helped her and she resolved to help other adults who were experiencing severe psychiatric challenges. Together with two friends, she founded Forward House, which was incorporated as a non-profit organization in 1962. She worked tirelessly to raise funds to establish a meaningful program that would help individuals learn how to cope with their difficulties, and how to manage their lives more effectively and independently. She was successful in obtaining government funding as well as many private and corporate donations such as from the Molson family and the Bank of Montreal.

After high school I attended McGill University for a year and then, while working during the day, took night classes at Sir George Williams University (now Concordia) to obtain my B.A. degree. I have had an interesting career path. Early on, I worked for a small family business called Customcraft Industries that manufactured and supplied window coverings, bed linens and room divider curtains for hospitals. That company was approached by Johnson & Johnson who had developed the "J Cloth" to find applications for this new pseudo-fabric for the hospital industry. This led to the creation of disposable face masks and the aprons and caps worn by nurses in those days. Applications for this new product were also found in the hotel industry and the company began producing disposable aprons. masks and chef's hats, first for Ritz Carlton hotels and then throughout the country. After leaving this company, I worked for The Bay for a year, and then took a job as a manufacturer's agent for an electrical supplier with my territory covering Quebec and the Maritimes.

I was introduced to Elaine Thomson by a friend. Elaine shared some of the same qualities I loved about my mother — she was beautiful, quiet but with a deep inner strength, very competent, charismatic and passionate. Elaine was from Winnipeg but was working for Sears in Montreal as the advertising copy chief. The headquarters for Sears was in Montreal.

Elaine's father, Dave Thomson, came from a family that had a lumber business in Barrows, Manitoba. Although Elaine grew up in Winnipeg, her father was often up in Barrows helping to run the company. When that company ended in the late 1940's, he opened Niagara Grocery at the corner of Grant Avenue and Niagara Street. Elaine's mother was Ruth (Gorenstein) Thomson. The Gorenstein family had come from Europe in the 1920's and initially worked as cattle traders. They later opened the Lyric Theatre in Beausejour, Manitoba and also a drive-in theatre on north Main Street in Winnipeg. It was when I saw Elaine's relationship with her mother and her sister Judy (Bob Steele), that I knew I had met the right girl. Elaine's mother was soft-spoken, pleasant, and had an uncommon intelligence that shone through everything she did.

We were married on August 22, 1976 in Winnipeg. We first lived in Montreal, then moved to Toronto for two years before making our permanent home in Winnipeg. Our first house was on Carpathia Road, and we later moved to a bungalow on Montrose Street. Once settled in Winnipeg, I worked for Eaton's and Elaine became advertising copy chief for The Bay Northern Stores throughout Canada, a middle-management job that she loved and excelled at.

In 1978, while living in Toronto, our son Jeremy was born. Today Jeremy works as Director of Technology at Oxygen Technologies in Winnipeg. He is married to Leslee Braun who is an ultrasound technician at Seven Oaks Hospital. Our second son, Benjamin, was born in Winnipeg in 1982. After working as an academic advisor at the University of Winnipeg for many years, he is currently deriving much satisfaction from his role as Housing Coordinator for the non-profit Spence Neighbourhood Association. He also volunteers as co-chair of the Board of Directors of Sunshine House. I take pride in my sons and the loving, responsible, grounded men they have become.

In 1995, restructuring at the NorthWest Company led to the end of Elaine's position, but that didn't slow her down. She started a small advertising company from our home and developed a loyal clientele. She volunteered in our sons' schools and was very active on the Board of the Gordon Bell PTA. In 2000 Elaine was diagnosed with breast cancer. This began the long arduous journey of navigating the ups and downs that cancer brings. Through it all, Elaine was strong, resilient, and courageous and she never complained. She mentored and supported others who were suffering. She continued to be very involved in the care of her aging mother and four aging aunts whose children lived elsewhere. We travelled and did all we could to enjoy our time together. I was heartbroken to lose her at the age of 60, in December 2006.

When I was 24, a friend and I started a small investment company. Over the years I have enjoyed this as an interesting sideline; today with online opportunities investing is a fun hobby that keeps me occupied. I enjoy many good friendships and keep in touch with family. While currently facing some health challenges, I have enjoyed many good times at the Rady Centre and involvement in community activities.