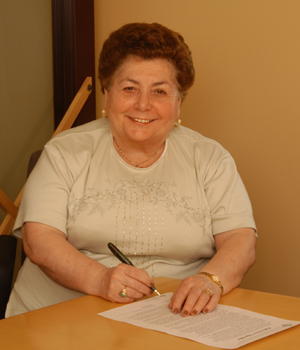 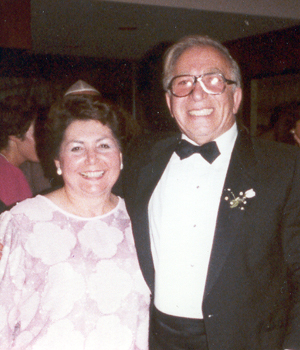 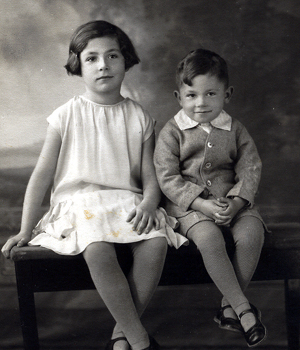 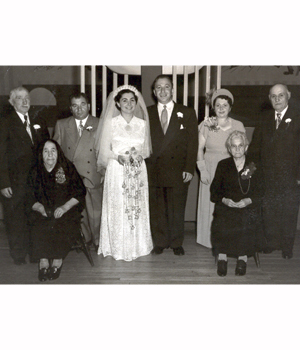 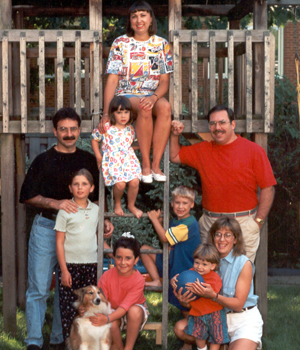 Molly's sons Ed (L) and Rob ® with their wives and children

That was Molly's mother's creed and the one by which Molly lives her life. Molly considers her life plentiful and even with all its ups and downs, there's nothing she would change.

Molly, born at St. Joseph Hospital in Winnipeg in 1926, was welcomed as the first child by her father, Goodman, who truly was a "good man" and her mother Esther Glow. Molly began her life on a dairy farm in rural Manitoba between Stony Mountain and Stonewall. Legitimately, she speaks of the 2.5 mile walk to and from school unless she was lucky enough to get a lift in the dairy delivery truck. Rather than feeling isolated, Molly has pleasant recollections of her relationships with both her maternal and paternal grandparents and her uncle Frank Glow who all resided in the vicinity.

During the war, when help on farms was at a premium and neighboring families couldn't attend High Holiday services in the city, Molly and her family was fortunate to be able to congregate at the Kaplan residence for services. Despite the lack of Jewish organizations in rural Manitoba, both Molly and her brother Sid always felt strongly about their Jewish identity, probably fostered by the daily use of "Yiddish" as the family language of choice.

With high school approaching, it was "boarding time" with family and friends, while Molly attended and eventually graduated from St. John's Tech. While living in Winnipeg, Molly held a variety of jobs. She started off working at Oretsky's, which allowed her to utilize her people skills. This beginning proved to be very useful to her as her life unfolded. Molly later on utilized her interpersonal skills and business savvy and operated three "Fruit and Nut" gift shops throughout the city.

In 1950, Winnipeg was ravaged by a huge flood and residents were fleeing the city. Soon after, Molly's parents sold their farm and moved to the city, settling at 508 Smithfield Avenue. Molly lived with her parents at that time and recalls that her mother spoke frequently about a "nice young man" who worked at a local grocery store.

Molly went on a blind date with a gentleman named "Ernie" that started at 10:00 p.m. and ended at 4:00 a.m. By the end of that first date, Molly and Ernie decided to get married. When Molly introduced Ernie to her parents, her mother exclaimed, "That's the young man from the grocery store!"

By the time of Ernie's death in 1989, Molly and Ernie had shared forty great years. Together, living on Lansdowne Avenue, they raised two sons, Robert and Eddie. Both boys now reside in Toronto with their wives, Susan and Beverley, and Molly and Ernie's five grandchildren. Molly is not a woman who gives flowery compliments, but she is very proud of her sons' professional accomplishments and even more so, of the type of husbands and fathers they have both become. Molly claims that Ernie showed them the way, and says that he would be ever so proud of them.

The Rosenblats were looking forward to retirement in the late 1980's, however Ernie became critically ill at that time and passed away. His family speaks of Ernie being robbed of life's greatest pleasures —time with his children and grandchildren.

Molly expresses the hope that the Winnipeg Jewish Community will remain a close-knit and supportive one that continues to value the important things in life. Molly feels proud that she is able to document her story and contribute to the well-being of our community.