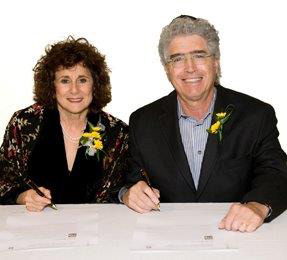 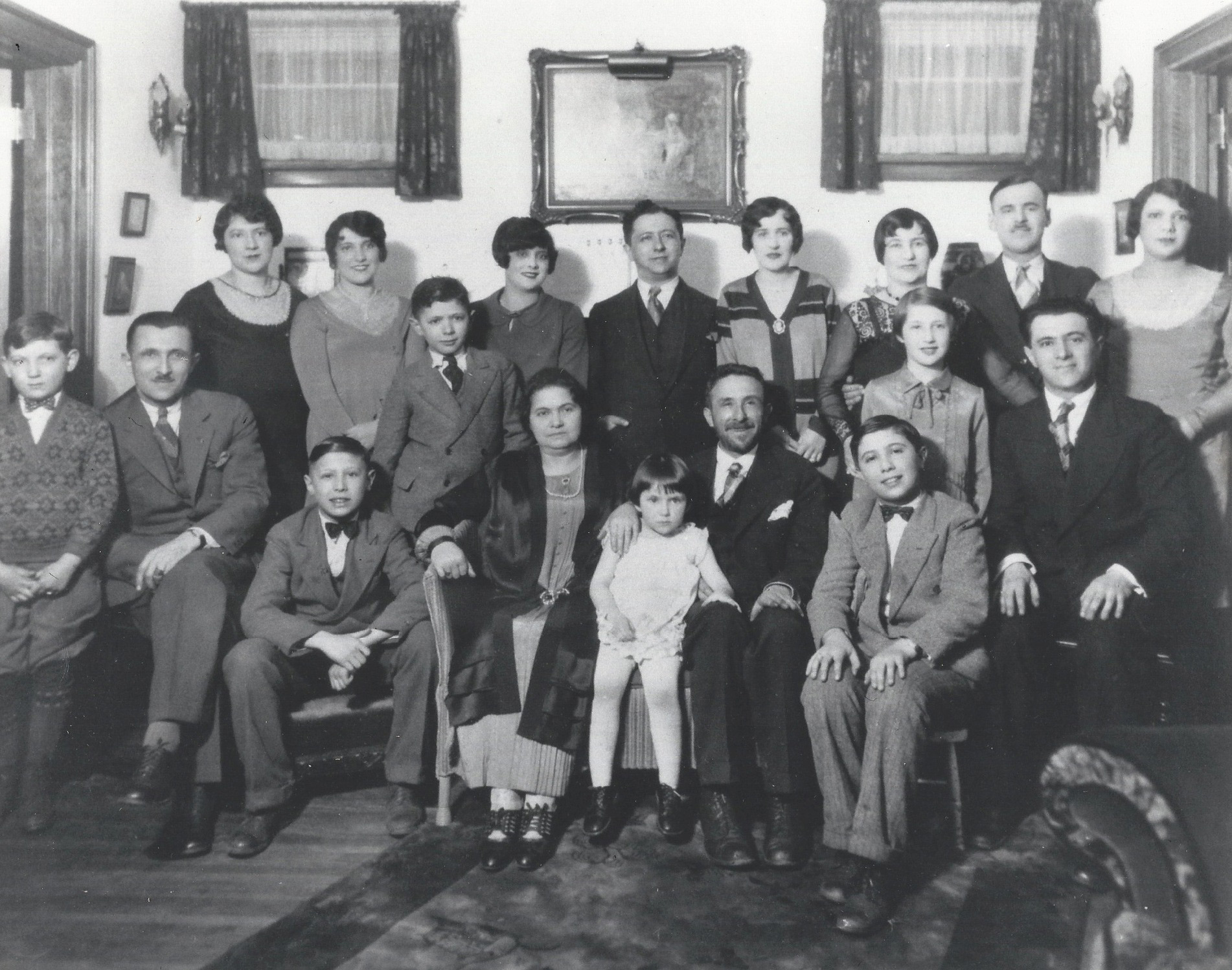 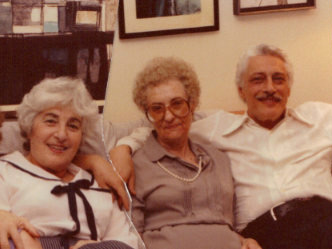 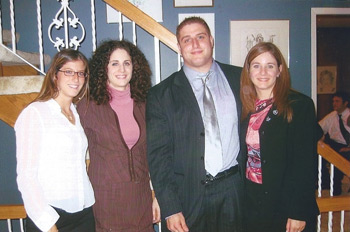 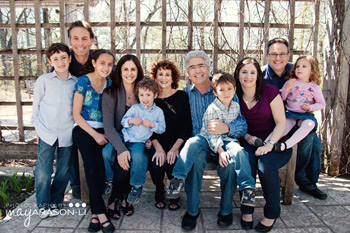 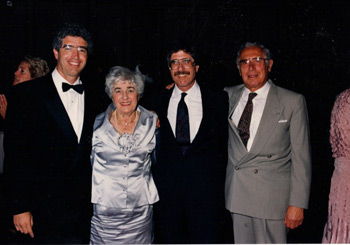 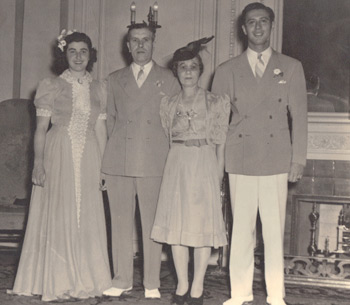 Mollie and Charlie Rusen's legacy is a strong sense of family pride, loyalty and devotion.

Charles David Rusen was born in Winnipeg on April 7, 1916, the eighth of nine surviving children of David and Faige (Shnier), and brother of Israel David (I.D.), Louis, Rose Halparin, Dena Sinaisky, Lillian Heft, Dorothy Tessler Corne, Clifford and Samuel. Charlie's parents immigrated to Winnipeg in 1903 from a shtetl called Pavelitch near Kiev. David Rusen became a fruit wholesaler in Winnipeg, establishing Rusen Fruit Company. David and Faige created a Jewish life rich with traditions, and David became a founding member of Beth Jacob Synagogue. Even after he lost his vision to diabetes, David continued to lead the services by memory.

At times, there were four generations living in their Hallet Street house - David Rusen's parents Baruch and Tova, his children and his grandson Monty Hall, Rose and Maurice Halparin's son. The house brimmed with family, but there was always room for guests. Charlie's father David greeted incoming trains regularly to search for new Jewish immigrants and bring them home for dinner. Their home was freilach with family, friends, and newcomers to Canada.

Charlie attended Norquay School and St. John's High School and the University of Manitoba. During those years, he developed his own storytelling skills. He charmed friends with his easy manner and good company. He had a positive disposition and a hearty and infectious laugh. He also distinguished himself as an athlete, particularly excelling in softball. He was one of the top pitchers in Western Canada and is in the Manitoba Softball Hall of Fame. He left home to study Dentistry at the University of Minnesota and the University of Alberta.

Charlie and Mollie Brenner's paths crossed during those university years.

Mollie Brenner was born in Winnipeg on August 1, 1916, daughter of Leon and Minnie (Rosenberg) and sister to Clara Diner and Sidney Brenner. Leon and Minnie immigrated to Canada from Romania around 1908, and Leon Brenner became a prominent merchant in the shoe business, owning Surprise Shoe Store Ltd. He was the true patriarch of the family and was known as a sweet but strong and kind man. Minnie was a devoted homemaker to her children and two sisters, Rose and Lona, who lived with Minnie and Leon. They were members of the Rosh Pina Synagogue, and Leon was a board member of the Jewish Orphanage.

Like Charlie, Mollie grew up in the north-end of Winnipeg, attending Luxton School and St. John's High School. Her parents infused her with strength, determination and self-confidence, traits that lasted throughout her life. She was an excellent student, a good listener, an eloquent speaker and a leader among her peers. She was interested and knowledgeable in art and antiques. She had a multitude of friends and was smart, vivacious and fun-loving. She loved to sing and at one time considered pursuing a singing career. Her parents encouraged her to go to the University of Manitoba where she joined a Jewish sorority and enjoyed all aspects of life on campus. She graduated with a degree in Home Economics.

On June 30, 1940, Charlie and Mollie were married. In 1945, their first child, Jack, was born. Because Charlie was serving overseas during World War II as a Captain in the Dental Corps, he did not meet his son until Jack was 14 months old.

When Charlie returned, he set up a dental practice on Redwood and Salter, and Mollie worked with him as his dental assistant. In 1948, Mollie and Charlie had a second son, David.

Mollie and Charlie moved to McAdam Avenue, east of Main, which was a unique neighborhood that forged friendships that lasted forever. They spent many summers at Gimli, Winnipeg Beach and Detroit Lakes. They had a wide circle of friends and enjoyed bridge, golf, and winters in Palm Springs.

Charlie was a founding member of the Faculty of Dentistry at the University of Manitoba. He was president of the Alpha Omega fraternity, the organization for Jewish dentists, and also served as president of the Manitoba Dental Association. He had a sterling reputation as an outstanding dentist, mentor and teacher. He was particularly known for his gentle touch, his warmth, generosity, and his ever-present sense of humor. He retired when he was 78 years old after 55 years of practice.

Mollie was a beautiful woman, forever remembered for her wonderful smile, excellent cooking, lively parties, engaging personality and her fierce loyalty to family and friends. Her energy, sensitivity, and compassion were without boundaries. She was the consummate Jewish wife, mother and grandmother. Friday night dinners with family and sometimes guests were wonderful evenings in their home.

Mollie and Charlie were constant nurturing forces in the lives of their family and friends. Their home was a hub for everyone, and they set a standard for family values and character traits that continue to serve as an inspiration to their children, grandchildren and great grandchildren. They were members of the Rosh Pina Synagogue, and they supported many charities as well as the Jewish community and Israel. Their home was always the center of celebration of Jewish holidays and family occasions. They were honest, humble and considerate and taught their children and grandchildren to be kind and hospitable by example. They will always be remembered with much love.