Miriam Maltz - in memory of Doris Vigder and Simon Kirch 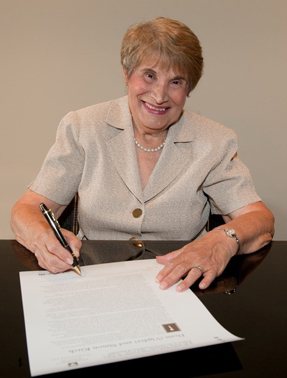 Miriam Maltz signs her story for the Endowment Book of Life, in memory of Doris and Simon Kirch 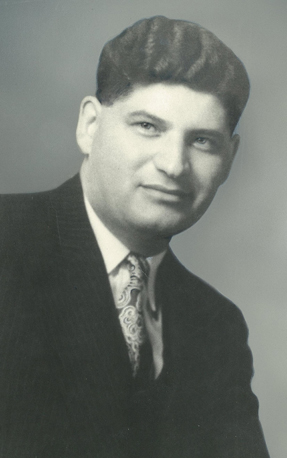 In a life that spanned almost a complete century, Doris Kirch relished the joys of family, friendship, community, books, travel, career and hobbies.

Doris was born in the Jewish colony of Lipton, Saskatchewan on August 16, 1912. Her father, Isaac Vigder, had immigrated to Canada from Romania as a young man, and her mother, Malke, was born in Regina. Doris has two older brothers, Joseph, and Benny. Benny died in childhood.

The Vigder family lived on a grain farm, and spoke both Yiddish and English at home. Doris' days were spent reading, playing with her dolls and attending the one room schoolhouse built by her grandfather. During the winter she traveled to and from school on a horse drawn sleigh, and in the spring and fall traveled back and forth on a horse drawn buggy.

After finishing high school, Doris completed one year of teacher training at the University of Saskatchewan and began her classroom career at the age of 19. During the ensuing years, she taught in several one room school houses in rural Saskatchewan and as far away as British Columbia.

Doris' life changed with the outbreak of World War II. She joined the Air Force and spent the next few years working in meteorological stations across Canada, collecting weather data from the wire services to determine if conditions were conductive to flying. At war's end she returned to university on a part-time basis, eventually receiving her Bachelor of Arts and Bachelor of Education degrees.

In 1956 Doris began teaching math and science at West Kildonan Collegiate in Winnipeg's Seven Oaks School Division. Here she was befriended by Miriam Maltz, a fellow staff member who introduced her to her bachelor uncle, Shim (also known as Simon or Shimshon) Kirch. Six years later, Doris' life changed again when she and Simon were married (both for the first time). She then left teaching to join her husband in his wholesale shoe business.

Simon Kirch was born in Poland, the youngest of five children born to Chaim and Miriam Kirch. As a very young man, he joined his older sister, Pearl, and his extended Nitikman/Warkov/Safeer families in Winkler, Manitoba. After a short time, he and Pearl moved to Winnipeg, where he pursued an education which focused primarily on his acquiring fluency in English.

In the 1930's Simon accepted the position of Hebrew-Judaic scholar/teacher in Fort William, Ontario. He became a very prominent member and leader in the Jewish community and the community at large. Also occupying Simon and Pearl's lives at this time was their effort to sponsor the remaining three Kirch children and their families still living in Poland as immigrants to Canada. They succeeded in rescuing only their brother, Reuven, and his family and in settling them in Fort William. Simon and Reuven opened a wholesale leather business and operated it together until Simon eventually returned to Winnipeg and established Reliable Shoes.

Simon was an intellectual, a linguist, a polished public speaker, and an avid reader, bowler and bridge player. Both he and Doris were committed Zionists and deeply devoted to family, community and local charities.

Simon passed away suddenly in August 1975, shortly before he was due to retire, and Doris continued running their business. Both before and after her eventual retirement, she indulged her love of diverse cultures and travel, visiting Israel, Australia, New Zealand, the Philippines, China, Thailand, Portugal, Scotland and a host of other countries. Blessed with good health, Doris savoured her independence, enjoyed the theatre and symphony, and took pleasure in her lifelong hobbies of needlework, reading, puzzle solving and walking well into her late nineties. Her final illness was mercifully short, and she had time to say her good-byes to her nieces and nephews. She passed peacefully on October 1, 2010.