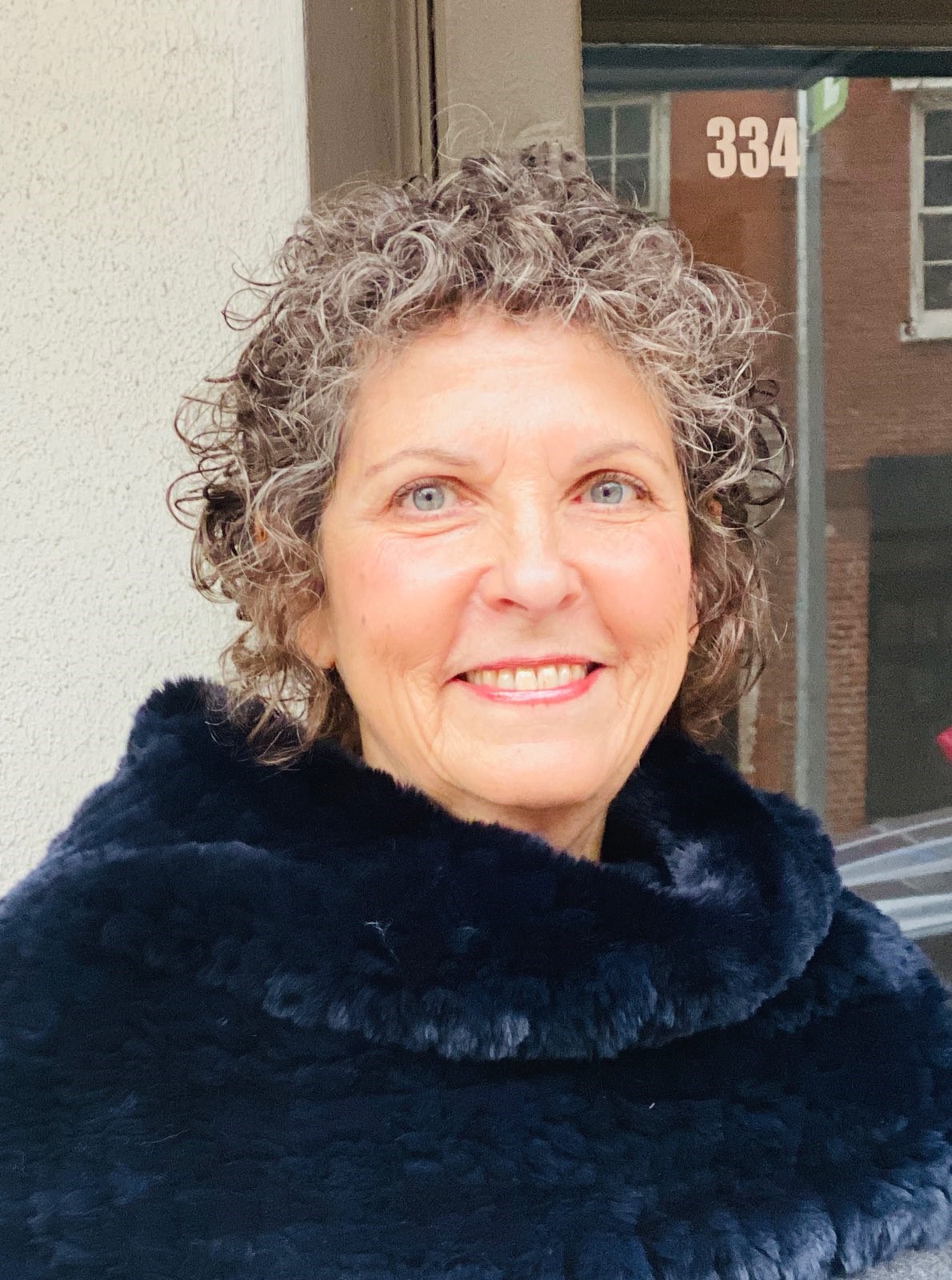 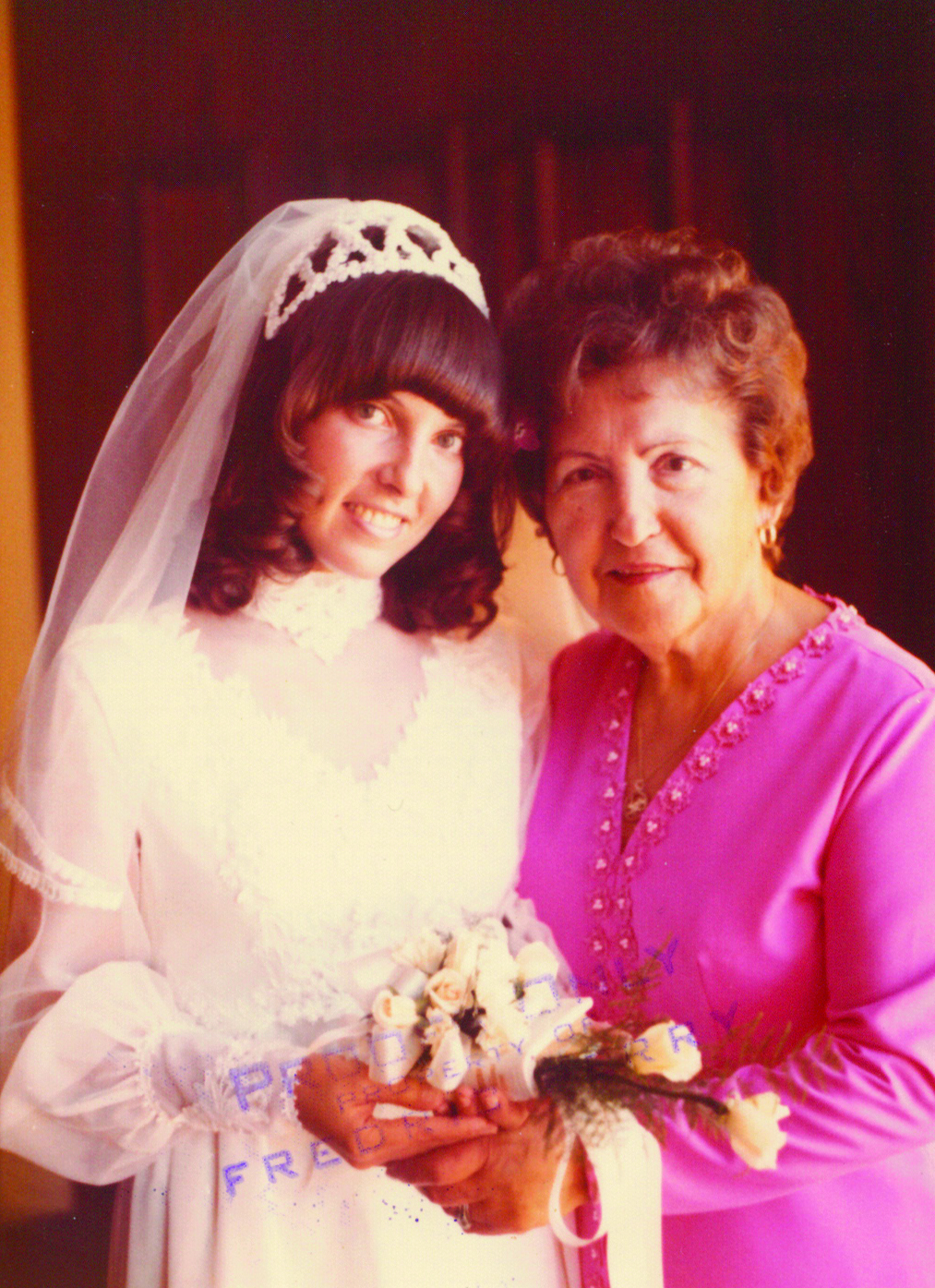 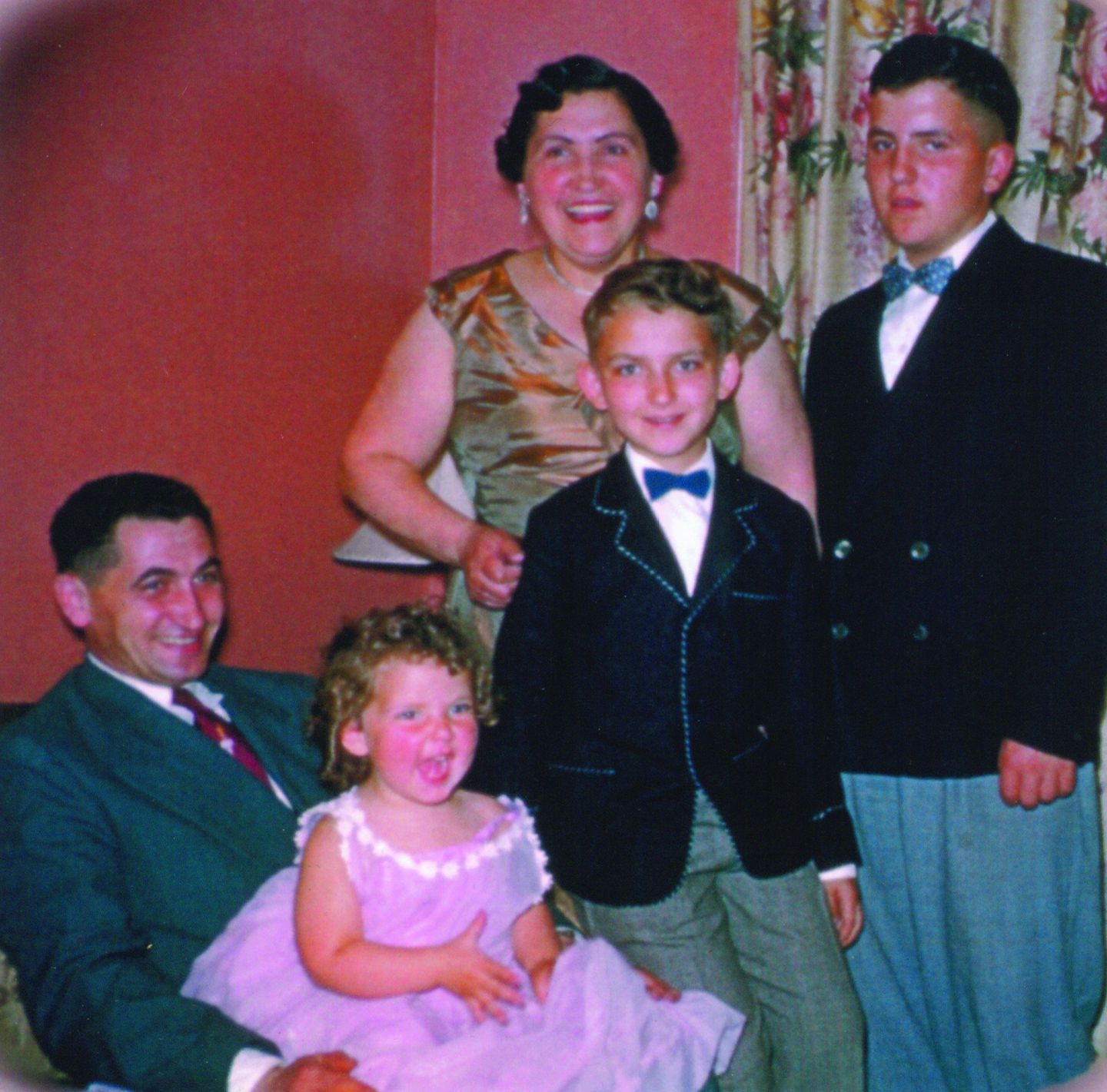 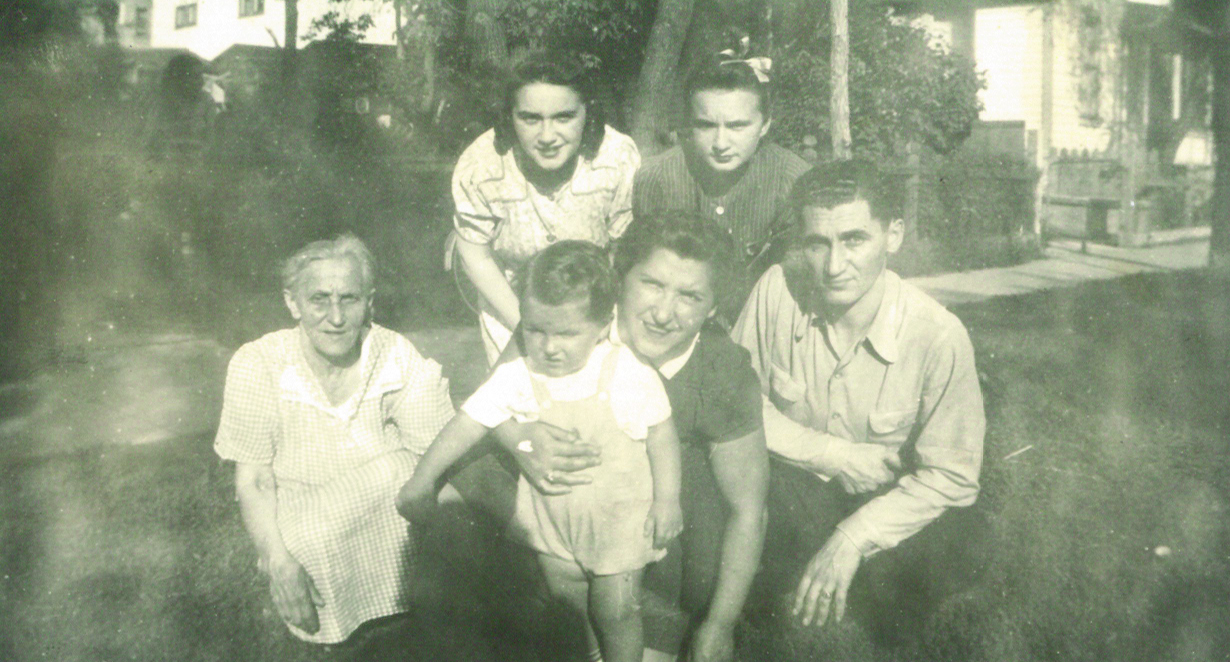 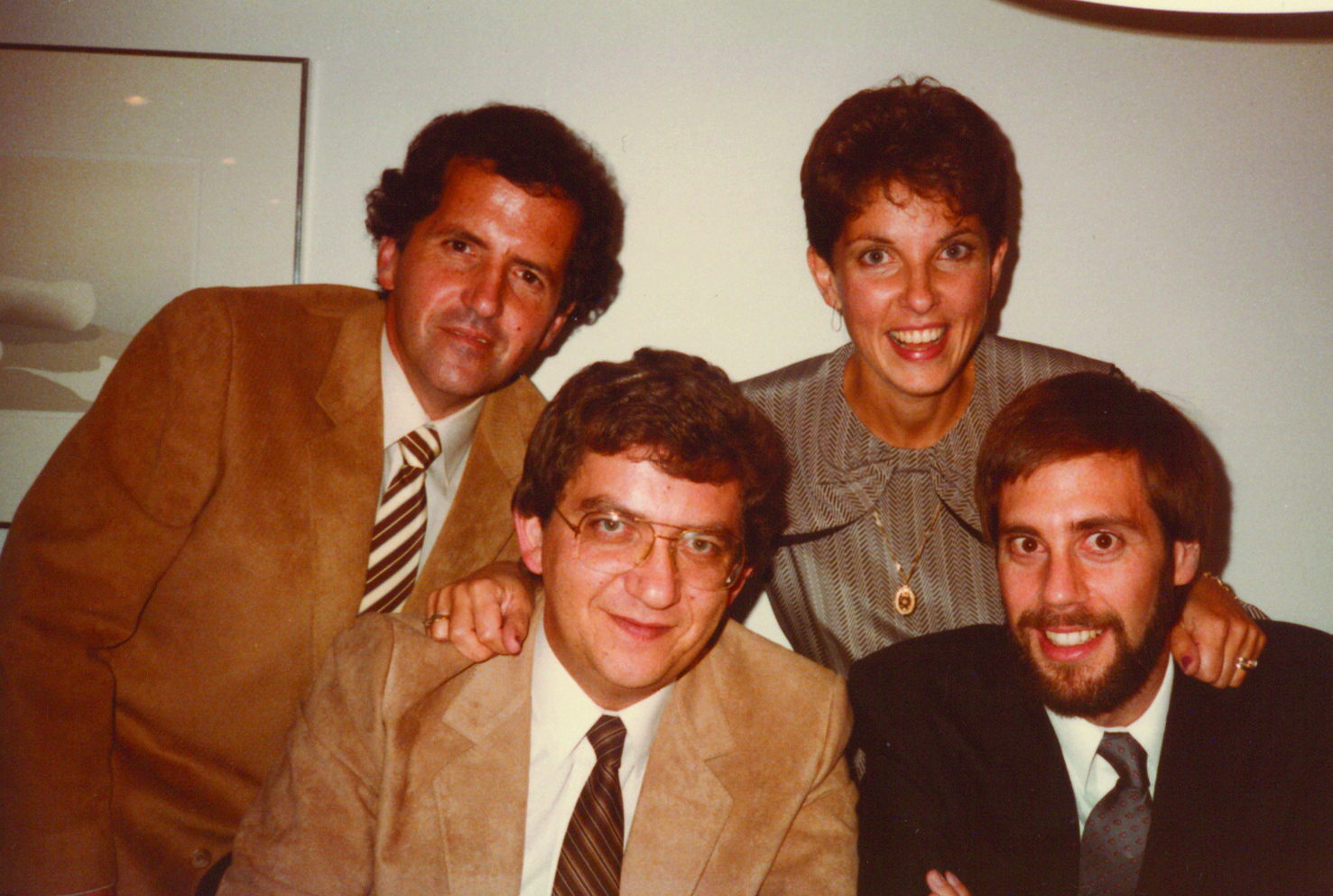 My parents were amazing, outgoing, incredibly hardworking people. They both came to Canada from Europe, met and married in Winnipeg and created a life of opportunity for my brothers and me. I chose to be part of the Book of Life to tell their story, especially how their influence shaped my life, my family and my community.

My father, Samuel Michael Kohn, was born in Russia. In 1912, when he was two years old, he came to Canada with his parents, Mayer Velvel and Leah Kohn, and three siblings. My dad spoke very little about his youth, but I know there were many hardships to overcome.

Mayer died very soon after settling in Winnipeg. To help support the family, my father left school by grade 9 or 10 to find work in the schmateh business, which was booming here at that time. From that moment on, he spent his entire life working. Years later, Leah died tragically while crossing Salter Street on her way to babysit my brother.

My mother, Shaindel Malmed, was born in Maciejow, Poland in 1912, the youngest of five children. Her mother died when she was very young. By age 15, most of her older siblings were married with young children of their own. Her older cousin, Shoilik Malmed, had already settled in Winnipeg and was able to arrange sponsorship for her to come to Canada. In 1928, completely alone, with five dollars in her pocket, she boarded the SS Estonia and set sail for the promise of a better future.

My mother was a talented sewer and came to Canada determined to find a job in the garment industry. She even backdated her passport to say she was 18, so she could get work!  She was hired as a finisher at Feldman, one of the largest garment factories in Winnipeg, where my father worked as a presser.

Even with little formal education, my mother was very smart and not afraid to stand up for herself. When factory workers went on strike for better wages, she joined right in. While attempting to stop others from crossing the picket line, she hit a cop!

After my parents were married, my father went into the grocery business. He owned at least two grocery stores on Manitoba Avenue before my parents bought the “big” store, Glenburn Grocery on Corydon Avenue. It was a good business… until supermarkets came along. In the early years, we lived behind the stores on Manitoba Avenue, so my mother could work there, while my dad also continued to work in the factory.

My parents and their friends, fellow grocers from Europe, created Associated Retail Grocers (ARG) to gain more buying power from wholesalers. ARG also became their social group. Saturday night poker and Tuesday night kalooki games were a very important part of my parents’ life. My father always joined the parties at midnight, after he closed the store.

Life was not easy, but they made it work. My dad worked seven days a week, leaving little time for much else. My mother also worked long hours at the store. She went through five pregnancies and had three children, Marvin, Sheldon and me.

Marvin was born in 1940. He was the “prince,” the apple of my parents’ eye, especially my mother’s. Five years later Sheldon came along. He was my father’s favourite. My brothers were best of friends. I always heard wonderful stories from them about growing up on the streets of the north end.

I did not arrive on the scene for another seven years. I was truly the baby of the family, teased mercilessly by my brothers and spoiled by my mother’s attention. I was the one who was taken on shopping sprees and had the singing and piano lessons. My mother would take me everywhere, including on a trip to Los Angeles to visit cousins who had moved there from Winnipeg.

When I was two years old, we moved to a house my parents built on McAdam Avenue, right next door to my mother’s sister, Rivka Shkolnik, the only one of her siblings to survive Europe. Rivka came to Winnipeg two years after my mother, and they had a very close relationship. They did everything together.  McAdam was the most multicultural street you could possibly imagine, with Black, Chinese, Ukrainian and Jewish families speaking multiple languages and practising different religions.

Ours quickly became the party house, especially because we were the first family on the street to have a television. Our mom would often come home from the store to a back hall full of shoes when all the kids came to watch tv in our basement rec room.

My dad was very outgoing with a real zest for life, but work took up most of his time and energy. My mother was the force of our family, a big lady with a personality to match. She was very social. She played cards and volunteered with the Chana Senesh Chapter of Pioneer Women, raising countless dollars for Israel. She worked the bazaars and would phone absolutely anyone to ask for money for what she truly believed was the Land of Milk and Honey.

One Saturday night each year, my mother would host a fundraising social at our house. She was a fabulous cook and would prepare an elaborate meal. All the furniture would be cleared out and our beds taken apart to make space for card tables in every room. Guests would pay $10 each to enjoy a beautiful dinner and spend the entire night playing poker. Everyone had a wonderful time, and all the proceeds went to Israel.

Our father passed away suddenly, right after Shavuot in 1970. My mother died in 1975 from a brain tumor. They would be thrilled to know their legacy now includes six grandchildren and 10 great grandchildren.

My parents were very proud of our accomplishments. Marvin became a dentist and married Penny Dozar. Their daughter, Karen, was the first grandchild, whom my father lived to enjoy. Their son Sammy, named for my dad, was born one month after my father died.  Sheldon was a lawyer. He married Sheila Ornstein, and together they had Steven and Andrea. The Kohn grandchildren are all grown now, with careers and families of their own.

After high school I studied dental hygiene, which, of course, led to my “Mrs” when I met Danny Bronstein at the dental school. Danny and I were married at B’nay Abraham Synagogue in 1973. Now divorced, we have two wonderful children. Shaun lives in Montreal with his wife and their daughter, Suki. Lauren lives in Winnipeg with her husband and three children. Oren and Raya attend Gray Academy. Shael will too when he is old enough.

We also had a very solid Jewish foundation growing up. As a child, I attended Talmud Torah and Joseph Wolinsky Collegiate. I spent my summers at Camp Massad and took part in B’nai Brith Girls and Young Judea. I even travelled to Israel with the Shaarey Zedek Choir to sing at the Zimriyah festival.

Out of a club at Talmud Torah, Sarah Sommer picked eight girls, including me, who became the original dancers in the Sarah Sommer Chai Folk Ensemble. Chai became a very big part of my life, especially when the group expanded to include singers. Eventually I became the vocal director, assisting my cousin Shirley Goltsman who was the music director.

I continued to pursue my passion for music, performing at the old Hollow Mug, Rainbow Stage and with Winnipeg Jewish Theatre. Eventually I went back to school and made it my career, teaching music and drama at Ramah Hebrew School, Talmud Torah and Gray Academy of Jewish Education.

Throughout my life, it has also been very important to me to carry on my mother’s legacy of giving. I’ve volunteered with Jewish Federation of Winnipeg, which honoured me with a Young Leadership Award, as well as Winnipeg Jewish Theatre.

Several year ago, I helped bring Soup Sisters to Winnipeg. This amazing initiative brings volunteers together to make hundreds of litres of freshly cooked soup for Willow Place, a first-stage shelter that supports women and their children who are experiencing domestic violence.

My parents instilled in my brothers and me a strong sense of family and loyalty, and we remained very close throughout our lives. Sheldon died suddenly in 1983, at the age of 38. Marvin passed away in 2019 after a hard-fought battle with cancer. Now it’s up to me to be the voice of the Kohn family.

It was so important to my parents to maintain a vibrant Jewish community in Winnipeg, rich in Jewish life and culture, as well as a strong and enduring State of Israel. Through my commitment to the Book of Life, I want to carry that legacy forward. I know my mother, my father and my brothers would be very proud.