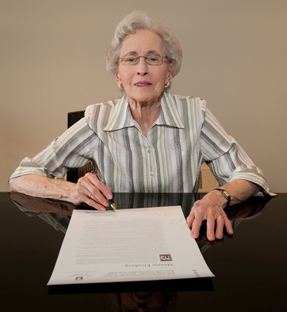 Miriam Erenberg signs her story for the Endowment Book of Life 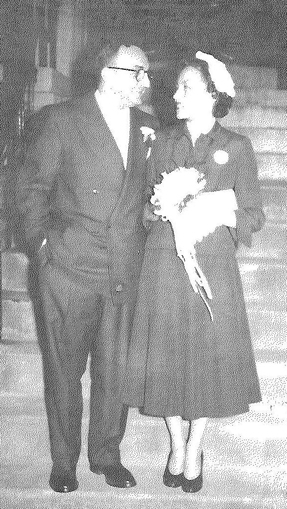 Miriam and Morris on their wedding day

Miriam Block was born in Montreal, Canada on January 26, 1929. She was the youngest of seven children born to parents Rivkah and Yonah. Miriam's siblings were Anne, Ben, Faye, Rose, Hy and Ruth. The family grew up in a modest Montreal neighbourhood near downtown. Their home was walking distance from the synagogue — important to an orthodox Jewish family that was shomer shabbas. The house was a duplex which they shared with Yonah's brother Izzy who was married to Rivkah's sister Malkah (two brothers had married two sisters). Malkah would often sit with her sister, Rivkah, to read the dramas and love stories printed in the Yiddish newspaper, The Forwards.

Yonah and Rivkah were young adults when they emigrated from Lithuania to Montreal in the early 1900s. Yonah owned two businesses — one manufactured fabric bindings while the other produced sponges and pre-shrunk materials. Miriam and her sisters occasionally worked in their father's businesses, which her brother, Ben, took over when Yonah died in 1942 at age 56. Miriam's mother, Rivkah, passed away in 1961 at the age of 67.

Miriam's fondest memories are of the summers she spent at the family's Cape Cod style cottage along the shores of Trout Lake in the Laurentians north of Montreal.

"We went to the country every summer," she recalls. "We used to have bonfires on the beach. We had our own pier and our own beachfront, and a boat that we used to row. I remember my sister Ruth would take me way out in the boat. It was so deep. I would jump in and swim back to shore while she followed along."

As a child, and then as a teenager and young adult, Miriam was an avid swimmer who mastered several techniques including breast stroke, front crawl and butterfly. She was also learning how to dive but didn't pursue it seriously as her university studies took priority. After graduating from the Girls Section of Montreal High School, Miriam went on to achieve a Bachelor of Arts degree from McGill University in 1949.

Miriam also loved to downhill ski in the winter time mostly near Montreal and sometimes in the Laurentians.

In 1952, the 23-year-old Miriam started dating Morris Erenberg, a 28-year-old medical student from Winnipeg who was doing his residency at Montreal's Jewish General Hospital. A year later, in 1953, they were married in Montreal and then moved to Winnipeg. At first, they lived with Morris' mother and father (Sarah and Max Erenberg) on Charles Street in Winnipeg's north end and soon after moved into a duplex on nearby Bannerman Avenue. It was here they started their family with the birth of their son, Yale, in August of 1954, and then their daughter, Brina, in December of 1955.

The young family moved to the south end of Winnipeg in 1956 where they built a bungalow on the corner of Ash Street and Grant Avenue. Their second daughter, Galla, was born in 1957, their second son, David, in 1959, followed by two more boys, Reuven in 1962, and Noah in 1964. Six children under the age of ten made for a busy and active household.

"It was exhausting," says Miriam. "There was rarely a dull moment," she laughs. "But I was always there for my kids no matter what they needed."

With both Miriam and Morris coming from orthodox Jewish upbringings, it was important for them to maintain a traditional Jewish home with an emphasis on Jewish values and education. Miriam was a member of Hadassah, Pioneer Women and Friends of Ben Gurion University.

After living in Winnipeg's south end for 14 years, Miriam and Morris moved back to the north side of the city in 1970 where they built another house, this one in Winnipeg's newest area at the time — Parkway Square in Garden City. The large, multi-level home they designed was situated on a quiet bay called Tanoak Park Drive.

"It was such a beautiful home on a lovely street," says Miriam. "We planned it ourselves. The design was so popular that many other builders copied our layout."

Once all her children were in school full time, Miriam worked for several years as the receptionist in her husband Morris' family doctor practice. Miriam loved her work as a physician's secretary and still continued to maintain a home for her growing family.

"Morry was a very popular doctor and very busy so I was busy too," she says. "The work was very pleasant and challenging. You have to start good relations right at the front of the office upon peoples' arrival. I made sure that I had the right attitude by trying to please patients as much as possible. They weren't disappointed. They loved having Morry as their doctor and I tried my best to make their visit to him a positive one."

Once her children were grown and on their own, Miriam and Morris moved back to the south end of Winnipeg in 1999 to a bungalow on Hosmer Street. A decade later, Morris' declining health forced him into a personal care home at which time Miriam decided to move to the Shaftesbury Retirement Residence where she has lived since 2009.

Miriam was extremely proud of her scholarly and accomplished husband, Morris. "He was an intellectual, plus, plus, plus," she says with conviction. Morris passed away in December of 2010 at the age of 87.

Miriam is also enormously proud of her children and grandchildren. "My proudest moments were when my children succeeded in their lives," she says beaming with emotion. "Grandchildren are one of the best things in my life," she continues, "and I am so lucky to have eight beautiful grandchildren and I am looking forward to having great-grandchildren."

Miriam sums up her life motto as follows:

"To be kind and helpful to others especially those in need. And to also be a very devoted and caring parent and wife."