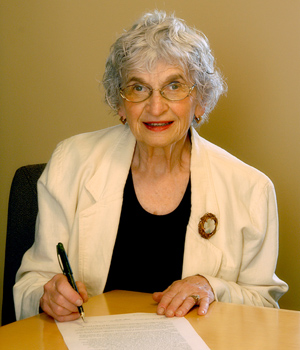 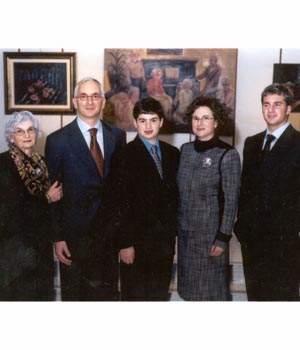 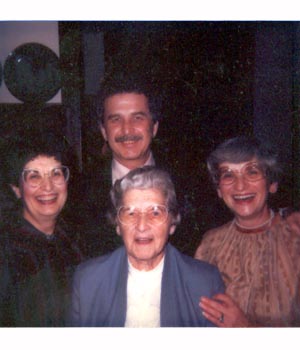 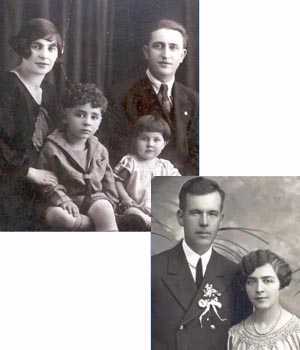 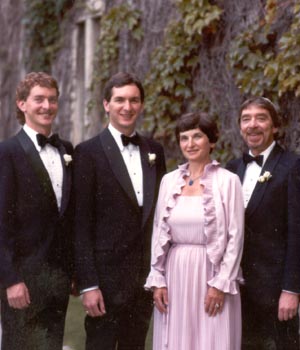 Miggie and Walter ® with sons Yale and Jonathan

This fund was established by Miriam, generally known as Miggie Lampe, to mark the B'nai Mitzvah of her grandsons, William and James Lampe of Toronto. The purpose of telling this story is to document and provide Miggie and Walter's grandsons with a sense of their family's roots. In addition to providing this historical family perspective, the fund will support projects for children and families in the Winnipeg Jewish community.

William's and James' great-grandparents (on the Winnipeg side) were Rose (Packer) and Yasha Coop (the parents of Miggie), and Lenore (Schulbaum) and William Lampe, (the parents of Walter). Rose, Yasha, Lenore and William came to Winnipeg in the 1920's from the Ukraine, Romania, Galicia and Germany, respectively.

Yasha established a sportswear factory, but his passion was his participation in the Yiddish theatre. His early and untimely accidental death in 1936 left Rose with four children to support and raise, which she did by becoming a grocer, working 18 hour days, seven days a week in one of the city's poorer north end neighbourhoods, while the family lived behind the store. On the Lampe side, William struggled through the depression, working for the City of Winnipeg Public Works Department where he eventually became a supervisor. Many Jewish youth were taken under his wing for summer jobs, which enabled them to pursue their university education. Lenore, a master of languages, worked as store interpreter for the T. Eaton Co. She was invited to join the federal government in Ottawa, but could not conceive of moving her family from Winnipeg. She was an active campaigner for the CCF party and later became an advocate for Chinese immigrants in Winnipeg. William and Lenore were pivotal in the formation of the Luxton Royals Soccer Club, which provided competitive access, in a previously exclusionary area, to Jewish and gentile north end boys, where their two sons, Walter and Norman, distinguished themselves.

Miggie and Walter, both born in 1930, met at St. Johns High, where they excelled academically, winning university scholarships. Walter, a natural leader and athlete, was elected school president and was awarded the Governor General's Medal. Miggie and Walter were married in1952 at the I.L. Peretz School. The Peretz School, which Miggie and her siblings, Nathan, Lucy and Issie attended, held special significance for the Coop family, for the fine parochial education it provided, instilling in its students self-awareness and a commitment to the Jewish community and to the peoples of the world. Miggie obtained a Master of Social Work degree from the University of Manitoba. Her full working career encompassed numerous areas of social service and social planning. Walter obtained a PhD in Applied Social Science from Case Western Reserve University. His career included program directorships in the Jewish community in Winnipeg and Vancouver and a full professorship at the University of Manitoba. Walter combined his professional endeavours with an active career as a creative visual artist.

Miggie and Walter were blessed with two sons, Jonathan (1956) and Yale (1958). Jonathan obtained an L.L.B. from the University of Toronto, following graduation from Yale and Oxford (Rhodes scholar) and practices as a corporate/securities lawyer in Toronto. Yale obtained degrees in Business Administration from the Universities of Manitoba and Calgary and worked in the oil industry.

Yale died in 1991, an early victim of AIDS. Walter and Miggie established a fund with the Winnipeg Foundation and a scholarship at the University of Manitoba in memory of his life and in celebration of his achievements.

Jonathan married Dana Geller of Toronto and they too have two sons, William (1989) and James (1991). Both boys have a keen interest in academics and athletics. They are being raised in an environment filled with a sense of community responsibility and sharing, through personal mitzvot and tzedakah.

Walter died in 1999. Miggie continues to live in Winnipeg, enjoying retirement, daily workouts at the Rady Centre, a variety of volunteer activities and the company of friends.