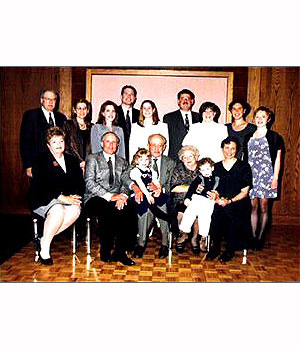 Mira Buchwald with her family

My grandparents, Rachel Leah and Mayer David Hamovich and Michlia and Jacob Freed, arrived in Winnipeg from Romania and Russia respectively in the early 1900's. Both of my parents, Ralph and Clara Hamovich, were born in Winnipeg. My brother, sister and I grew up on Powers Street and Seven Oaks Avenue in Winnipeg's North End. I attended Peretz School to the end of Grade 7, went on to Victory School and West Kildonan Collegiate, and then to the Mount Carmel Clinic where I trained to become an X-ray technician.

As a child and young adult my life revolved around a rich Jewish family life. I have vivid and fond memories of holiday celebrations, family seders, of a baba who was always there for me, and of parents who worked diligently for their community and Israel through Brandeis Lodge, Hadassah, and the Zionist Organization. My father was also a professional fund-raiser in the Jewish community for over 40 years. Parochial School re-enforced and expanded the Jewishness practised at home. I was involved in Young Judea, BBYO, and YMHA activities.

On June 11, 1961, I married Martin Buchwald and we have two accomplished and fine children, Robyn (Jeffrey Lieberman) and Jonathan (Susan Schweid). Both children graduated from Joseph Wolinsky Collegiate and obtained degrees from the University of Manitoba, both were dancers with the Chai Folk Ensemble, and both are active volunteers in the community. Robyn and Jeff have given us two wonderful grandchildren, Amy and Joshua.

My volunteer work started as a direct influence of my parents. For the past 30 years I have been active in the Women's Division of CJA, having served as a Vice President, Chairman of various categories, and as Co-Chair (three times) of Super Sunday. I am a life member of Hadassah Wizo and was very active in the Sharon & Becky Sokolov chapters, and was a member of Winnipeg Jewish Community Council's Board for 7 years, working on numerous committees. In 1975, I was honored to receive the WJCC Young Leadership Award, and was proud when my son-in-law, Jeff, received the same award in 1998. For the past 15 years I have worked with my husband in our Priority Management business and was recognized with him as Corporate Citizen of the Year in 1997 by the company.

I would like to be remembered as a person devoted to my family and my parents and a strong supporter of local and Israeli causes. I hope that my children and grandchildren will continue to thrive in a Jewish environment made stronger and more vibrant with the help of endowments to the Jewish Foundation. I see the new Jewish Community Campus continuing to be the focal point for communal life, and a strong future for our children and grandchildren to continue the proud traditions started by their parents and grandparents.