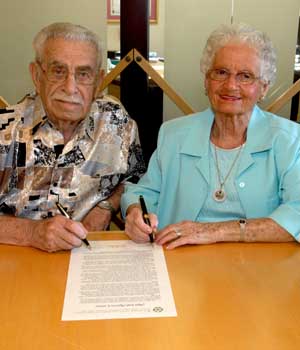 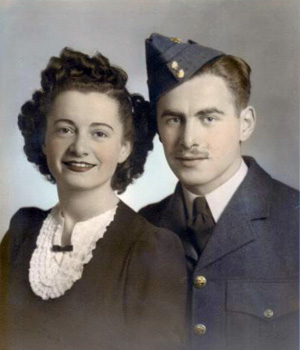 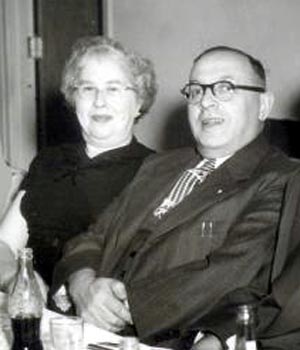 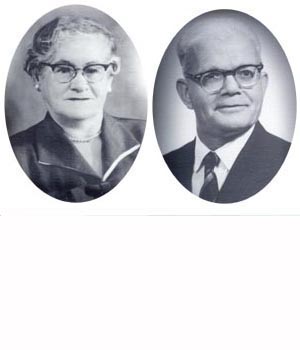 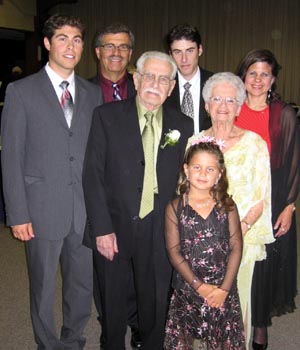 On August 14, 2006, Min and Morris Cantor celebrated a milestone wedding anniversary at a beautiful Havdalah service and reception organized by their children. Surrounded by dozens of family members and friends congratulating them, toasting them and wishing them well, Min and Morris were acutely aware of how fortunate they have been. They know that not everyone gets to celebrate 65 years of marriage!

Min (Minnie) was born in Poland in 1920 and immigrated to Winnipeg with her parents, Shifra and Gabriel Stern, and siblings William (Bill), Sara and Max in 1924. The children all became Canadian citizens under their parents' name. Gabriel operated the second hand store, Crawford Office Equipment, at 330 Main Street, and, like his wife, was very involved in the community. He served as president of the Voliner Society and the Hebrew Sick Benefit for many years, and in fact, died suddenly one day as he was about to address the crowd at a Hebrew Sick Benefit Dinner.

Min grew up on Pritchard Avenue, attended the I.L. Peretz School for kindergarten and the Talmud Torah, before graduating from St. John's High School. After graduation she took a six month business course at Success Business College and began working at her father's store, where her brother Bill worked as well. Her sister Sara became a secretary and moved to Ottawa during the war years to work for the federal government. She too eventually returned to Winnipeg to work in the family business.

In 1939 Min's youngest brother Max lied about his age and joined the Air Force. He became a pilot and was lost over Germany and never located. This was very difficult on the family. Decades later the Manitoba government named the Stern River in Northern Manitoba in his memory.

Morris also served in the Air Force during the war, signing up in 1942 a year after he and Min had married. Morris was the son of Harry and Sara Cantor and a brother to Ruth and Eddie. His paternal grandparents, Aida and David, were married for 70 years and were well known in the community. David was a Rabbi, mohel and shochet who brought 650 people from Russia to Canada in his lifetime. He and Aida lived with their seven children, and sometimes their in-laws and grandchildren, at 494 College Avenue in a mansion known as the 'castle.' Morris recalls many fascinating stories about life at the 'castle' where he lived with his family for a few years as a young boy.

After high school Morris attended university and then began working with his father in the sheet metal business. Harry was the only one of his siblings who did not become a professional because, as the eldest, he was expected to help put the younger ones through school.

After the war Morris worked for London Life for four years, and then as a salesman at Gensers Furniture and later at the Penthouse. Min stayed at home for the first 20 years of their marriage — first on St. Anthony and then on Burrin Avenue - caring for their sons, Sheldon and Ron, and volunteering on behalf of Pioneer Women.

In 1963 Morris became ill, prompting Min to write a government eligibility exam and begin a 20 year career as a secretary for the Winnipeg School Division #1. She worked for 10 years at Victoria Albert School, five years at Fort Rouge School and another five years at various schools in the division. Min loved working, and especially enjoyed the opportunity it gave her to meet different people and be surrounded by youngsters all of the time.

In 1986 both Min and Morris retired and moved to Gimli to live, an experience that brought them great pleasure. They also were fortunate to spend 13 winters in Fort Lauderdale, Florida, where they enjoyed bowling, golfing and spending time with their friends. Min and Morris moved from Gimli back to Winnipeg in 1996. A year later they welcomed Ron's wife, Gail Frankel, into their lives, and cherish their relationship with her and their granddaughter Marlee. They are also very proud of Ron's two sons, Elliott and Everett.

Min and Morris now live a quiet but independent lifestyle, still getting around on their own, socializing and keeping busy. They are proud of the Jewish community of Winnipeg and are pleased to be able to contribute to its continued success through the Endowment Book of Life.