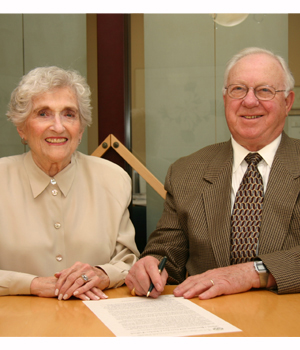 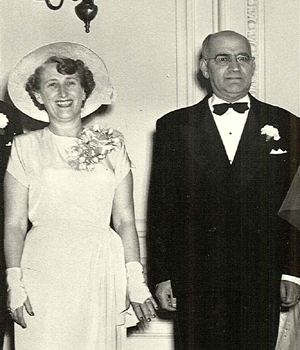 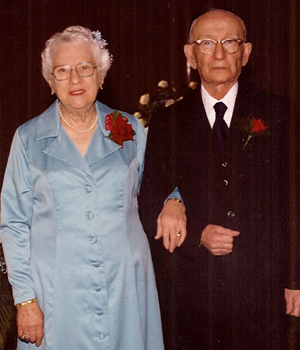 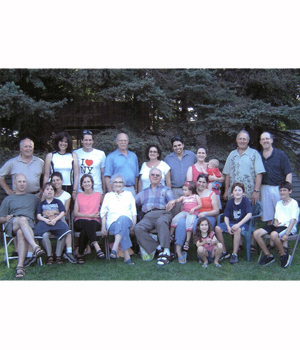 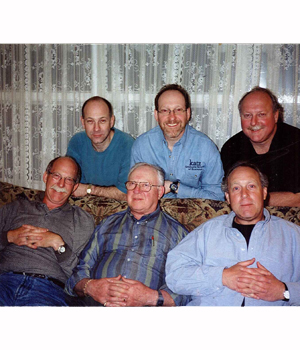 Mimi (Miriam) and Gordon are appreciative of the good fortune in their lives. They have been married for 56 years; their five sons are all married and successful; and they have 12 grandchildren and two great-grandchildren.

Both Mimi's and Gordon's parents were emigrants from Belarus and the Ukraine. Mimi's father, Joseph (Alter) Bursten, arrived in Winnipeg with his father when he was 14 years old. Her mother, Ann Levine, arrived as a young woman of 20, intending only to visit family she had in Canada before returning to the Old Country. However, she happened to meet Joseph while she was in Edmonton - where he was attending dental college - and decided to remain in Canada and marry him. They moved to Winnipeg when he completed his studies.

Mimi grew up in the north end on Selkirk, Burrows, Mountain and eventually Smithfield. She recalls a fun-filled and secure childhood with her sister Sharon (Sookie) Katz, who now lives in Kenora, and with her brothers, Raymond who passed away at the age of 16 and Les who passed away 10 years ago. She attended Sholom Aleichem night school, Machray and St. John's, studied music, and spent time with friends and a large extended family on her father's side.

Mimi married Gordon in 1950 when she was 19 and became a mother to five sons: Marshall, Michael, Raymond, Joseph and Avrum, born between 1951 and 1963. While her sons and her home were her primary focus and left little time for other pursuits, Mimi managed to do some volunteer work, serving as president of the Ramah School PTA and occasionally working on behalf of Hadassah.

Gordon too volunteered on behalf of local Jewish organizations including Pioneer Women and B'nai Brith. He served as president of the Ramah Hebrew School and sat on the board of the Shaarey Zedek Synagogue for ten years. He also was active with the River Heights Community Centre and the Prison Chaplain Advisory Board. The Law Society of Manitoba has been an integral part of Gordon's life. He graduated from the University of Manitoba Law School in 1952 and has carried on a general law practice, primarily in the areas of corporate, estate and business, ever since.

It was extremely important to Gordon's parents, Sam and Sluva, that all of their children receive a good education. Sam and Sluva had immigrated to Canada in 1927 with their two eldest children Myra and Mischa. Settling first in Winnipeg — where Gordon was born in 1929 - they moved to Bethany, Manitoba — where their two youngest children, Harvey and Cecilia, were born. Sluva found life in Bethany very different from what she was used to, but she approached it with a positive attitude and a pioneering spirit. She helped Sam operate a general store and when he expanded into the fur trade, the cattle business and eventually farming, she managed the store on her own. Sluva and the younger children returned to Winnipeg in 1944 for educational opportunities, while Sam continued to farm and to carry on in the cattle business until the early seventies, joining his family in Winnipeg when he retired.

Ultimately all of Sam and Sluva's children settled in Winnipeg and raised their families here. This changed however with the next generation. While Mimi and Gordon are thrilled that Raymond, his wife Maureen and children Richard and Adam; and Joey, his wife Laura and children Samantha, Danielle and Liam remain in Winnipeg, their three other sons have moved away. Michael lives with his wife Ronni and son Jonas in Kelowna, while their other son Jeremy lives in Calgary. Marshall and his wife Judy live in Palm Springs, while their daughters Lea and Marni, and Marni's husband Jason and daughters Sarah and Sammi live in San Diego. Avrum lives in Philadelphia with his wife Tracy and children Samuel, Benjamin and Alyssa.

Mimi and Gordon believe that this exodus of our young people is the biggest challenge that the local community faces. While they agree that the campus is a great facility that has helped to regenerate and unite the community, they suggest that more needs to be done to increase and strengthen the Winnipeg Jewish community. They hope that their participation in the Endowment Book of Life will help to do so.