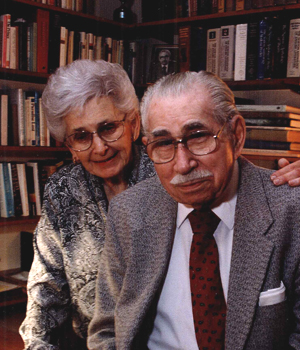 As president of the Jewish Historical Society of Western Canada for almost two decades, the late Harry Gutkin left his mark on his world, both the Jewish community in which he was rooted and the wider society which was his abiding concern.

An all-embracing sense of social responsibility and a drive for perfection marked his long, multi-faceted career. Born in Winnipeg in 1915, he studied with Lemoine Fitzgerald and then at the Art Institute of Chicago, and became a published magazine illustrator and a political cartoonist before he was twenty. Then, having been rejected for military service in World War II, he turned his energy, in partnership with David Simkin, to the founding of Contemporary Publishers, which issued a number of paperbacks on social subjects. His skill in the graphic arts and his talent for management led in 1948 to the founding of the advertising art and photography firm of Phillips-Gutkin and Associates, in partnership with John Phillips. This intensely creative young company won a number of awards, serving both national and international clients; among these, Canada Post commissioned a stamp honoring Lord Selkirk's Red River Settlement.

Four years later, PGA Films came into being, with the cooperative movement one of its chief clients. Several documentaries written and directed by Harry Gutkin dramatized the social significance of the movement. Television exploded on the scene shortly after, and PGA Films moved into animation, producing some of the commercials the new industry demanded, again under his tireless direction. The firm is now recognized as one of the pioneers of animation in Canada.

However, for all his achievements in business and the graphic arts, Harry's true fulfillment lay in the community service that was his lifelong preoccupation. Accepting an invitation by the then newly-constituted Jewish Historical Society of Western Canada (now the Jewish Heritage Centre), he marshaled the enthusiasm of dozens of people to produce Journey Into Our Heritage, a definitive exhibit on the Western Canadian Jewish community. This exhibit, which provided him with a unique opportunity to draw on his artistic as well as his organizational and leadership skills, was a major attraction for six months in 1976 at the Manitoba Museum of Man and Nature. Journey subsequently went on display as a traveling exhibit in museums across Canada, and finally in the Museum of the Diaspora in Israel.

Nineteen years of devoted service as president of the Jewish Historical Society followed, from 1977 to 1996. Under Harry's leadership several exhibits on local Jewish history were mounted, notably the much-admired Selkirk Avenue Revisited, recapturing that colorful hub of the early Winnipeg Jewish community. Other exhibits of Jewish and general interest were imported, a program of lectures was maintained, and two films were produced. A rich archive of historical documents and artifacts remains a continuing resource today for popular and scholarly research, as does the invaluable Genealogical Institute.

Reaching out as always to the wider community in which he lived and prospered, Harry Gutkin played a leading role in organizing the uniquely successful conference Building Bridges, held at the University of Manitoba in August of 2001. The event, which attracted academics and lay people from across Canada and the United States as well as Israel, brought together for the first time Jews, Mennonites, and Ukrainians, all part of Manitoba's rich immigrant heritage, to discuss their differences and their common experience. In 1997 the Government of Manitoba awarded Harry Gutkin the Prix Manitoba — Heritage for volunteer service to the community.

While his professional training had centred on the graphic arts, he had become an accomplished lay historian, and his absorption in the written and spoken word had found deeply satisfying expression. He was in constant demand as a lecturer on the Jewish community, and, following the success of the 1976 exhibit, he drew on its material to publish in 1980 the full-length book version of Journey Into Our Heritage, recording for posterity the people and places of the Jewish community from Manitoba to the west coast, their background and their role in the country's development. Recognizing the achievement, the Manitoba Historical Society awarded the book its Margaret McWilliams Medal. The publishing house of Nelson Canada then commissioned The Jewish Canadians for its Multicultural Canada Series for junior high schools.

For more than half a century, an unshakably devoted marriage provided the foundation on which two busy lives were built. Mildred Gutkin, Harry's wife, taught English literature at the University of Manitoba for over thirty years, becoming associate professor and assistant head, one of the earliest in her generation of Jewish-Canadian women to achieve an academic career. A close collaboration with Harry produced two further books. The Worst of Times, The Best of Times: Growing Up in Winnipeg's North End (1987) offered an incisive study of that formative enclave during the middle decades of the twentieth century; Profiles in Dissent (1997) mirrored the human face of the 1919 Winnipeg General Strike in a series of biographical sketches of its leaders. These books as well were awarded the Margaret McWilliams Medal by the Manitoba Historical Society.

Harry's partnership with his wife on these books was a reflection of the intimate links in his life between his family and his community, two aspects of the same commitment. His grandchildren remember him as their beloved Zaida, who taught them to dream and inspired them to achieve, and who demonstrated by his own actions that giving back to one's community is not only a choice but a responsibility. As a son-in-law perceived, it was a privilege to be a member of his family, whether by birth, by marriage, or simply by his willingness to "draw the circle wider," as he used to say. It constituted also an obligation to show the same thoughtfulness, generosity of spirit, and concern for humanity that Harry himself embodied. Long and sometimes heated discussions of issues of the day were an integral part of any Gutkin get-together, and remain for his extended family among the most cherished legacies of a man who contributed so much to so many in the community at large.