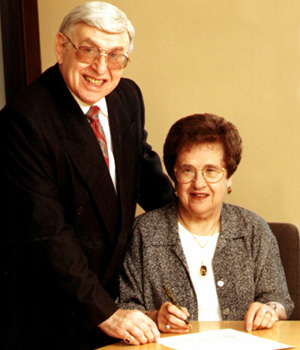 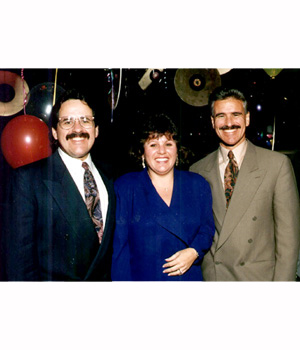 My father, Nathan was born in Koronetz, Vilna on October 27, 1887. He had escaped from Lithuania to avoid the Russian Army and arrived in Saint John, New Brunswick in 1906. While others on the boat kept going West, my father settled permanently in Saint John. My mother, Mary Hains, arrived from Lithuania about the same time, and in 1911 they were married. They kept an Orthodox Jewish home and were very involved in the small Jewish Community. I was born in Saint John on November 6, 1921.

Marcia's father, Charles Duboff, came to Winnipeg with his parents around 1912. His parents did not find Winnipeg religious enough and quickly returned to Russia, leaving their son behind. He went to work in Morden for his Rabinovitch uncles and subsequently returned to Winnipeg. Marcia's mother, Eva Weisman, was born in Bessarabia and at the age of 18 left for Buenos Aires, Argentina and a year later moved to Winnipeg. In 1919 she and Charles were married and in 1922 Marcia was born.

I attended Mount Allison University, where I had three great years — I played basketball, played clarinet in my band, "Meltzer's Marauders", and was active in Young Judea. After three years, I decided to study law and earned my Law Degree at the University of New Brunswick School of Law in 1946.

While in Young Judea, I was asked whether I would like to correspond with a beautiful young lady in Winnipeg, Marcia Duboff. We began writing letters and, through our years of corresponding, developed a wonderful friendship. Just before starting Law School, my father suggested I take a short vacation — I decided to go to Winnipeg. I arrived on a Sunday and by Tuesday, Marcia and I were engaged. We were married in Winnipeg in December, 1945 and after I had finished law school in Saint John, we moved back to Winnipeg.

I was unable to find employment in a Law Office so I and my friend Dan Zaharia, a Ukrainian real estate agent, decided to open an office together — he would sell houses and I would do the secretarial and legal work. A year later Earl Essers joined me and the law firm of "Meltzer & Essers" was born. The furniture was supplied by Saul Silverberg at no cost.

Soon after coming to Winnipeg, I became involved with B'nai Brith, and served in many positions including President of District Grand Lodge No. 6, which encompassed 8 states and 4 provinces and had close to 50,000 members. I am proud to be the only Canadian to have served as President of that district, and to have been a member of the Board of Governors of B'nai Brith International. I thoroughly enjoyed my involvement with this organization and the opportunities to travel and meet many people worldwide.

Community life has always been very important to me. I have served as President of the Winnipeg Jewish Community Council. Mayor Bill Norrie asked me to serve on a Committee for Cross-Cultural Relations, and I was pleased to serve. I was involved with the Jewish National Fund and served as the Chair of one of the first Negev Dinners. I have also served on the Board of The Sharon Home, and on the Grants and Scholarship Committees of The Jewish Foundation of Manitoba where I presently sit on the Board of Governors.

The Meltzer-Duboff clan consists of 3 children and 7 grandchildren. Charles (Chuck), married to Maxine, has 3 children. Marvin and his wife Ruthie have 2 children, and Sheila and her husband, Arthur Fox, have 2 children. With all my activity in the community, I am proud to say that Marcia has always supported me and has provided a warm, caring home for our family. She is a sweetheart, a delightful, compassionate person — and a fabulous cook!

I think this community is unparalleled in its activities and accomplishments. While I miss the community life of the past with its many thriving organizations, I believe that the Campus is important and relevant for community life of today. I am thrilled to see various agencies working together on common objectives. Still, I am nervous about the present generation — how will we get them interested enough to carry on? Have we instilled values that will last? I wish for future generations the same joy and fulfillment that I have derived from Jewish community life.