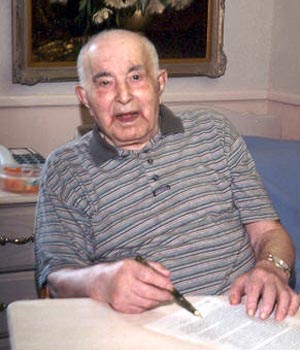 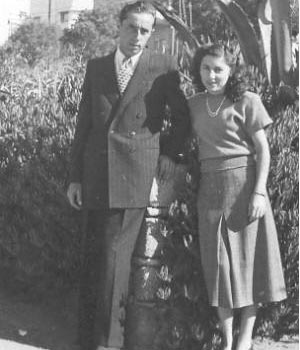 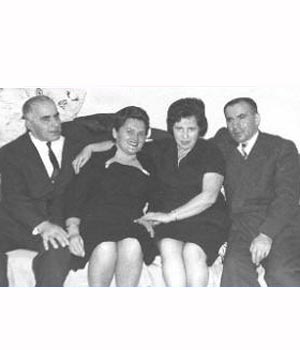 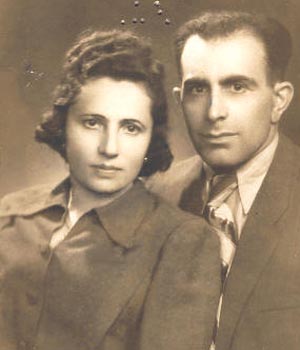 Mendel Low is now feeling alone. June 24, 2001 will be his 101st birthday. Born in what is now Poland, he is one of five children his parents Nissan and Miriam raised. He feels alone today as he recollects how his mother, brothers, sister and extended family were exterminated during World War 11. His father had died during World War 1.

It was during the First World War Mendel recalls, that his family was uprooted as the Russian army pushed into territory that was under Austrian control. Mendel remembers that the Austrian army regained control of that area and the Low family returned to their hometown. When World War 11 broke out the family remained in their town until they were rounded up and shipped to another town as part of the plan to segregate Jews from the rest of the population. Mendel recalls how as a single man he decided to refuse to move and then spent the next twenty-two months hiding in the woods. As an act of mercy he allowed a young Jewish girl who had been forced to work for the German police to hide with him. This girl, eighteen years his junior was eventually to become his wife, Miriam. Mendel tells the story that his early efforts to marry Miriam were rejected by his mother due to his mother and his bride-to-be both having the same name. It was a time when children hardly ever contradicted their parents Mendel states.

Mendel and Miriam lived for five years after the war in an area devoid of any Jews. Their efforts to have a child failed and a medical procedure left Miriam permanently unable to conceive. Recognizing that there was no life left for them in Europe, Mendel and Miriam immigrated to Israel. Mendel recalls how he spent his life in Eastern Europe as a butcher and now he arrived in Israel and felt that there was no need for a butcher in this desert country. After eighteen months in Israel and based upon information from their friend Joe Hecht they decided to come to Canada and arrived in Winnipeg in 1952. Settling down to a more stable life they were finally married by a rabbi and two witnesses having already spent many years together.

Being older and late to the community Mendel worked hard at a variety of butcher shops, from Chicago Kosher to Muttner's Kosher Butcher. The family joined the B'nai Abraham Synagogue, although not religious they wanted a sense of community. Mendel speaks proudly of the fact that he was able to purchase a nice home in West Kildonan in spite of all the terrible turmoil and great loss that he and his wife experienced through their lives.

After years of living independently Mendel and Miriam moved into the Sharon Home where Miriam passed away. Mendel now spends a great deal of his time thinking about the past, and how his life has unfolded. He feels that he is still friendly and enjoys meeting people. He feels fortunate that he is able to leave some monetary gifts to the Winnipeg Jewish Community institutions that he supports and to the State of Israel.