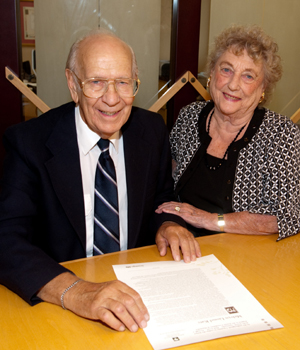 Melvyn Katz signs his story for the Endowment Book of Life, with wife Betty 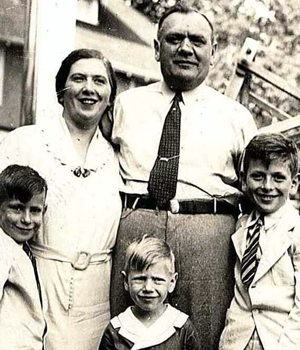 L to R: Mel, Bernice, Abe, Howard, Zen — Taken in 1937 in their backyard on Palmerston Avenue 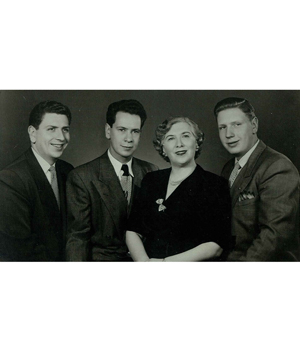 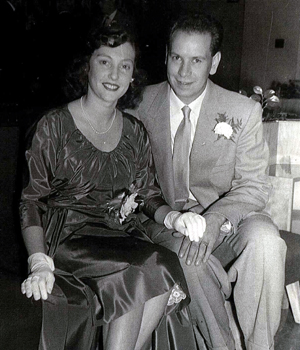 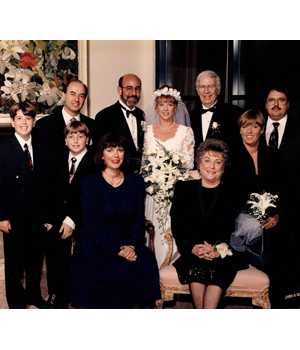 Melvyn Lionel Katz (Moshe Leib) was born on May 1st, 1930 in Winnipeg, Manitoba at Misericordia Hospital. He attended Laura Secord Elementary School from kindergarten to grade 9 and graduated from Gordon Bell High School. When Mel turned 13 in 1943, he celebrated his Bar Mitzvah at Shaarey Zedek Synagogue on Dagmar Street. He had two siblings, Zenneth Sheldon (Zealec Shmuel) and Howard Manley (Hershel Menni). Zen, as he was called, was born in 1927 and was adored by his younger brother. Anything Zen did, Mel mimicked and the two remained very close throughout their lives. Zen passed away in June 2004. Mel's younger brother, Howard, was born in 1933. Howard was a comedian from birth. He loved to tell jokes and relished the attention he received from his audiences. Howard passed away on July 31st, 1995.

Mel's father, Abraham Isaac Katz, was born in Prineu, Lithuania in 1885 and came to Canada in 1905. Settling in Kenora, Ontario, Abraham became involved in the raw fur business as a buyer from Natives & Trappers, as well as selling blueberries and fish. In 1912, he purchased the Commercial Hotel in Kenora. In 1924, during a business trip to Montreal, he met the love of his life — Bernice Levey and in June 1925, they were married and moved to Winnipeg and lived on Palmerston Avenue.

Mel's father was very proud of his three boys - especially in Shul. "When my father took me and my brothers davening, we were known in the congregation as 'Katz and the three kittens'," Mel fondly recalls. "He was especially proud when the four of us would go on the bima and cover our heads with the talis to perform the service of the Cohanim." Mel remembers his father asking him if he knew what the fastest thing in the world was? Mel responded "lighting". His father said "no, it's the mind." Spending summers in Kenora always brought back happy memories. "We would go to Kenora and stay at our hotel, where we spent our summer days boating, swimming and participating in your typical summer activities, such as camping," Mel reminisces.

Mel's mother Bernice was born in 1897 in Rochester, New York. She was a very gracious and loving lady, a marvelous baker and a meticulous homemaker.

The Katz family suffered two major tragedies. Mel's father, Abraham, passed away on January 30th, 1948 - when Mel was only 17 years old. Years later, on April 3, 1960, Mel, his wife and children, and his mother, Bernice, were on their way to visit his brother Zen in Kenora. They were involved in a major car accident that took Bernice's life. "Needless to say, this was a very sad and painful time for everyone," explains Katz. "My mother was very much loved; thankfully no one else was seriously injured."

Mel met his wife Betty Joan Gordon in July 1945 when he was 15 years old. Mel didn't see Betty again until September 1946 when she started going to Gordon Bell High School, which he was also attending at the time. In September 1948, Mel moved to Kenora to work for his cousin at his clothing store. After working there for a year, he decided to move back to Winnipeg. The first thing he wanted to do was to buy a car. "The first girl I took for a ride was Betty; be it four years later," says Katz with a laugh. Betty decided to convert to Judaism in 1952, where she went to the mikvah and was given the Hebrew name �Sora Yoffa'. In October 1953, they finally got married at the Shaarey Zedek Synagogue by Rabbi Milton Aron and have been members of the synagogue ever since. They bought their first home in October 1955 on Lanark Street, which they have lived in for 54 years.

Entrepreneurship ran through Mel's blood as he enjoyed taking on new and unique business ventures. In 1959, Mel and his brother Howard decided to venture into the nightclub business and managed the "Club Copa Cabana" and "Ranchos Don Carlos" with the intention to buy. This however did not materialize.

In August 1960, Mel teamed up with Howard once more to purchase the Chic-n-Ribs House on Harrow Street and renamed it the Bon Vivant. The restaurant was famous for its home-delivered Gourmet Smorgasdinner, which was unique to Winnipeg at that time. The Bon Vivant operated as a nightclub from 1962 to 1966.

Mel's greatest wish for the Jewish community in Winnipeg is that it continues to flourish and that anti-Semitism will, one day, be eradicated.

Participating in the Endowment Book of Life program has given Mel an opportunity to leave a lasting legacy to his family and the community. "I realized that I needed to do something to show we existed," says Katz. "I would like to be remembered as being passionate towards my business ventures and that I loved my wife, children and grandchildren very much and always strived to make their lives better."