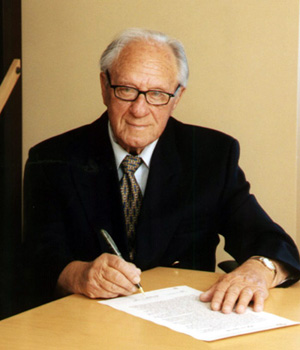 I was born in Winnipeg on December 15, 1914. My mother, Sarah Shatsky, was also born in Winnipeg, on November 29, 1892. My father, Louis Leonoff, immigrated to Canada from the Ukraine with his parents and four siblings when he was twelve years old. His youngest sister was born in Canada.

My parents married in 1909 and had four children, Lyall, Vera, me and Sheila. During the general strike of 1918 my father ran a 'jitney' service - he and a friend purchased a car and for five cents a ride transported people from Portage and Main. Because he spoke several languages he later served as an interpreter for the Winnipeg Police Force. This in turn led to his employment with the McDonald Detective Agency and our move to Calgary when I was four years old.

In Calgary I started school late because I was small for my age and had no birth certificate. Instead of school I attended Hadassah meetings with my mother. After four years in Calgary my father refused to investigate a Russian Jew and quit his job. After a brief stint in Portage la Prairie we moved back to Mountain Avenue in Winnipeg's north end, and my father went from one job to another.

I attended Machray School and St. John's Tech where I was a good athlete but an average scholar. I played YMHA softball and was also involved in track and field and soccer. I was very close with my maternal grandparents.

When I finished school I had a number of jobs, including working in a sweatshop on Magnus and Main where I was paid $1.50 for a 60-hour week.

On August 31, 1940, I married Idy Rosenberg. She had to hide the fact she was married so that she could continue working at The Bay. I worked as a travelling salesman to support my household and my widowed mother and youngest sister. In the second year of our marriage we moved to Fort William for approximately two years, and then moved to Winnipeg, where we had three children

Our son Larry is now a lawyer living in Toronto with his wife Arlene Segal and two children Steven and Rachel. Arthur, a psychoanalyst, lives in Ottawa with his wife Linda Haddon and daughters Shayna, Holly and Emily. Heather, a Winnipeg lawyer who is Director of Constitutional Affairs for the Province of Manitoba, is married to David Deutscher and has a daughter Elana. (Idy passed away in 1987, and in 1989 I married our friend, Fanni (Bernthal) Starr.)

I eventually got into the manufacturing business, operating 20th Century Headwear with a partner. Later I was a partner in Diamond Importing. I have belonged to the Traveller's Association for 50 years and am a life member of Hadassah. I have also been involved with B'nai B'rith and other organizations.

I have always enjoyed giving to charities and helping others, and hope that my fellow Jews will do the same and continue to be good citizens of their community and of the larger world community.