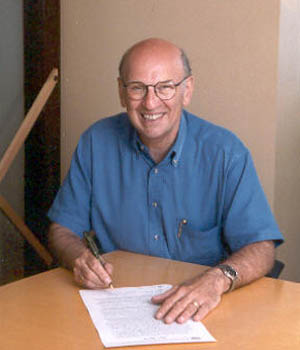 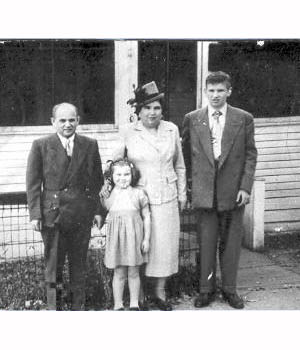 Sam and Rose Reich with their children Max and Lorraine 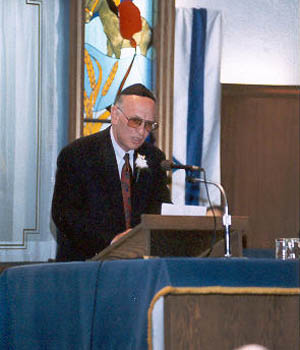 Max Reich at the Rosh Pina

Max Reich lives life with gusto. As he tells his story, one is struck by the vitality in the telling, the laughter in his recollections and the thankfulness for what he has experienced and has learned.

Gomez Avenue, behind the grocery store was Max's first home. But before we start there Max has to tell the story of his 100 years old maternal grandfather, Chaim Silverman. After spending twenty years in the Czarist army in Vladivostok, Russia, where he met Leon Trotsky, he went back to his birthplace, married at thirty-five, had four daughters and then left his family to come to Canada to work as a blacksmith. With no command of the English language, a skill he never acquired, he earned a living and sent for his family and other relations. His wife had died in Russia and his daughters barely knew him. One of these daughters was to be Max's mother.

Max's father Sam was born in Kolo Poland and arrived in Canada in 1922. Sam married Sarah, the second eldest daughter of Chaim Silverman. Sarah's early death and Jewish custom allowed Sam to marry Chaim's third daughter Rose. From this marriage came two children Max and Lorraine (Reiner). Living in the back rooms on Gomez Street Max recalls his father, 5'2" overweight and a chain smoker. Possibly due to this lifestyle Sam died at a relatively young age. It was Max's mother who had a major impact on him. She was a strong, energetic and forward thinking woman. She never read or wrote a word of English but always believed in the value of owning real estate. As a widow she continued to run the grocery and began to purchase and rent out houses. It was with this background that Max at thirteen years of age was introduced to the world of real estate.

Living next on Polson Avenue Max attended Ralph Brown, Faraday and St. John's school. Growing up quickly, Max was not interested in formalized education. Leaving school after grade eleven he was anxious to enter the world of work. After a series of smaller jobs he joined the CNR and during that time he began to sell real estate until he left the railway permanently to focus on a variety of positions within the realm of real estate. His working career was interrupted with a year of adventure seeking traveling through Europe and Israel from 1956-57.

Returning to Winnipeg, he combined his bookkeeping skill with his interest in real estate and began working for various finance companies and audio businesses, first the House of Stein and later on, Advance Electronics. During all this time Max continued to acquire real estate. Meeting one of his mentor's Max was told that if you wanted to make money you should "sell houses to the working person so that the payment is the same as rent". Following this advice, Max interviewed and selected who he would put into the many homes that he had acquired over time. His character judgement proved to be flawless.

In 1965, he married Fay Tessler. Together she worked with Max in the "after work" real estate business. Finally striking out on his own, Max opened Astroid Management, which manages a wide variety of property. Max is not reluctant to state that Fay has been a major part of their success. Her administrative and office management expertise is a perfect counterbalance to his marketing and promotional skill.

In addition to their real estate and management business, Max and Fay have three children. Stephen lives in Toronto, Shani in London, Ontario and Cal, who is utilizing his urban studies training by working in the family business.

Max has a thirst for knowledge. He is voracious reader who is always open to new ideas and new people. He is anxious to meet and learn from people from a variety of walks of life. In addition, he believes and feels that he has lived this belief, that if one benefits from the community they must be willing to give back to the community. To that end he has been active in numerous local Jewish organizations.

If he had to write his own epitaph, he would like to be remembered as an honest man who treated all people, customer and investor alike, in a fair and honest manner. His hope for our community is that we provide economic opportunities for our youth so that we may maintain a vibrant and growing Jewish community.