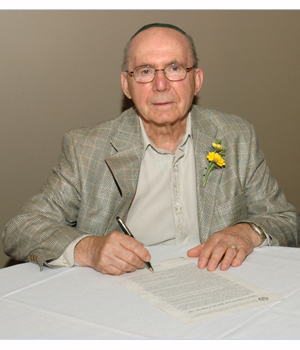 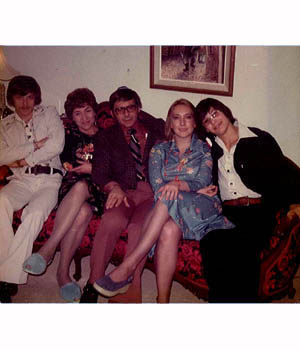 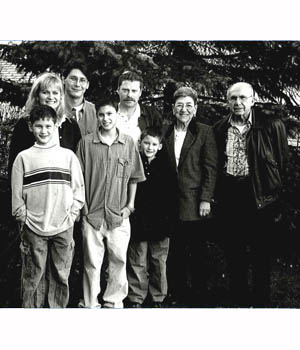 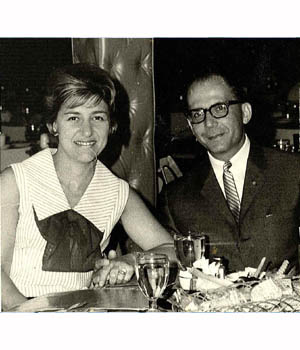 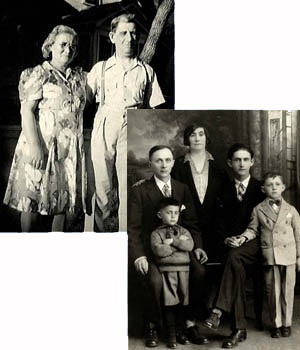 When Moe Marr's father, David Marashinsky, arrived in Winnipeg in 1919, he did what was common at the time - he began working and saving money so that he could bring his parents, Leib and Liba Rose, over from Lithuania. It was only once they too were settled here that David sent for his wife, Hilda (Petrobnick,) and young son, Phil. In Winnipeg, David and Hilda had three more sons, Earl, Moe and Myron. Two other sons, Jacob and Israel, had died in Latvia.

David, like his father before him, was a finish carpenter. He had been successful in the old country, but in Winnipeg his business plans went awry, leaving him to work for years at the Keewatin Box Factory and eventually, as a result, to die from tuberculosis. He was a quiet and reserved man who loved music and dancing and always had words of encouragement for his sons and others.

His wife Hilda was a well-educated, free thinker who came from a liberal, orthodox and advantaged background. She was a skilled seamstress and had a beautiful singing voice. Her mother, Tzerl, became mute after witnessing her husband's murder during a pogrom. In Winnipeg, she resided at the Sharon Home, where she worked as a cook.

Moe, born in 1924, inherited many of his parents' fine qualities. He is a kind, soft spoken man, and a skilled artist and singer who has always tried to remain positive and encouraging when dealing with others.

Moe grew up on Euclid Avenue where he had many non-Jewish friends, but still experienced some anti-Semitism. While he had many Jewish neighbours at one time, most of them had moved away by the time Moe was a teenager. Moe's family, however, was never financially able to move up out of the neighbourhood. Moe attended Norquay, Aberdeen and St. John's Tech, and after-four classes at the Talmud Torah. He had his Bar Mitzvah at the Ashkenazi Shul where his Zaida built the bima.

Moe quit school in grade 10 and began working as a shipper at the Nozick Commission where his older brother Earl worked. He joined the Air Force when he turned 18 and married in 1944 while he was still in the service.

Moe had met Daisy Greenberg at the YMHA on Albert Street when he chose her for a dancing competition when he was 16 and she was 15. Earl had encouraged Moe to begin hanging out at the Y so that he could meet Jewish kids. Unable to pay the necessary fees there, Moe arranged to work as a handyman and teach woodworking so that he could participate in activities like gymnastics. Daisy's father, Samuel Greenberg (wife Tseicel), managed the basket room at the Y and became like a dad to Moe.

After the war, Moe sold household goods and ladies accessories on the road — a job that was difficult on him and on Daisy. In 1956 Moe moved his family to Portage la Prairie where he had found work in women's fashion retail. In 1961 he established Marr Fashions, and eventually owned and operated six stores in rural Manitoba and, for a short time, two in Winnipeg. Moe moved back to Winnipeg in 1983 and closed his stores and retired in 1989.

In Portage, Moe was active in the B'nai B'rith Lodge, attended shul every Friday night and arranged for Hebrew instruction for the community's Jewish children. He served as Rotary president and sang tenor in a barbershop quartet that traveled and performed widely. Daisy was involved in Hadassah and was a fabulous mother to their three children: Sheryl, who now lives in Calgary and has a daughter, Andrea, Hartley (wife Daneta) who lives in Banff and has two daughters, Tova and Tara, and David who lives in Winnipeg and has three sons, Josh, Jared and Jessie.

After 60 years of marriage and many years struggling with illness, Daisy passed away in January, 2005. Moe now keeps busy singing in the Temple Shalom Choir and sculpting, a hobby he began many years ago when he sprained an ankle playing tennis in Palm Springs and was looking for something to fill his time. Back in Winnipeg, Moe took stone carving lessons at Forum Art Winnipeg and co-founded the Manitoba Institute of Sculptors and Artists.

Moe hopes to be remembered as someone who was easy to get along with and someone who was proud to be Jewish. This, he says, is the most important lesson to leave to future generations — to remember who you are and to be proud of it.