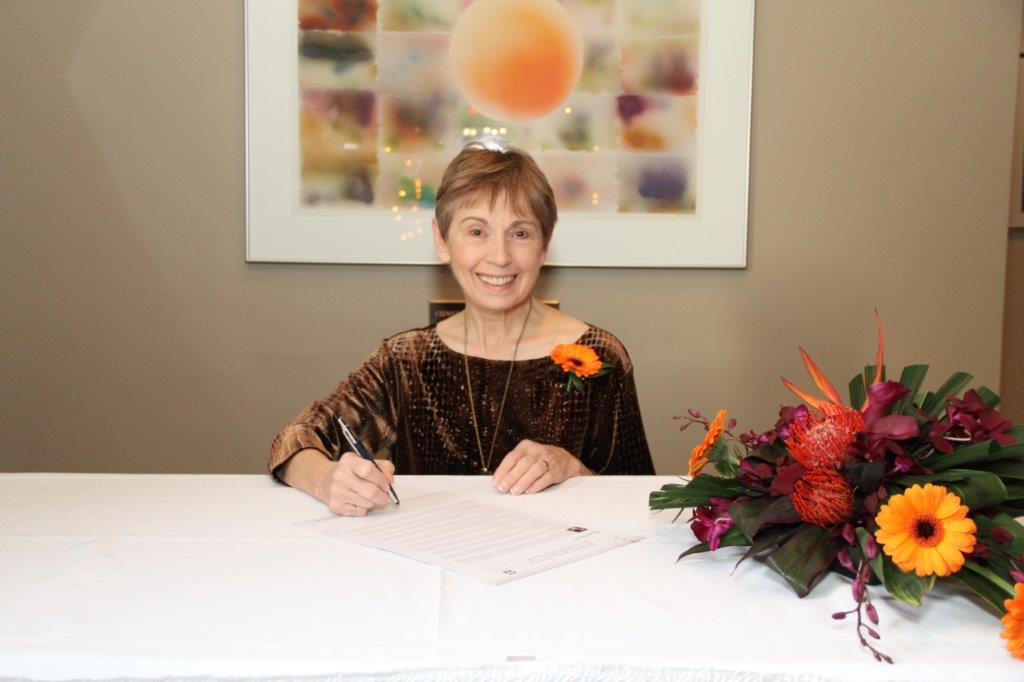 Florence Kanee (née Barish) was born in 1909 in Winnipeg. She and her sister, Bertha, were the daughters of David and Sarah Barish (née Boutin). Their father came from Russia; their mother from France. Florence had the soul of an artist. As a young woman she sketched, designed clothing, and acted in repertory theatre and with the Chautauqua. She pursued her talents at the University of Manitoba, but had to withdraw for financial reasons during the Depression. She met Sol at University — he was one of many suitors, but won Florence over with his eloquence. They eloped in 1935, and Florence gave birth to Stephen in 1941.

While she could not pursue a career that nurtured her artistic talents, Florence expressed them in the life she embraced as a wife and mother. Her original artwork complemented the many scrapbooks she made to chronicle Stephen's and Sol's activities and accomplishments. Florence's taste in dress and design was understated and elegant. She didn't particularly enjoy shopping for herself, but loved to find unique gifts for others. Her stylish gift wrapping was legendary, delighting the recipients with mini works of art.

Florence was a true home maker. Like so many wives and mothers of her era, she created a loving sanctuary which provided the solid foundation for Sol and Stephen to reach out into the world. And she embraced everything and everyone they brought back to her, especially her daughter-in-law MaryAnn and the close friends and associates from Sol's and Stephen's many involvements.

She was shy and did not have many friends, but friendships she had were deep and life-long. The story of Florence Kanee would not be complete without paying tribute to her dearest friend, Bernice Berkowitz, who supported her during the many times when Sol was away.

Because she took joy in everyday life, Florence made everyday experiences a joy for those around her, whether having pancakes for dinner with Stephen and MaryAnn or noticing the tiniest details on colourful scarves Sol brought back from his trips overseas. She was her family's cheerleader and muse. When Sol won the hand of Florence Barish, he knew he had found a partner whose artistry and grace would enrich the life they created together.

Sol Kanee's life was a tapestry of exceptional contributions in law, in business, and in community service at home and abroad. Sol looked upon his good fortune as a gift to be shared. He lived comfortably and provided generously for his family, but after that, his energies were directed to helping others. Sol Kanee was born as Soloman Kanee in Melville, Saskatchewan, in 1909. He was the oldest child of Sam and Rose Kanee (née Lercher). Sam came from Belarus; Rose came from Galicia. Sol's siblings were Abe, Ben, Ricky, and Harry. The family ran a general store and a grain trading business in Melville and then purchased a mill in Weyburn, which burned down, and then took over Soo Line Mills in Winnipeg.

At the University of Manitoba, Sol quickly became recognized for his debating and oratorical skills. He spoke with passion, precision, and verve and was a successful competitive debater.

After earning his law degree in Saskatchewan, he started a practice in Melville in 1933. A vocal critic of fascism and Nazism, he enlisted in the Canadian army in 1940 and trained as an artillery officer. In 1943, he went overseas and served in Europe and the Pacific.

When the war was over, Sol, Florence, and Stephen moved to Winnipeg and Sol returned to law as part of Shinbane, Dorfman & Kanee. At the same time, he was at the helm of Soo Line Mills, which he took over in 1951 after his father died. In 1955, Sol invested heavily in technology and Soo Line became the first virtually dust-free all pneumatic mill in the western hemisphere. Production increased dramatically and Soo Line became a leading specialty flour mill. Sol was delighted to say that Churchill's birthday cakes used Soo Line Mills Happy Girl Flour.

While Sol was a brilliant lawyer and a successful businessman, it was for his community service that he is most fondly remembered. He had a deeply ingrained sense of social responsibility. As a fiercely passionate Canadian; a staunch Zionist; and a proud Jew, he was eager to contribute his talents to causes that touched him, and eager to build relationships with decision-makers and thought leaders who shared his passions and interests.

In the local Jewish community, he served as an advisor to and the third Kanee to be Chair of the Sharon Home among other activities. He cared deeply about building relationships outside of the Jewish community, too, and was active with the United Way, the Royal Winnipeg Ballet, and other local organizations. He also served as Chair of the Board of Governors of the University of Manitoba.

He served as a Governor with the Bank of Canada for 17 years and chaired the Federal Business Development Bank from 1975 to 1978. He had the ear of Prime Minister Pierre Trudeau (who sought his advice on Israel and Jewish affairs), and other influential parliamentarians, including life-long friend Mitchell Sharp who served as Minister of External Affairs.

It was perhaps in national and international Jewish affairs that Sol Kanee had his greatest impact. One key moment stands out as a shining example of his influence. In 1951, he convinced cabinet minister C.D. Howe to sell artillery to the fledgling State of Israel at a much reduced price, much to the delight of a young Shimon Peres who had been sent to Canada to strike a deal. The next night, Sol Kanee's mentor Sam Bronfman hastily organized a fundraiser in his home to pay for the arms for Peres (even the reduced price was too much for the young state). In the 1960s, Sol participated in the Canadian mission to Russia that negotiated major grain sales during the Russian crop failures.

Sol Kanee served as President of the Canadian Jewish Congress and held executive positions, including Treasurer, with the World Jewish Congress. He advocated for reparations for Holocaust survivors and pressured Russian leaders to relax their rules on Jewish emigration. He joined Edgar Bronfman in negotiating the Russian Head Taxes that permitted the large wave of Russian immigration to Israel. Prior to the birth of the modern State of Israel, he helped to raise money to support Jews moving to Palestine.

Alongside his passion for Jewish affairs, he firmly believed that communities in Canada should cooperate. He worked closely with his good friend Art Mauro to make Winnipeg a more tolerant and accepting place.

Sol Kanee was made an Officer of the Order of Canada in 1977; Companion of the Order in 1982; and was awarded the Order of Manitoba in 2000 — just a few of the numerous awards and accolades that came his way. Sol and Florence's names grace physical spaces, lecture series, and awards.

Sol's was a busy life. He travelled frequently for his business and volunteer work. He found peace and quiet in the family's Ash Street home and at the cottage in Minaki. He enjoyed his Chivas Regal (a Bronfman beverage, of course); a round of golf; managing his renowned stamp collection; and spending time fishing with friends and with Stephen.

Sol and Florence together were generous, caring, and passionate about the community. Florence died in 1990; Sol in 2007. Few have left a greater mark. L'dor va'dor — from generation to generation — by their example Sol and Florence continue to inspire through their values of commitment to community and Jewish life; their love and support of the arts; education; and their embrace of tikkun olam, the Jewish imperative to repair the world. Sol and Florence's values are reflected by the children Stephen (z"l 2013) and his wife MaryAnn Lippay.