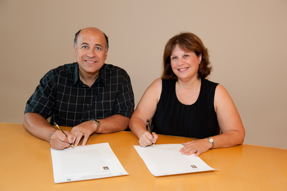 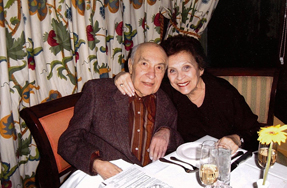 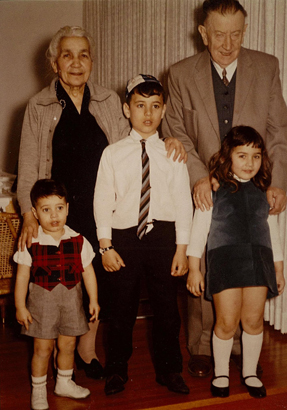 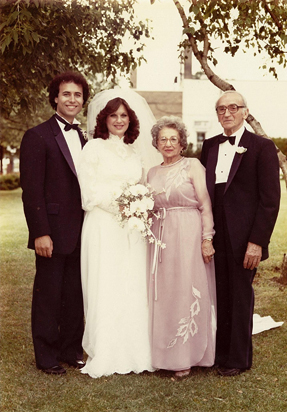 This story begins at 11:45 am, July 17, 1957 when Martin was born at the Women's Pavillion, General Hospital in Winnipeg. Martin was the first child for Harry and Evelyn Gurvey, first grandchild for Hymie and Merle Mozart, and the first Winnipeg born grandson for Aaron and Raizel Gurvitch . Two siblings followed, sister Gayla born in 1959 and brother Alan born in 1962. The Gurvitchs arrived in Winnipeg from Russia and Lithuania around 1910 and raised four sons, Maurice, Harry, Syd and Gerry. Aaron owned a fruit stand on Main Street and Raizel honed her domestic skills on Alfred Avenue and later on College Avenue. When their eldest son Maurice had difficulty getting a job due to anti-Semitism, the brothers decided to change their surname to Gurvey. Aaron passed away in 1965 and Raizel in 1966.

Hymie Mozeszniuk arrived in Montreal from Pavelich, Russia after the First World War with no knowledge of English, and after the immigration officer tried repeatedly to understand the pronunciation and spelling of Hymie's surname, he finally said with frustration," Well, you're going to be Hymie Mozart ". Thus, began Hymie's lifelong iteration of his name, " Hymie Mozart, just like the great composer". Hymie worked as a newsie on the trains and married Merle Fleishman in 1929? They had two daughters, Evelyn and Mindy. Hymie and Merle ran restaurants, The New Hargrave Lunch across from the YMHA and later Hymie's Delicatessen on Main and Polson. The Mozarts had modest success in business, mainly due to the fact that Merle's main concern was that nobody left hungry. The thickness of corned beef sandwiches made for meagre profits and she would regularly serve patrons heaping stacks of chips, or seconds at no extra charge. Hymie died in 1989 at the age of 92 and Merle in 2002 at the age of 96.

Martin's father, Harry was a pharmacist in Winnipeg for over 50 years. He apprenticed at Ringer's Drugs, owned and operated Ellice Pharmacy, co-owned and operated Gurvey's and Rudy's Ellice Pharmacy and ended his career at Shopper's Drug Mart at River and Osborne. Evelyn studied library sciences at McGill before she was married and after eighteen years as a stay-at-home mom entered the work force as a library assistant at the University of Manitoba library the same year as Martin began his studies at the University. Harry died in 2005, one month shy of his 90th birthday. Evelyn continues her volunteer work with the Stay Young Club at Shaarey Zedek and Women's Committee of the Winnipeg Symphony, and enjoys playing mah jong.

Martin spent his first four years living at the Greenaven Apartments in the north end and the family moved " south" in 1961, building a home just north of a vast open field on Elm Street near Mathers. Martin attended Montrose School and then Grant Park for grades seven through twelve. He went to Ramah for nursery and kindergarten, and Herzlia night school from grades one through eight except for grade seven night school which was at Ramah. Martin's fond memories of his secondary school years reflect his love of learning, music and sports. Highlites include winning the Provincial Bantam Football Championship and scoring a touchdown at Taylor field in Regina during the Western Canadian Championship, playing on the school Reach for the Top team when he was in Grade 10 and starring as Conrad Birdie in the Grant Park production of Bye Bye Birdie.

Martin's childhood was also rich with involvement in Jewish organizations and culture. He had his Bar Mitzvah in 1970 at Rosh Pina and was a proud member of the Gurus at the Y Saturday afternoon clubs. He also was an active member of Winnipeg '38's in BBYO and attended B'nai B'rith Camp for three summers.

Formal education continued at U of M, Broward (Florida) Community College and then Canadian Memorial Chiropractic College in Toronto. It was while studying in Toronto that Martin met Brenda on a blind date set up by a classmate. Martin graduated as a Doctor of Chiropractic in May, 1982 and was married in August, 1982 in Toronto. He brought Brenda to Winnipeg (kicking and screaming) and started a practice on Main and Cathedral , just a few blocks from the Greenaven Apartments where he first lived in 1957. Brenda and Martin both anxiously awaited the arrival of the practice's first scheduled patient (and only patient for that day). Unfortunately, the patient, John Smith, was a no-show. When Brenda called the phone number for Mr. Smith, a recorded message for the weather forecast played. This prank was not amusing to the young couple. Martin also purchased a satellite practice in Morris, Mb. which he operated for eighteen years.

Martin and Brenda have been blessed with three children, Faren, born in 1986 who works at the national office of the Canadian Friends of the Hebrew University in Toronto; Marli, born in 1987 who is an investment analyst at I3 Advisors in Toronto and Harlan, who is studying at the Richard Ivey School of Business at University of Western Ontario in London. Faren and Marli's Bat Mitzvahs were celebrated at Massada during a fabulous and memorable family tour of Israel in 2000 and Harlan had his Bar Mitzvah at Shaarey Zedek in 2003.

Martin's professional activities include over twenty years on the Board of the Canadian Chiropractic Research Foundation, eight years as Registrar of the Manitoba Chiropractors' Association, as well as board member on the national chiropractic regulatory board and Manitoba representative on the national examining board. In 2010 Martin was honoured with an Award of Merit by the Canadian Chiropractic Association for his years of service to the profession, one of only five Manitoba chiropractors to ever receive this prestigious award.

Martin's hobbies over the years again reflect his love of sports and music. He has been a member of the Golden Chordsmen Barbershop Harmony Society Chorus for the past twenty-eight years, performing throughout Winnipeg and rural Manitoba and served as Chapter president in 2009/10. As the Winnipeg Chapter's first Jewish member, Martin is directly or indirectly responsible for six others from the faith currently enjoying ringing chords with the local chapter. Martin also performed at the National Council of Jewish Women gala, Ramah School reunion and Rady JCC production of the Music Man. He has coached minor football and baseball and still plays B'nai B'rith softball and Maccabia hockey.

Martin's hope for the future is that he and Brenda have instilled a passion for maintaining Judaism and the continuation of the Jewish heritage in their children. They have tried to accomplish this through leading by example so our children will be committed to doing the same with their children.