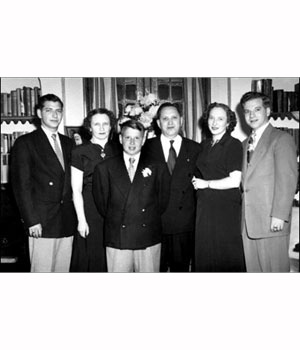 My parents, Frank & Bessie Buchwald, came to Canada as children from Basilia, Poland and Dubova, Russia respectively in the early 1900's. My father's family settled initially in Winkler, Manitoba, before moving to Winnipeg. My father was in the manufacturing business. I grew up with my sister and brother on Cordova Street in Winnipeg's south end. Ours was a home rich in Jewish tradition, family celebrations, and community involvement, including Zionist organizations, Hadassah, Hebrew University and many other local and Israeli causes.

I was born in Winnipeg and attended Queenston, Robert H. Smith, Kelvin High School and the University of Manitoba (Bachelor of Architecture). As a young adult, I was active in A.Z.A., Hillel, and Sigma Alpha Mu Fraternity. In 1961, I married Mira (Marilyn) Hamovich, and we have two children, Robyn (Jeffrey Lieberman) and Jonathan (Susan Schweid), both of whom graduated from Joseph Wolinsky Collegiate and hold degrees from the University of Manitoba. For 22 years after graduation, I practised Architecture including 18 years in partnership with Louis Plotkin. For the last 15 years I, along with Mira, have operated the Manitoba franchise of Priority Management, an international training and development company providing productivity and effectiveness training to individuals and organizations. In 1997 we were honored to have been presented with the corporate citizen of the year award by the company.

I have been active in community affairs most of my life in a variety of organizations including Combined Jewish Appeal, Canadian Friends of the Hebrew University, Winnipeg Board of Jewish Education (Chairperson 1981-83) and the Manitoba Federation of Independent Schools (President 1985-89). I was most honored to have been chosen by C.J.A. for the Shem Tov Award in 1998.

I would like to be remembered as someone committed to the cause of Jewish and Independent School education in Manitoba and Canada, a supporter of Israel and our local institutions, and devoted to my family. The purpose of my commitment to the Endowment Book of Life is to participate in ensuring the continuation of a vibrant Jewish community for our children and grandchildren so that they will benefit from the enhanced quality of life established by those who came before them.