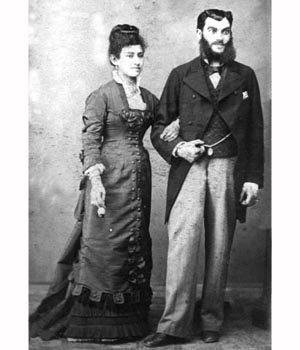 My grandparents, Emmanuel and Rachel Wilder 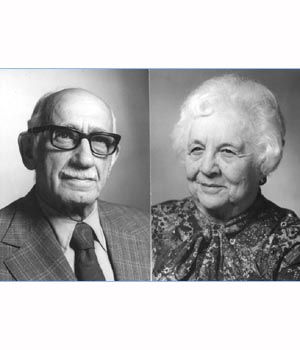 My father's family originated in Spain and eventually moved into Eastern Europe. My grandfather was an estate manager for a wealthy Romanian family - a "walder" - which instigated the use of the name "Wilder". The original family name was Prinz. When the Germans took over the estate in the late 1800's, my grandparents made the decision to move to Canada and, with their 8 children, arrived in Winnipeg in 1904. My father, Joseph Emmanuel Wilder, was 8 years old.

My grandfather died in 1911, but had instilled in his children the importance of learning English, being educated, getting a job, and acquiring a home. My father received a formal education, and after high school studied to be a pharmacist. He graduated in 1916, from the first University of Manitoba Pharmacy class, then joined the army as a medical sergeant. After discharge in 1919, he opened his first of three drugstores, the main store at Notre Dame and Edmonton, two others in north Winnipeg.

Hattie Lauer, my mother, was born in Montreal in 1898 and came to Winnipeg in 1906. Her family's roots were in Austria and Lithuania. Her father was a fur trader who spoke 5 Indian dialects and spent much of his time up north. My mother also had a formal education, attended Normal School and taught school in Weston. She married my father in 1920, they were married for 70 years. She passed away in 1990, my father in 1993.

My two sisters, Dorothy and Phyllis, and I were raised with the values of education and community involvement - not only in the Jewish community but in the community at large. I attended Champlain and Machray schools, St. John's Tech, and United College. I studied Executive Development at the Banff School of Fine Arts, and received my Marketing degree from Pacific Western University. After war-time service with the Royal Canadian Corps of Signals, I joined the family wholesale drug business for 8 years, then joined Chanel inc. Canada, and after 40 years, retired as a regional sales manager. I was the founding President of the Toiletries and Perfume Guild of Manitoba.

My volunteer work included serving as an Executive Board member of the Shaarey Zedek Synagogue and as a Board member of Journeys Adult Education Centre. I chaired the Town Hall Speakers' Bureau, and chaired corporate fund-raising for the Beilinson Hospital in Israel Pharmacy Campaign. I am currently a tutor in the ESL program for Jewish Child and Family Service, a volunteer with the Jewish Museum, and serve on the Board of the Jewish Heritage Centre.

In 1949, I married Phyllis Cantor. We have two children, Leslie and David. Both have continued our family tradition of community involvement. For my grandchildren, Shira and Tovah, and for future generations, I would like to encourage a sense of responsibility towards the Jewish community and the community at large. I would also like to encourage them to study not only Jewish history and traditions, but also Canadian history and traditions - if you do not learn about history, you will not learn from history.