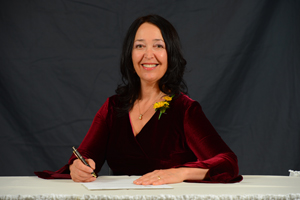 Marla Berchard signs her story for the Endowment Book of Life 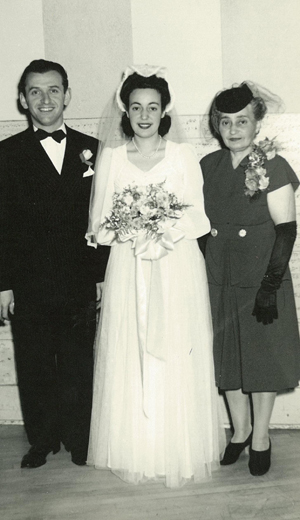 Baba Annie Rose with Lily and Wally Guberman on their wedding Day, 1945 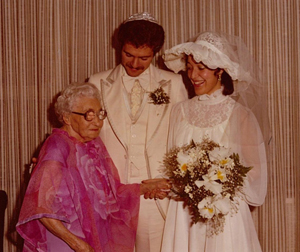 Baba wearing gown designed and made by granddaughter Marla, with Henry and Marla at their wedding, 1978 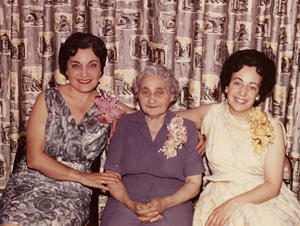 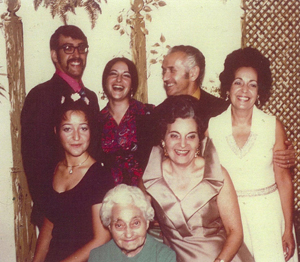 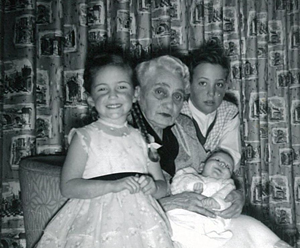 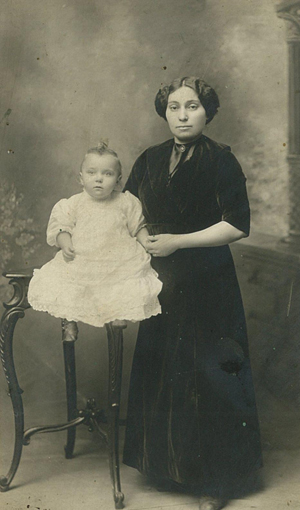 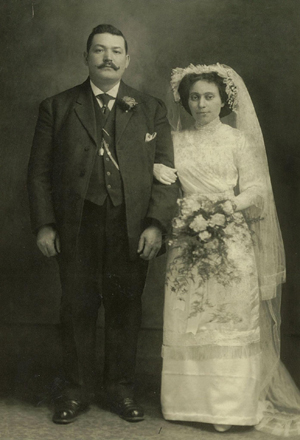 Annie Dredzen and Solomon Rose on their Wedding Day, 1912 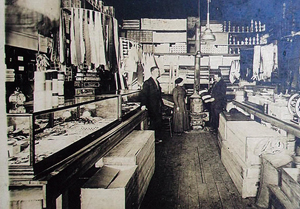 Annie and Solomon Rose in their general store, Lampman, Saskatchewan, 1912

This is the story of my Baba, Annie Rose (née Dredzen). Baba was born in Lutzen, Latvia, in 1889. She came to Canada via New York, settling in Brandon to help raise her sister Mary's six children, a love and bond that lasted a lifetime.

There she met and married my grandfather, Solomon Rose, in 1912. They moved to Lampman, Saskatchewan, where they ran a general store and where my Aunt Bea was born. Grandfather died while Baba was pregnant with my mother. Baba moved to Winnipeg where her Brandon family now lived, and my mother Lily was born.

Left to raise both daughters on her own, Baba worked hard to provide a loving, Jewish home. In 1928, she bought and ran a grocery store at St. Matthews and Agnes. Generous to her customers, she lost money extending credit, and no one left empty-handed for inability to pay.

Fiercely devoted, Baba invented ways to earn an income ensuring her daughters were fed, clothed, and educated. Moving to the north end, she rented a cottage, took in boarders, raised chickens, bartered eggs, and ran a kosher restaurant.

Though possessions were few, Baba always insisted on having a piano, hoping to make concert pianists out of her daughters. It didn't work! Auntie Bea played the saxophone, and Mom danced her way into the (Royal) Winnipeg Ballet! I'm glad Baba had the foresight to keep a piano, for seeds were planted in me as I took up the piano and pursued a lifelong love and career in music.

In 1933, during the Depression and facing anti-Semitism, Bea found it difficult to get a job and moved to Chicago, invited by a cousin (one of the nieces Baba helped raise). She married, then settled in California. Through letters, phone calls, and visits, the family remained close throughout their lives.

Baba could no longer keep the cottage so she and Mom roomed in the homes of Jewish families, providing they had space to accommodate "the piano"! They moved five times over the next six years—and so did the piano!

In 1939, Baba and Mom moved to Trail, BC, where they had cousins who ran a store. Mom met my Dad, Wally Guberman there, where they courted. Mom tells of their first date when my Dad came with a box of chocolates, not for her, but for Baba! Baba and my Dad were fond of each other from the start. Dad moved back to Winnipeg in 1944 to help run his sister's glove factory. Baba and Mom followed, and in 1945 my parents got married. Mom says she only agreed to marry Dad if Baba came along with the package! Dad agreed, and so began a lifelong, loving, and mutually respectful relationship between Baba and Dad. Baba used to say that whenever my Dad came home, the whole house lit up!

When my brother Brian, sister Sandra, and I were born, Baba devoted herself to family life. Being a grandmother defined her life with meaning and purpose. Having Baba live with us enriched us immeasurably. Baba's hands were always busy. When she was in the kitchen, we knew we'd soon be eating something wonderful. I never saw her use a recipe. Her cinnamon buns, "moon" and raisin cookies were delicious. Brian would pack a glass of milk with raisin cookies making what he called "cement" which he devoured with a spoon!

A devoted observer of Jewish customs, Baba kept kosher, lit Shabbat candles and kept a "pishka," her JNF box which she always filled. I'd visit her in "shul," witnessing her joy as she attended High Holiday services, breaking the fast with herring and rye bread. At Pesach, even our budgie's cage did not escape her watchful eye as all of the chometz was removed from the house!

Baba had golden hands. From them emerged the most beautiful creations. Whatever she could imagine, she could knit, crochet, or sew, never using a pattern. When my doll needed new clothes, Baba made her overalls. Baba crocheted and donated numerous baby layettes and booties. Her creative legacy, however, was four banquet-sized table cloths, which took her hundreds of hours to crochet, which she lovingly made for me and my three children, her great- grandchildren.

Baba contributed to the Jewish community as a founding member of the Chesed Shel Emes and as a member of Hadassah and the Golden Age Centre. She enjoyed visiting with our aunts and uncles, the late Sophie and Zion Bendel, the late Norman and Charna Guberman, and their offspring. She also loved her many trips to California to visit her daughter Bea and her husband.

I am grateful that Mom and Dad lovingly included Baba, providing her with a worry-free home, love, and care for 32 years. When she went into the Sharon Home for the last two years of her life due to her failing eyesight and inability to manage stairs, we all felt the loss, and Mom was heartsick.

Always proud of her grandchildren's accomplishments, I believe one of her proudest moments was when I announced my engagement to my sweetheart, Henry Berchard. Hearing the news, she fell back onto her bed, hands clasped to her heart, eyes cast upward, proclaiming, "Now, I will dance in heaven!"

It was June 1978 and Baba was 89. Our wedding was set for June 1979. My intuition prompted us to move the date to November 1978 which was insightful, for Baba passed away in June 1979 at age 90. One of my proudest moments was having Baba walk down the aisle wearing the gown I designed and sewed especially for her.

Baba was a gentle, kind-hearted soul, loved by everyone who knew her. A diminutive lady, whose everyday clothing was simple, yet when dressed to go out, she carried herself regally, always remaining down to earth in her heart and mannerisms. I am honored to dedicate this story to her so that her legacy and the love she created will shine on forever in the hearts of all who knew and loved her.