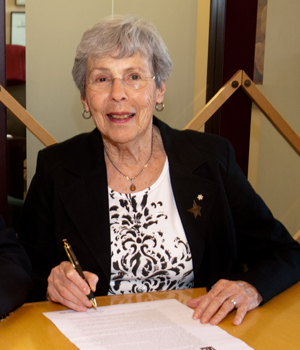 Marjorie Blankstein signs her story for the Endowment Book of Life 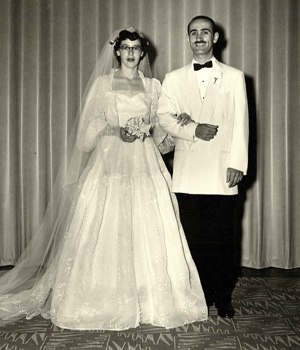 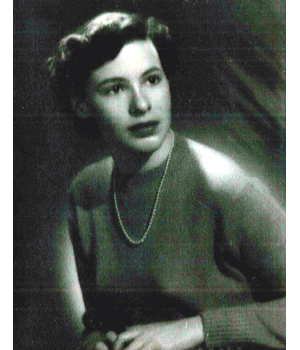 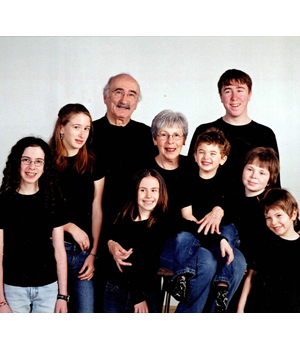 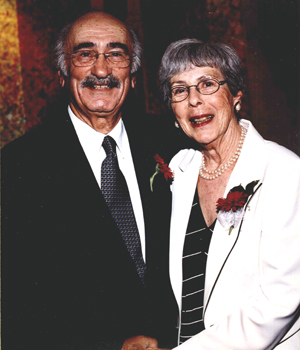 "Be the change you want to see in the world." Mahatma Gandhi could well have whispered these words directly to Marjorie Blankstein, for time and time again she has acted as an agent of change in her world.

Born in Winnipeg on June 14, 1929, Marjorie was raised in a home that was imbued with the values of kindness, tzedakah, and community service. Her mother, Rose (Bronfman) Rady was Canadian-born, an exceptional volunteer, an inimitable leader, and a quintessential lady. Her father, Max Rady, was born in Mogelev, Russia and came to Canada as a 19-year-old. Working as the secretary at Talmud Torah School, he put himself through medical school and was one of the first Jewish doctors with admitting privileges at St. Boniface Hospital. Marjorie is the middle of three children, including sister Mindel (Olenick) and brother Ernest.

In 1952 Marjorie married architect Morley Blankstein and they had five children: Carol, Dan, Linda, Leo and Max. And so began Marjorie's lifelong dual career-track: that of being wife and mother (and now grandmother), and that of a professional volunteer.

"My Mom often used to quote her Dad as saying, "If someone comes to you in need, reach out to them with an open hand. I've always remembered that," says Marjorie. Indeed, it has shaped her life.

An early involvement was with Jewish Child & Family Service (1963-65) where she chaired the Child Care Committee which researched and established a Group Home for Boys. As President of the National Council of Jewish Women, Winnipeg Section (1965-67), she led a liaison with the Junior League of Winnipeg whereby a nursery school for Indian and Metis children was sponsored in the core area of the city. As a member of the Manitoba Study Committee for Children with Emotional and Learning Disorders (1958-69), she helped produce the CELDIC Report One Million Children, which advocated integration of all children in regular classrooms rather than in segregated self-contained classes and schools. In the late 1960's she became concerned about transient and rebelling youth and was instrumental in arranging a community meeting with noted youth authority Alfred Klein from New York, which resulted in the establishment of many services such as feed-ins, youth hostels and Klinic.

Marjorie's key strengths lie in community organization and finding ways to make things happen that will benefit others. She was the first woman elected to the position of President of the Winnipeg Jewish Community Council (1979-81 and 1986). "When I was President of the Council we recognized that we had reached a state in the Jewish community where our population was shrinking, our funds were shrinking, our membership at the Y was shrinking — everything was going downhill," she says. There were two options — do nothing and watch things continue to decline, or do something to turn it around. She chaired the Long Range Planning Committee which ultimately led to the decision to revitalize and coordinate the facilities and services of the Jewish community by building the Jewish Community Campus of Winnipeg. Marjorie soon found herself chairing another committee — fund-raising! When a feasibility study indicated $10 million could be raised, her team raised $12 million. The committee went on to raise another $10 million in a second ask and today the Asper Jewish Community Campus is used by people from all parts of Winnipeg, both Jewish and non-Jewish, and serves the needs of a wide range of age groups. It has truly revitalized the community.

Among Marjorie's countless other volunteer activities are: President of Age and Opportunity Centre (1973-74), Member of the CJA Women's Division Campaign Cabinet (1975-81), National President of NCJW, Canada (1977-79), Honourary Secretary of the Winnipeg Symphony Orchestra (1974-78), Vice President of Canadian Jewish Congress — Manitoba/Saskatchewan (1982-85) and National Secretary of CJC (1989-92), Jewish Foundation of Manitoba Secretary and Grants Chair (1980-90), Founding Board Member of Women's Health Research Foundation of Canada (1983-86), Executive Member of Legal Education and Action Fund (1990-93) and First Chair of the Partnership 2000 Coast-to-Coast Committee. She has also been active with the United Way for many years and in many capacities including serving as Campaign Chair in 1994. She served on the St. Boniface Hospital Board, the Winnipeg Public Library Foundation Executive, the Millenium Library Campaign Cabinet and numerous other boards and committees. Her most recent activities include involvement on the Board of the Rady Jewish Community Centre (2001-08) and on the Board of the Mauro Centre for Peace and Justice (2002-08). She was the Honourary Co-chair of the Words & Deeds Leadership Award Dinner honouring the Richardson Family. She is presently serving as a Board of Governors' representative on the Board of Directors of the Jewish Foundation of Manitoba.

In recognition of her outstanding contributions to Canadian life, Marjorie became a Member of the Order of Canada in 1982. She has also been honoured with the Queen's Silver Jubilee and 125th Anniversary of Confederation Commemorative medals. She was recognized as the YM/YWCA Woman of the Year (Community Service category) in 1978, Jewish National Fund Negev Dinner honouree in 1980, Volunteer of the Year by the Association of Fundraising Professionals in 2000, and Distinguished Service Award at the University of Manitoba in 2003. She was the first recipient of the Sam Filer Distinguished Service Award of the Canadian Jewish Congress (1989), and also the first recipient of the Sol Kanee Distinguished Community Service Medal from the Winnipeg Jewish Community Council (1995).

To them, and to her community, she fondly advises, "Giving back is a wonderful privilege. Volunteering gives you the opportunity to participate in this wonderful community and world that we live in. It lets you play a part in making the world a better place. You learn, you grow, and you make great friends!" In other words, "Be the change you want to see�"