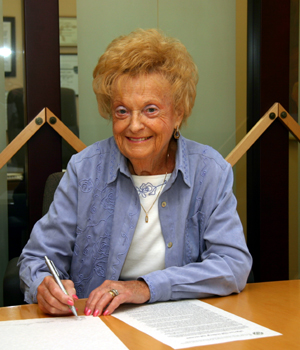 Marion Silverman adds her story to the Endowment Book of Life 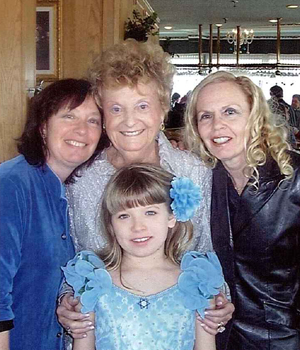 Marion with daughters Linda and Leslee and granddaughter Rachel 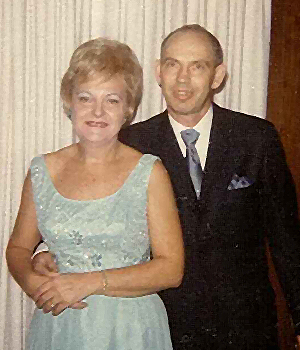 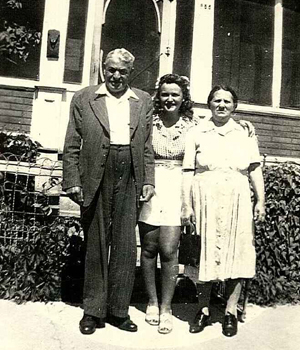 Marion with her parents Aaron and Rachel Silverberg 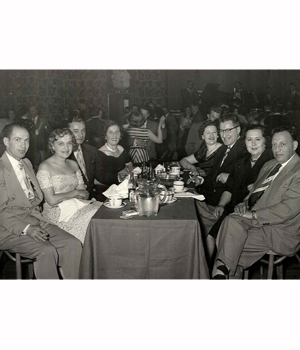 Marion and Ben (left) with her brothers and their wives

Marion Silverman contentedly looks back on a life that has been filled with many pleasures and many achievements by herself, her two daughters, her late husband, her late brothers and several of their offspring. She is grateful for the opportunities and experiences that she has enjoyed, and feels fortunate to be in a position that allows her to participate in the Endowment Book of Life program. She hopes that her contribution will someday help someone in need.

Marion was born in Winnipeg in 1925 and grew up on Alfred Avenue with her much older half sister Betty and brothers Abe, Jack and Morris. Marion had a happy childhood and enjoyed being the youngest and having three teenage brothers. All three remained in Winnipeg and enjoyed success in their chosen careers. Their children and grandchildren now live around the world and are enjoying active and fulfilling lives.

Marion's father Aaron, who had emigrated from Russia in 1912, initially worked on the CPR line. He then found employment as a delivery person with Buchwold's Bakery, often taking Marion with him as he made his deliveries by horse and wagon. Marion's mother Rachel arrived in Winnipeg from Russia in 1921, and with a kerchief always on her head and an apron always around her waist, devoted herself entirely to the well being of her family and home.

Jewish holidays were celebrated with large family dinners, and Marion regularly attended synagogue with her parents. She remembers being thrilled by the joy and festivity of Simchat Torah and being terrified every Yom Kippur when her mother would bless her by swinging a live chicken above her head. She also recalls the delicious chicken soup that her maternal grandmother Rebecca made for her every Shabbes.

Marion was a good student and loved the social atmosphere at Strathcona, William Whyte and Isaac Newton schools. She was active with the Zionist group Young Judea, and through various organizations frequently performed in fundraising skits and shows, many of them for Winnipeg-based soldiers and airmen during the war.

As an adult Marion switched her volunteer commitment to ORT, where she served as secretary of both the Sa'ad and Ramah chapters, and to the Ladies Brandeis Lodge, where she volunteered as secretary and was voted �Lady of the Year' in 1964. Additionally, Marion was active with NCJW, helped organize events for the 1967 Pan Am Games, taught English to illiterate adults, and most recently, volunteered with Meals on Wheels and as a friendly visitor with Jewish Child and Family Service.

Ironically, Marion also enjoyed a long and rewarding career as an Executive Secretary at Great West Life Assurance Company, a company that had at one time been known not to hire Jews. In fact, when Marion graduated high school, she and six other Jewish girls who were at the top of the class, were surprised to learn that classmates who were not as good students, were being offered jobs that were not being offered to them because they were Jewish. Great West Life was one of these offending companies. Fortunately, times changed, and l6 years later Marion began working there. She remained there for 25 years and had wonderful bosses and made many friends, some whom she still sees today.

Marion met her husband-to-be Ben Silverman, one of the four Silverman brothers that also included Sid, Morley and Allan, at a dance in Lockport the night of her high school graduation in 1942. When she broke the heel of her shoe her escort introduced her to his friend Ben who, like a good Boy Scout, was always prepared and so had a toolbox in the trunk of his car. Ben fixed her shoe and shortly after they began to date. Marion became Ben's �Cinderella.' They were married on Feb. 17, 1946 at the old Peretz Shule after Marion's oldest brother Abe carried her out of the house to the cab so that her gown and shoes would not be ruined in the snow.

While they were married for only 30 short years before Ben passed away in 1977, they had many great times together. Ben was an avid sports fan and excellent hockey goalie, and a big fan of the big bands. He formed the Bluebird Swing Club and was a great jiver and boogie woogie dancer. He taught Marion how to dance and they once won first prize at a dance contest. He also had a great collection of 78 records, which Marion has transferred to tape and continues to enjoy. Ben loved his work as an electrician and electrical contractor and all the neighbourhood children knew they could bring their broken wagons or bikes to him to fix. Both Marion and Ben loved bowling in a Sunday night league and had about 45 trophies on display in their rec room.

Marion and Ben had two daughters, Linda Maguire and Leslee Silverman. Linda, who is now a mother to Rachel, graduated as the silver medalist in Judaic Studies at the University of Manitoba and taught elementary school for 30 years. Leslee, the Artistic Director of the Manitoba Theatre for Young People, has received many career related awards and accolades, including a Governor General's Silver Jubilee Medal, the Province's first "Artist of Distinction Award" and the YWCA "Woman of Distinction Award."

Today Marion busies herself with many hobbies including reading, knitting, bridge and mah jong. She also has collected a book full of Yiddish expressions from her mother's generation, such as "achasuren de kalah es shi shien" ("a fault because the bride is too pretty"). She takes pride in the Winnipeg Jewish community and is confident that it will continue to thrive and to grow. She hopes to be remembered as a true friend and as a pleasant person who nonetheless was not afraid to �call a spade a spade.' She also hopes that her family continues to appreciate the good moments that life has to offer.